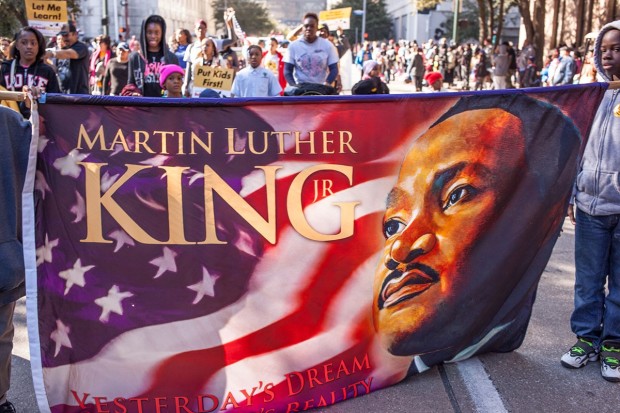 Houston’s 43rd annual MLK Parade takes place virtually from 10 a.m. to noon and also features a simultaneous “Parade of Giving” to collect donations for families most affected by the COVID-19 pandemic.

Martin Luther King, Jr. was a powerful orator, an inspiring Baptist minister, and a dedicated father and son. Perhaps most importantly, he was instrumental in leading the Civil Rights Movement, and his message – of freedom, equality, justice and love – is one that remains intact today, more than 50 years after he was assassinated.

To honor Dr. King’s legacy, Houstonians are invited to attend the 43rd annual Martin Luther King, Jr. Day Parade, taking place virtually on Monday, Jan. 18 from 10 a.m. to noon. The parade, hosted by the City of Houston and the Black Heritage Society, will feature footage from the nation’s very first MLK parade, which took place here in Houston. The event’s theme is “Truth, Love and Justice,” and it will also include entertainment, such as the University of Houston marching band and the Booker T. Washington High School Band. The event is available to watch here.

Happening simultaneously is a “Parade of Giving,” where Houstonians can donate items to those who have been affected by the pandemic. The drop off takes place at 5225 Calhoun Road, and the items in need include blankets, water, old coats, socks, and soap. See a full list of accepted items plus more details here. Local nonprofits the World Youth Foundation and St. John’s Downtown will be distributing the items to those with the greatest need.

Words of Inspiration from MLK

As we celebrate MLK day, we’ve rounded up some quotes from the civil rights leader that we found most inspiring. We’ve also included a list of his works and additional resources to learn more about Dr. King.

1. “Every man must decide whether he will walk in the light of creative altruism or in the darkness of destructive selfishness.”

2. “We must use time creatively, in the knowledge that the time is always ripe to do right.”

3. “An individual has not started living until he can rise above the narrow confines of his individualistic concerns to the broader concerns of all humanity.”

4. “I have decided to stick with love. Hate is too great a burden to bear.”

6. “Our lives begin to end the day we become silent about things that matter.”

7. “Change does not roll in on the wheels of inevitability, but comes through continuous struggle.”

9. "I have a dream that my four little children will one day live in a nation where they will not be judged by the color of their skin but by the content of their character.”

10. “Life’s most persistent and urgent question is, ‘What are you doing for others?'”

The Martin Luther King, Jr. Research and Education Institute
The King Institute at Stanford University provides access to tons of documents, photographs and publications relating to King’s life and work.

The King Center for Nonviolent Social Change
This non-profit organization in Atlanta is dedicated to educating the world on MLK’s legacy. The organization also leads nonviolence trainings, organizes efforts to get out the vote, and runs a youth leadership academy.