Kinkaid implements affinity groups as a way to foster dialogue 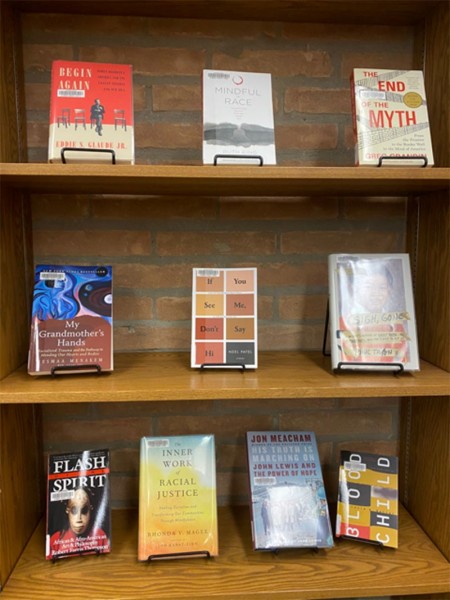 The librarians at Kinkaid Upper School's Moran Library have carefully put together a bookcase full of novels from BIPOC authors and with BIPOC characters to promote diversity in literature; the reading choices keep shifting each month.

Given the racial tensions that have arisen over the past year, Kinkaid has taken various measures to create an inclusive environment for all students.The English curriculum was altered and both a Diversity, Equity, and Inclusion council for parents and a student-led Diversity Leadership Board were created. One of the most recent measures the school has implemented is hosting bimonthly affinity groups throughout the Upper School.

Affinity group time was already present in a more abstract way during online school for the first half of the year, but now that all divisions of the school are back in-person all five days a week, the program has been solidified.

After school every other Friday, starting January 8, students of various racial and sexual identities gather to share their experiences as a member of said group and have time to reflect with each other. This is a totally voluntary process and those who do not feel comfortable sharing are dismissed for the day.

Kinkaid started with 11 inaugural affinity groups and hopes to expand the scope of their program in the future.

The inaugural groups are as follows:

Head of Upper School Peter Behr explained that to participate in the affinity group program, one would need to be able to speak from the ‘I’ perspective and approach discussions with a positive mindset, sharing their own experiences earnestly and not judging others for their perspectives, thus fostering a caring environment for all.

Mr. Eric Emerson, Upper School debate teacher, facilitated the East/Southeast Asian Affinity Group. They both were pleased to see a lively discussion and all members of the affinity groups actively participating.

“I think affinity groups are a crucial space for students to have collective discussions, to share personal experiences, and to affirm our differing identities in spaces that are authentic,” Mr. Emerson said. “Too often those discussions are not feasible in traditional classrooms focused on core subjects or around dominant groups who may not share or understand the experience. It was a great moment of calm and a space of reflection against the backdrop of much turmoil and stress in 2021."

Students agreed it was a great bonding and reflective experience for students of South Asian heritage and they eagerly look forward to the next group meeting.