Out of the crib 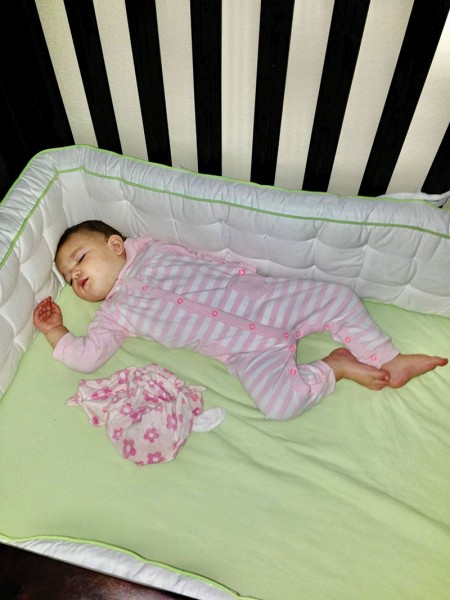 THE GREAT ESCAPE Elyse Gonzalez, here at 14 months, and her two sisters all learned how to climb out of the crib at 18 months old.

One does not realize how important it is to feel rested and ready to take on the day until sleep becomes a precious and limited commodity.

That happens when you have small children who will not stay in their cribs. It is a scary moment when you realize your wiggly, squirmy toddler has suddenly mastered climbing out of the crib, previously the only place he or she could not escape.

One Buzz mom splurged on the fanciest, magazine-worthy crib in Highland Village. “It was our first baby, so I wanted to have a really pretty crib,” she said. The crib had gray, neutral colors, with paneling on the head and footboards and soft upholstered tufting.

The crib was delivered and set up, with striped curtains and a white shag rug. The nesting continued with crib bedding, washed and prepared. Their baby arrived – a girl, and she slept like an angel in her beautiful crib. Swaddled up, she would be exactly where they placed her the following morning.

Fast forward about 18 months. The fancy crib became the now-toddler’s playhouse, and she learned that when she pulled herself up and threw one leg over the side and kept pulling, she could escape. The parents scratched their heads and wondered, like so many parents in these shoes, what to do. Leave her in the crib and continue battling her escape plan or transition her into a bed?

The parents were exhausted, but they decided they did not feel ready to move her out of the crib, so they improvised. “We got desperate,” the mom said. “My husband took the mattress and unscrewed the bottom of the bed and put the mattress on the floor so she could not climb out.” The sides were too tall for her to grab.

That solution worked for a little bit and bought them some more time before they converted the crib into a toddler bed (which a lot of cribs these days can do – they come with a conversion kit).

It can be challenging to move a toddler from a crib to a bed. Timing is important. If the child is too young, not having those walls surrounding them might scare them. They might be safer in their crib to avoid rolling out of bed (although bed rails are an option) or getting out of bed at night, that is, if they cannot climb out of their crib already. Not all kids master that skill or realize they can.

Most parents who use a crib transition their children out of it in a timeframe that works best for their household and the child, but it usually starts around 18 months at the earliest. Some kids might stay in their crib until age 3 – if it is working, why make the big change?

Sue Hurley’s son Conor, 3, surprised her one morning. “I remember one of the first times he crawled out of his crib,” said Sue. “It was a complete shock. He climbed out in the morning, made not a peep, walked down the stairs, and came into our bedroom and woke us up. We were so disoriented.” They soon moved him to a bed.

For parents Kevin and Marie Gonzalez, by the time their third child, daughter Elizabeth, now 3, was 18 months old, she was climbing out of her crib. Like most parents, they decided that was their signal – time to move her into a toddler bed.

However, her first nights in her new toddler bed did not go as planned, and instead of falling asleep and staying in her bed, Elizabeth was climbing out each night. They were exhausted.

They purchased a crib tent. A crib tent is made of soft mosquito netting. It is tied onto the sides of the crib, creating an escape-proof dome over the baby. Marie said Elizabeth was skeptical at first, judging from her expressions, but she quickly adjusted to the new mesh dome.

Sleep is valuable, and there are no rules in the theoretical manual of parenting that no one owns, so if the child is getting the appropriate amount of sleep, whether in a crib or a bed, that’s a win for everyone in the household.