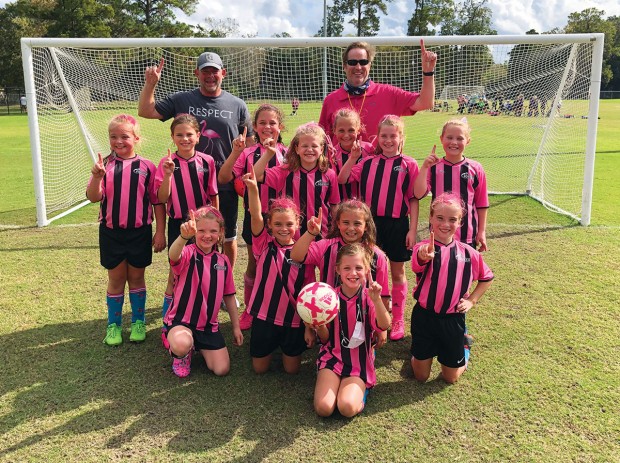 After a competitive match-up against the Falcons, The SBMSA Pink Flamingos (pictured) won the 8U girls championship cup. The Pink Flamingos, who attend Second Baptist School, were down 0-1 when Annie Beecher evened the score by converting a goal off of a cross by Carson Kelly. With a 1-1 tie at the end of regulation play, the game moved to penalty kicks. Finally, in the fourth round of sudden-death penalty kicks, Maddie Reiner made the game-winning goal with a great strike to the far right corner. The Pink Flamingos are (top row, from left) coaches Phil Kelley and Ralph Manginello; (second row, from left) Elise Brannan, Madeline Dillard, Mia Lurie, Molly Goolsby, Mazie Arnoult, Carson Kelley, and Annie Beecher; (third row, from left) Ava Nolen, Kennedy Carroll, Caroline Walsh, and Mary Emma Allen; and (front row) Maddie Reiner. Not pictured: Natalie Nix.