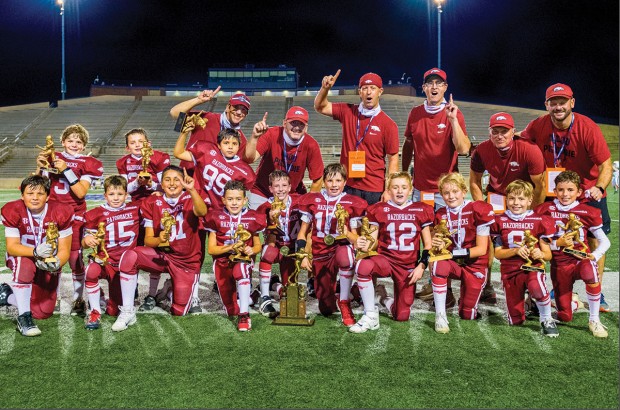 SBMSA’s JV-tackle Razorbacks (pictured) wrapped up an undefeated season with a 20-6 victory at the Tully Bowl. The team dominated the regular season with a 10-0 record, outscoring their opponents 290-59 over the course of the season. Amazingly, the Razorbacks were the smallest team, with the lowest combined weight in their division. The Tully Bowl was a hard-fought game against the Patriots, and the Razorbacks were up only seven points going into the fourth quarter. Strong defense was essential to their victory. The winning Razorbacks are (top row, from left) coaches Michael Robertson, Clint Cobb, Brian Richardson, David Slye, Kirt Adams, and Clayton Gring; (bottom row, from left) Anthony "T-Train" Ori, Addison Pate, Cade Cobb, Peyton Powers, Carter Khalil, Robbie Cestero, Beckett Richardson, Jackson Cobb, Wade Gring, Clark Slye, Weston Adams, John Michael Robertson, and Mason Powers.