The Show Must Go On at Stratford High School

School Buzz
Sign in to buzz me about School Buzz
Click the Buzz Me button to receive email notifications when this writer publishes a new article or a new article in this column is published. 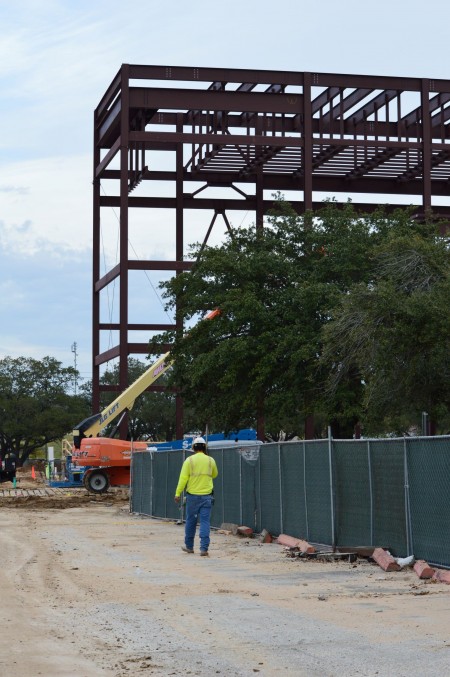 Undergoing a major change, the Stratford Playhouse Theater continues construction, with hopes of a bright future. The construction team's current progress shows the two-story auditorium reaching for the sky, as the frame is almost complete.

COVID-19 has affected the normal function of schools everywhere and changed the way students learn. Most affected is the fine arts department. The Stratford Playhouse has made huge changes to their performance schedule this year. The upcoming show Nunsense was originally planned for early September. Now, it has been pushed to late January. The Playhouse’s “Big Show,” Something Rotten, will take place in March, and the spring play, Puffs has been cancelled.

When asked what the transition was like for the teachers in the theater department, Choir Director Gyasi Blanton said, “It wasn’t a transition; you do it or you can’t do anything.”

Lead Director CeCe Prudhomme added, “If they’re having football and basketball games… then we aren’t going to totally shut down the arts because of a pandemic.”

Theater teacher and Director for Nunsense, Alyssa Davidson said. “My overall job is to make sure that I’m cultivating opportunities to perform, to express, and to tell stories. If that means we have to compromise a little bit this year, then I think it’s worth it.”

Along with the pandemic, the Stratford Playhouse has had to move venues due to the construction of their new theater, which is planned to be completed the spring of 2022. The upcoming show Nunsense, which will open January 29, will be performed at Queensbury Theater, and Something Rotten will be at Zilka Hall.

“We have to rehearse in a lot of different places. It was going to be hard already, but then adding COVID-19 to it makes it a lot harder,” Prudhomme attested.

Marcie Baker, Lead Choir Director at Stratford, shared the difficulties brought on by not having a theater. The annual Wassail Concert had to be held outside in the parking lot. “The theater’s what people lean on whether they realize it or not. Different forms of theater are what get people through tough times,” says Davidson.

According to Blanton, “Music, theater, and fine arts in general are important aspects in the community,” which is why it’s so important to support the dreams of theater students everywhere, not just at Stratford High School. And, as the theater has taught people for generations; the show must go on!