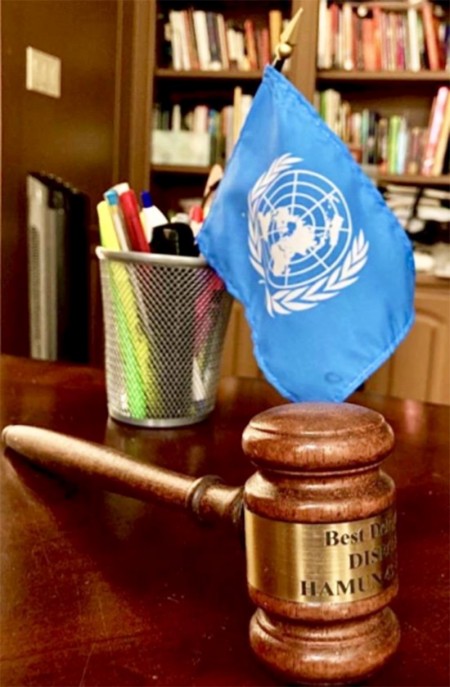 This prestigious conference was hosted for the 46th time by the University of Houston. Despite the virtual format, HAMUN brought new topics, crisis committees, and global simulations to the table. Delegates debated topics that spanned from foreign military intervention to the French Revolution to the Salem Witch Trials. VHS students did not fail to impress.

“Over the course of the past year or two, we’ve formed friendships and bonds that have really allowed us to maintain our team spirit virtually,” said sophomore Divya Khatri, a UNHCR delegate at HAMUN. “We really hyped each other up with all these individual victories. Everyone was just as loud and cheerful as they would have been in person on their zoom screens during the awards.”

With a wide range of topics and committees, the conference served as a student simulation of the events that have occurred or are currently ongoing around the globe. Students, referred to as “delegates”, are assigned countries to represent in one of the UN's numerous committees and required to debate pre-set topics.

Before the conference, they were required to research the background of their country, their country’s position on a specific topic, and prepare possible solutions. Students convened at the conference to discuss problems and identify solutions through negotiation and voting procedures. Specialized crisis committees, on the other hand, were simulations of historical events in which major characters of the events or movements are represented by students.

MUN gives students a chance to embrace a global mindset and actively change the course of history with their voice in crisis committees.

“This year, I got the opportunity to speak about the humanitarian crisis in Yemen, a topic of special interest to me,” said senior Maria Morkas, the team’s Under-Secretary General. “Every year at HAMUN, I see fresh topics brought to the table with so much room for debate, and I truly feel grateful having the opportunity to learn about world affairs at this level.”

For a while, HAMUN stopped announcing the Best Large Delegation award, but to the team’s surprise, they did this year. Being named the best MUN team in all of Houston was a moment of pride like any other for our delegates.

“Beyond the amazing amount of individual recognition that our team got, the best large school delegation means so much, because I truly believe we are,” said senior Dhruv Saligram, the VHSMUN team’s leader and Secretary-General.  “While our team has so much raw talent that it’s genuinely unbelievable, what truly makes us the best school is the hard work that we put in. Whether it’s a brand new or veteran delegate, I see each and every one put the work in and find ways to improve, no matter what. So regardless of the individual results, that Best School Delegation is an award that we all won.”

Despite the many opportunities and victories we saw at HAMUN, the conference itself was a mildly disorganized experience, with last minute character switches, delayed background guides, and award ceremony interruptions.

“It was disorganized because there are definitely technical issues that come with every conference or tournament,” said sophomore Caroline Hsu, an attendee of the conference. “We had to wait an hour for the awards ceremony to start and by the time it had started, the video had also restarted multiple times. However, there was definitely good organization in our committee, as there were no zoom problems with the breakout rooms or anything.”

Overall, even virtually, HAMUN 46 was an unforgettable experience with exhilarating committees and promising memories. After this conference, the VHSMUN team is bidding farewell to its 15 seniors on a team of around 30, as they attend this conference for the very last time.

“This is my third and last year attending HAMUN,” said Morkas. “It was the first MUN conference I ever did, so some of my best memories were made here. I couldn’t help but feel the four years of commitment to this club rush over me, as I gave one of my last HAMUN speeches, ever. Even though this was a virtual experience, I was able to celebrate with my team, my family, and I couldn’t be happier with how the experience turned out in the end. I couldn’t have asked for a better end to my four years of high school MUN.”

Individual results were as follows: