What to Watch This Month 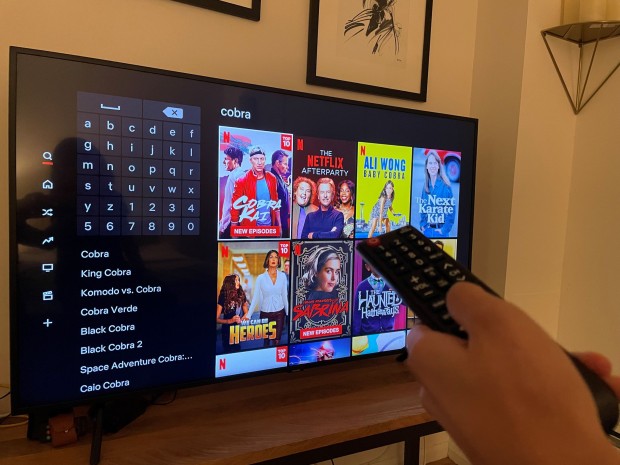 Included on Pooja Salhotra’s list of favorite television shows and films to stream this month is Cobra Kai, a sequel to The Karate Kid film series.

With the start of the new year may come a resolution to watch less television. But, who are we kidding. Even though it’s 2021, we are still in the midst of the pandemic, after all; and television is one of those mindless activities that helps us distract ourselves and escape from the stress and craziness that comes with COVID-19.

So, if you need it, consider this your permission slip to watch more television in 2021. Here’s my list of shows and movies – both old and new – worth streaming as we continue to push through some tough times this year.

Soul
Film (2020)
Disney+
I subscribed to Disney+ just to see this film on Christmas day, and it was worth the $6.99 and 107 minutes of my time. The film follows music teacher Joe Gardner as he finds himself in an alternate universe. There, he’s a soul about to enter the “Great Beyond,” or the afterlife. Not wanting to die before he gets his big break as a jazz musician, Joe tries to reconnect his soul to his body. Along the way, he learns important lessons about what matters most in life. The animation is impeccable, the storyline interesting and the characters compelling. It’s also notable as the first Pixar film to feature an African American as the protagonist. I’d highly recommend this film.

Cobra Kai
Television Series (2018-2021)
Netflix
This show is based on The Karate Kid film series, set 34 years after the original film. It even features the same cast: William Zabka as Johnny Lawrence and Ralph Macchio as his rival, Daniel LaRusso. Only now, they are all grown up. This series pairs nostalgic ’80s comedy with choreographed martial arts, teen drama, and well-written characters who you grow to love and root for as they navigate some pretty wild challenges. Season 3 released on Netflix on Jan. 1, 2021. Let’s just say I’m ready and waiting for Season 4.

Easy A
Film
Netflix
This film was added to Netflix last November, and I’d highly recommend a re-watch (or a first time watch if you haven’t seen it). Emma Stone delivers a strong performance as Olive, a 17-year-old who suddenly becomes the center of attention at her high school when one lie blows way out of proportion. The rest of the cast is just as exemplary: Amanda Bynes as a judgy Christian, Stanley Tucci and Patricia Clarkson as Olive’s hippie parents and Lisa Kudrow as the guidance school counselor. Literary buffs will especially love the references to Nathaniel Hawthorne’s The Scarlet Letter.

Song Exploder
Documentary Series (2020)
Netflix
If you are a music junkie, this series is for you. In each episode, a different musician or band delves into the creative process behind one of their hit songs. Featured artists include Dua Lipa, The Killers and Alicia Keys. By the end of an episode, you get to know an artist’s personal story and inspiration a little better. Each episode is less than 30 minutes, and you can pick and choose based on which musicians you are interested in.

Taste The Nation with Padma Lakshmi
Television Series (2020)
Hulu
This show features Padma Lakshmi, the actress, cookbook author, and activist, traveling the country to discover American food – a blend of different cultures, cuisines and heritages. Lakshmi also explores how immigrants shaped the culture of each city she visits and she doesn’t shy away from the controversial topics that come up along the way. At a time when most of us can’t travel, this show is a nice opportunity to learn about other parts of the country. Lakshmi explores everything from the burrito to the hot dog to ceviche in this Hulu original.

The Wedding Planner
Film (2001)
Hulu or Netflix
This is one of those rom-coms I’ve seen at least a dozen times. Watching it again in the midst of the craziness of 2020 was nothing short of a delight. Jennifer Lopez and Matthew McConaughey star in this sweet romance that reminds us that love has no rules. I will admit that some of the jokes in this film have not aged very well. At least they remind us of how culture has evolved over the past 20 years, though.

The Founder
Film (2016)
Netflix
This biopic tells the true story of how Ray Croc, a struggling salesman in Illinois, made McDonalds a multibillion-dollar enterprise. It’s a story of what happens when greed, power and ambition go up against morality. If you don’t know how McDonalds went from one single shop in San Bernardino to the largest fast food chain in the world, you’ll definitely learn something new in this film.

Catch Me if You Can
Film (2002)
Netflix
This film makes my list because it’s only streaming on Netflix until the end of January – watch it while you can! It’s the type of film that’s so entertaining you don’t want it to end, even though it does have a satisfying ending. Leonardo DiCaprio and Tom Hanks star in this Steven Spielberg film based on a true story of a skilled conman and the FBI agent who becomes obsessed with tracking him down.

Pretend It’s A City
Documentary Series (2021)
Netflix
This show is basically the Fran Lebowitz show and an ode to New York City. I live in New York City so I’m a bit biased on this one, but I do think anyone with any connection to the Big Apple would find this show amusing. It’s a bit excessive, I’ll admit (do we really need seven episodes?) but Fran is an insightful character with no shortage of funny stories to tell. I’d recommend throwing this one on in the background while you’re cleaning your living room or eating lunch.

Bridgerton
Television series (2020)
Netflix
I have to admit, I only just started watching this show so I can’t provide my full review. But, I keep hearing about it from sources whose opinion I regard highly, so I thought I’d put it on the list. The show, created by Chris Van Dusen (the same guy who made Scandal) and produced by Shonda Rhimes (the woman behind Grey’s Anatomy, Private Practice and more), is based off of Julia Quinn’s historical romance novels set during Regency London, at a time when women are presented as debutantes when they reach marriageable age. The show has been applauded for its diverse casting and engaging plotlines. It is definitely for mature audiences only.