5 Books That Will Hold Your Attention During These Stressful Times 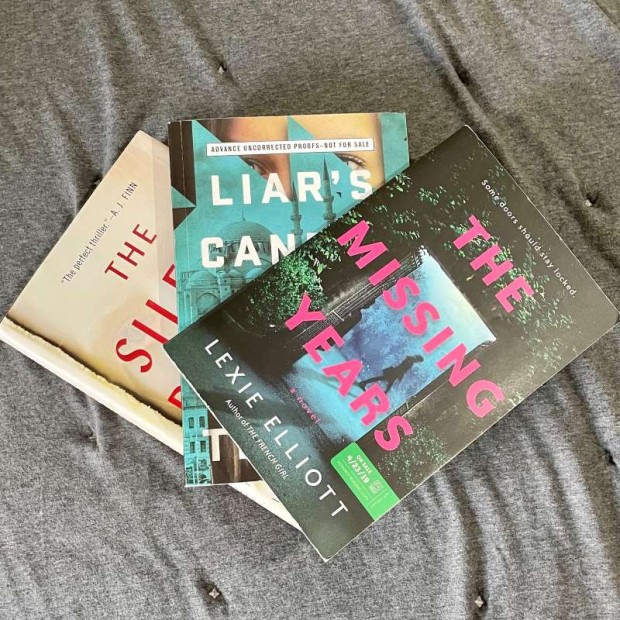 Need a good distraction? Pick up one of these five mysteries.

So far, 2021 has not been nearly as calm as I had envisioned it would be. I hope everyone in Houston survived last week and fingers crossed things will only get better for the rest of the year! We all deserve it.

At points during the past year and again last week, I have found it hard to focus on reading. The stress keeps chipping away at me, and I struggle to get drawn into a story. My attention just seems to constantly wander.

I have found that the mystery/thriller genre is the only genre that consistently seems to hold my attention during these times, even when my anxiety is high. I decided to choose 5 of my favorite mysteries/thrillers that really drew me in and did not let go until I finished each one.  Hopefully if you need a good distraction, they will do the same for you.

Girls Like Us by Cristina Alger - A true mystery in the best sense of the word, Girls Like Us features FBI agent Nell Flynn who has come to Suffolk County, on Long Island, New York, to handle her homicide detective father’s affairs following his untimely death. Soon after she arrives, the local police force asks her to consult on a case involving the deaths of two young women. The more she investigates, the more Nell becomes convinced that her father was involved in their deaths and that someone is covering up his tracks. Beset by questions and uncertainty, Nell struggles to solve the murders amid doubts about the way the case is being handled by the local police. The story is told from Nell’s first person perspective which works perfectly. Alger’s prose is crisp and succinct, and the pacing of the story is flawless. Her carefully-crafted characters almost leap off the page, and the tense, taut storyline will keep you on the edge of your seat.

The Last Time I Lied by Riley Sager - The Last Time I Lied is a fantastic thriller. Sager drew me into both the story and the setting quickly causing me to turn the book’s pages as fast as I could to see what would happen next. Sager sets his second novel at a summer camp for girls called Camp Nightingale. The dual timeline plot alternates between 15 years ago and present day. In the earlier time period, Emma Davis shared a cabin with three girls who disappeared early morning on July 5th and never resurfaced. In the present-day tale, Emma is asked to return to the newly reopened camp to teach art. While she is hesitant to return, Emma also wants to solve the mystery of her missing cabin mates. Sager masterfully paces the story so that little tidbits of information are slowly released constantly shifting the reader’s idea of what might have happened. Every time I thought I had it figured out, another detail surfaced that poked a hole in my latest theory. I highly recommend it – clear your schedule before you pick it up because you will not want to stop reading until you reach the last page!

Liar’s Candle by August Thomas - Liar’s Candle is an incredibly well-written spy novel with an authentic and believable cast of characters and a page-turner of a plot. Penny Kessler is an intern at the U.S. Embassy in Ankara, Turkey who survives a bombing of an Embassy party and is thought to have information on the bombing which causes her to flee for her life. August Thomas provides just enough backstory on Penny to make her a plausible heroine and keeps the reader guessing on the rest of the characters – who is truly helping Penny and who is trying to further along her demise? Liar’s Candle is fast-paced, relentless and such a fun read. My favorite part of the book was Thomas’s seamless inclusion of details about Turkey including the culture, the food, the politics, and even several historical areas. To me, that is what sets Liar’s Candle apart from other books in that genre – the sense of time and place were phenomenally crafted. The book is a treasure and well worth the read.

The Missing Years by Lexie Elliott - When Alisa Calder’s mother passes away, she inherits half of the house she lived in as a young child in a remote part of Scotland. Her father has been missing since she was young, and he owns the other half of the house. Alisa resolves to find her father and solve the mystery of his disappearance. A combination of gothic tale, ghost story, and a missing persons case, The Missing Years is a true page turner with just the right amount of suspense, character development, and red herrings. The setting plays a large role in the story, and Elliott’s descriptions of both the house and the Scottish Highlands will transport the reader into the tale and the locale. Elliott opens each chapter with a different paragraph describing what might have happened to Alisa’s dad. These creative and thought-provoking alternative lives that he might be living add significantly to the book and frequently tie in with some aspect of the subsequent chapter. While I loved the entire book, this feature is probably my favorite aspect of the story. The Missing Years will delight mystery readers and anyone who loves a well-told story.

The Silent Patient by Alex Michaelides - As the book opens, Alicia Berenson, a well-known painter, has been in a psychiatric facility for six years following her gruesome murder of her husband. She has not spoken since the crime occurred, refusing to provide an explanation for why she murdered him. Her refusal to speak has caused the public to become fascinated with the crime and her motive, and the price of her art has skyrocketed. Theo Faber, a criminal psychotherapist, seeks to work with Alicia; he is determined to find out her motives and get her speaking again. The story alternates between Theo’s perspective and Alicia’s diary entries from before the crime occurred. There are several fabulous twists and turns, and the ending is simply stunning. I certainly did not see it coming which made for a fantastic read. The Silent Patient is a page turner, and you will not want to put it down once you start reading.

I would love to hear what you have been reading!  Feel free to drop your recent reads in the comments below.