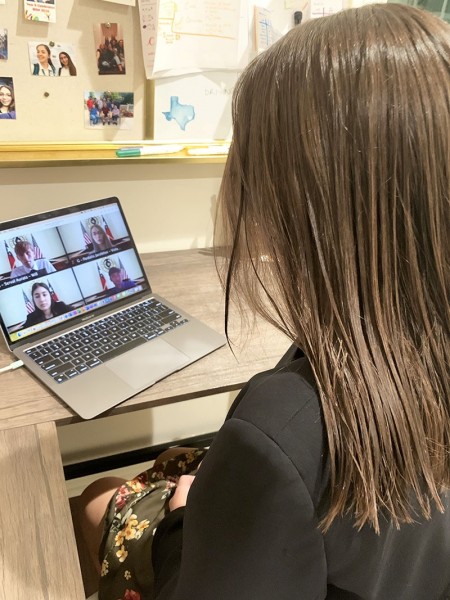 Will H, Viola H, Sana M and Harish P competing in the semi-finals over Zoom.

On February 6 and 7, BIS Houston’s Mock Trial team participated in the 42nd Texas State Mock Trial Competition. Last year, the team competed against the two finalists of the district competition but did not make it to the state competition. The proceedings looked a bit different over Zoom but BIS Houston rose to the challenge with coordinated background images and some amendments to normal trial proceedings.

The team this year consisted of prosecution attorneys Harish P., Sana M. and Jasper L., as well as defense attorneys Greg M., Elliot A. and Maria-Laura P. Meanwhile Viola H., Will H., Henry P. and Emma R. each played witnesses in the trials.

Getting an early start, the team met over Zoom at 8 a.m. to discuss any last-minute issues before the first trial at 9 a.m.

Drawn first was the prosecution team, who then had to argue their case over the next two hours before a real judge and jury of lawyers. Sana M. said after the trial,

“I think this year’s case went really well. Giving the opening statement was very nerve racking, especially over Zoom," said Sana. "However, I believe that our team performed phenomenally and I’m excited to see how the trials proceed.”

Next was the defense case, which got a bit of a late start due to technical difficulties but were still able to deliver their argument clearly and persuasively against the opposing team.

The semi-finals were supposed to happen later that night at 5 p.m., however a delay on the judges’ side meant there was no news until around 8 p.m. as to who went through to the 4 semi-final spots. Late that night, the team assembled one last time to be informed that they had made it to the semi-finals for the district competition! The prosecution would compete tomorrow and the two best teams in the trials would go through to the state competition.

Meeting once again before the trial at 1 p.m., the team looked over their case one last time. This was it. If they won this, they went to state.

The prosecution fought long and hard the next couple hours, questioning and objecting and arguing. Fighting just as hard was the other team, one of the four who made it to the semi-finals. When it was all over, everyone was exhausted. But they still had to hear the results.

Entering a new meeting room, the four teams were fortunate to have the opportunity to hear the words of Chris Tritico (well-known defense attorney) reflecting on his past experiences in law and talking about the importance of integrity. The judges were also able to say a few words, inviting the mock trial participants to contact them if they wanted to view a real trial over a video calling platform, or wanted any advice on law.

It was the moment of truth. A bell rung like a drum roll as the judge read out the names of the schools advancing to state. BIS Houston’s team had done all they could. This was the farthest they had ever gotten in the mock trial competition.

The names were called; Providence and St. Thomas would be moving on.

Understandably the team was disappointed, however they were still proud of how far they had gotten. Gathered one last time in their personal Zoom room, they reflected on all their achievements over the past few months and started looking forward to next year. The score cards for the trial would come in a few weeks, allowing them to hold a ‘Mundies’ award ceremony (like the Dundies) and celebrate their performances.