From Boys to Men: Friends 'til the End 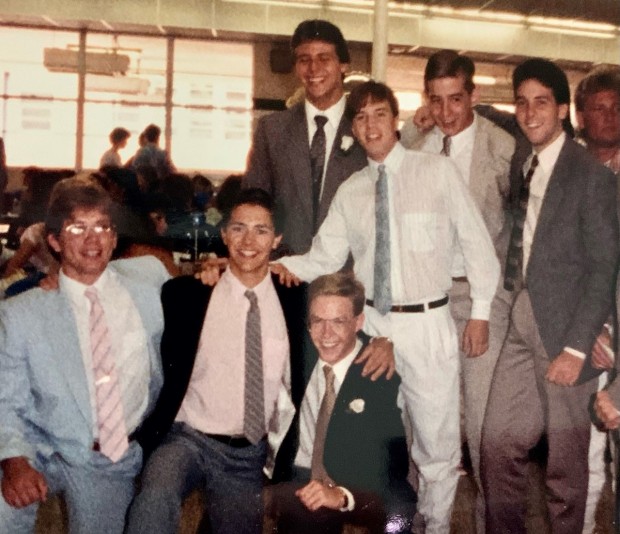 Childhood friends John Shelby and Kevin Leonard have loved living in Bellaire with their families the past twenty-plus years, but still get nostalgic recalling their idealic childhoods growing up in the quaint little town of Pasadena, Texas.

As fate would have it, sandlot football, honors math and science, the ever-important school cafeteria lunch table, and listening to substantial amounts of Rush brought them together.

One guy group member shared he became a member of the “gang” by drinking a 16-ounce Schlitz Beer in high school. Another joined by socializing with them and explained “socializing” is polite code for drinking and partying.

In their deluxe hand-me-down set of wheels, the crew roamed the streets of Pasadena, cruised into Houston, hung at the beach, took weekend trips, and engaged in misadventures that forged lifelong friendships.

“Our mid-to-late 20’s and our 30’s were decades of getting married, having children and working on careers,” Kevin reflected.

Even with busy lives, the group stayed connected by starting a book club. They used the term loosely. 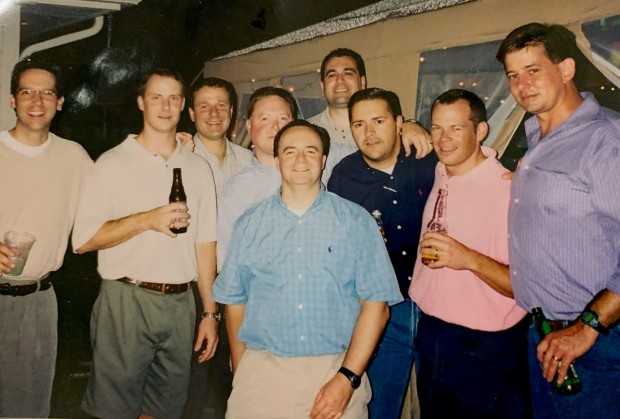 “I think the only book we ever read was The Great Gatsby,” John laughed. “We mainly drank lots of beers and made fun of each other.”

“We coined it the Bi-Weekly Roundtable Discussion Group (BWRTDG) and met every other Wednesday to discuss the book,” Kevin said. “This was before Facebook and other social media took off. We’d catch up on life, politics, work, and such while eating wings.”

There is also two trips every year to Las Vegas - one with just the guys and one with couples.

“We stay at far lesser accommodations with the guys than the wives,” Kevin said. “Instead of The Mirage or Bellagio, it was usually the Tropicana and two guys per room.” 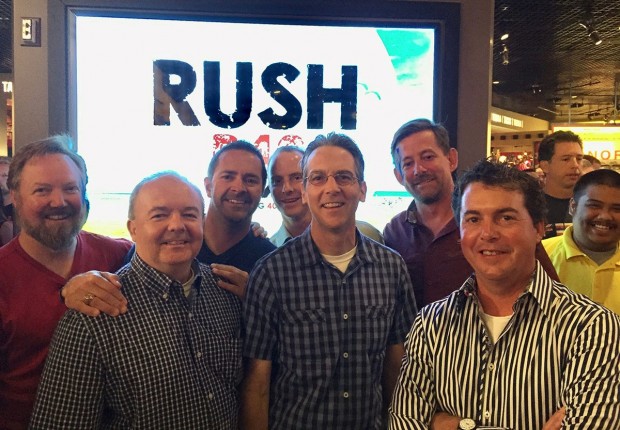 Rocking out with RUSH was the highlight of the the 2015 guys-only Vegas trip. Picture from left: Greg Etzel, Tom Campbell, Randy Dishaw, Kevin Leonard, Darren Skyles, and John Shelby (back)

The legendary 2015 guys trip to Vegas included the Rush concert at the MGM. The middle-aged Pasadena fans screamed the Tom Sawyer lyrics as loudly as their inner 16-year-old-selves.

For the past 25 years on December 23, the guys and wives have a highly anticipated standing date for their Seinfeld-inspired Festivus party. Every year, a Festivus pole appears for the airing of grievances. 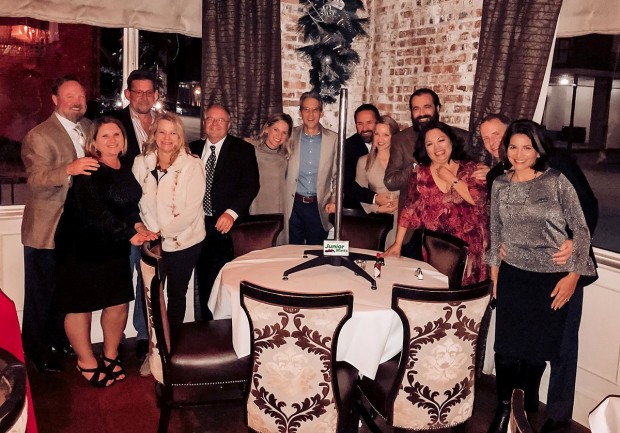 The guys and their wives celebrated Festivus at Brennan's in 2017. Pictured from left: Dedra and Greg Etzel, Suzanne and John Shelby, Tom Campbell, Rhonda and Darren Skyles, Randy and Grace Dishaw, Jim and Sylvia Mourtakos, and Kevin and Lucy Leonard.

Luckily, the wives have also bonded over the years.

“The guys always tell the same stories, and the wives say, ‘That story again!’” John laughed. “Most of them can tell them better than us.”

The groups’ email chain has been going since the late 90’s and sometimes has up to 100 emails a day.

“We will always be good friends, but definitely have a wide array of viewpoints which sometimes causes me to take a hiatus from the emails,” said John. “But when it is said and done, the friendship is stronger than it all.”

Kevin and John agreed the group would do anything for each other at the drop of a hat.

“Nothing is better than having a group to hang out with that can relate to you,” said John. “Anything worth keeping has to be worked on to keep it, including marriages and friendships.”

“Friendship is worth the time,” Randy Dishaw added. “Put the time in. I have been blessed by my friendships with these guys and I value them so much. Through good times and bad we have been there for each other and that is irreplaceable. Life is too short. Friends make life enjoyable and help you live it to the fullest.” 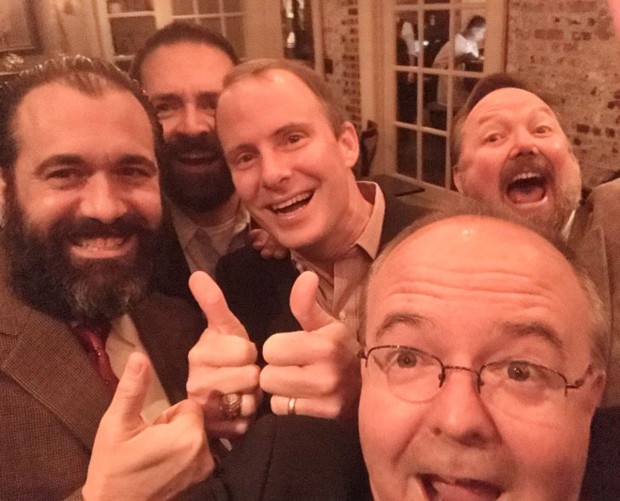 Jim Mourtakos, Randy Dishaw, Kevin Leonard, Tom Campbell and Greg Etzel (back) hijack Suzanne Shelby’s phone to take some fun photos. Just because you’re over 40 doesn’t mean you have to act over 40.

These pranksters grew up to become doctors, veterinarians, attorneys, engineers, businessmen, husbands, fathers, teachers, coaches, and pillars of their communities.

Those back-in-the-day shenanigans connected the friends for life, helped shape who they are today, and have kept them laughing all these years.

Studies confirm that bromances lead to healthier and happier lives. Whether with lifelong or newly met acquaintances, making space in your life for male friends is highly encouraged.

Listening to Rush and saying “I love you, Man!” optional.