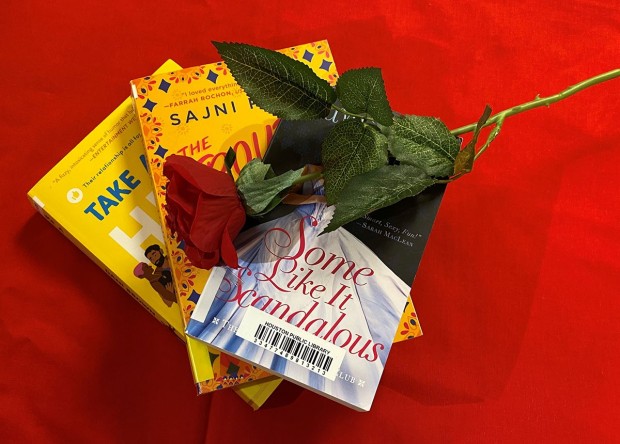 It’s still the month of love, so we are talking romance novels. I’ve been a fan of romance novels since middle school. My friends and I would swap paperbacks and giggle over all the ‘mushy’ parts. Honestly, not much has changed!

Some critics may look down their nose at the genre and dismiss it as mere fluff and not real literature. But romance novels are a multibillion dollar industry with tons of devoted fans. I will concede to one criticism of the genre. Over the years as an industry, romance has its problematic elements in terms of diversity of characters and authors. There were even issues with depictions of consent or healthy relationships. However, efforts are being made to change that with some fantastic up and coming authors.

With a bit of research (and advice from a librarian), you can find some diverse romance reads. And to those who say romance is formulaic, so are other genres. No one ever says that Agatha Christie is a pretty good writer but the way someone always dies really started to wear thin after a while. Of course not! She was a master of her craft and could make each story unique. The same is true of romance novels. So here are some titles (mix of historical and contemporary) that take some of the tried and true plotlines and make them exciting and new.

A Week to be Wicked by Tessa Dare (Spindle Cove series):  First of all, Tessa Dare is a librarian herself. Second of all, her books are amazing! Dare specializes in writing historical romances that appeal to modern sensibilities. Her heroines are always fully realized characters with amazingly supportive groups of friends and family. Brainy Minerva is a spinster by choice, much to the frustration of her marriage-minded mother. She comes up with a rather daring scheme to attend an academic conference to present her exciting new fossil finding. She'll pretend to elope with notorious rake Colin Sandhurst, who in her low estimation is the most vapid of viscounts. If he agrees to go along with the charade and take her to Edinburgh, she’ll split the prize money she feels sure to win. She plans on gaining respect from academics in her field and proving that women can be more than decorative. And with her ‘ruined’ reputation, her mother will finally stop flinging potential suitors her way. Colin gets a much-needed infusion of cash now that he’s been cut off by his father for his rakish ways. But the journey is far from smooth. By the end of the week, their strictly contractual relationship has grown into something they weren’t expecting. Minerva learns to relax and enjoy herself, and Colin finally has a worthy partner in his verbal sparring. Dare is the queen of snappy dialogue and placing her characters in offbeat situations that have you torn between laughing out loud and swooning.

Take a Hint, Dani Brown by Talia Hibbert (Brown Sisters series): When a video of being rescued from a trapped elevator goes viral, Ph.D. student Dani launches a fake dating scheme with burly security guard with a heart of gold Zaf. The reasoning is twofold: It will get her meddling family members off her back and raise the profile of a charity that is near and dear to Zaf’s heart. Dani, destroyer of hecklers, is bisexual, unapologetically brilliant and ambitious with a hilarious inner monologue. Zaf is a rugby-playing, secret hopeless romantic who always has a granola bar on his person for Dani. Hibbert goes beyond the banter and weaves in real emotional stakes. Dani's academic focus is filtered through the pressure of being one of a handful of women of color in her field and fear of rejection that she is somehow unlovable while Zaf’s work with his charity is a way of coping with anxiety and depression following a family tragedy and the constant othering and microaggressions he faces as a British Muslim.

Enemies to Lover (AKA from hating to dating):

Some Like it Scandalous by Maya Rodale (Gilded Age Girls series): Daisy Swann has a plan. Finish her chemistry degree at Barnard, turn her family’s facial cream recipe into a grand beauty empire, and live as a woman of independent means with her fortune. Being constantly thrown together with spoiled playboy Theodore “Theo” Prescott III is not part of that plan. Despite everything, more time together leads to the discovery they make a great team. Who would have guessed that Theo was a marketing genius? She isn’t the only one having to reconsider her assumptions. Theo finds her beautiful now and discovers working with Daisy created in him a sense of purpose and direction. Dare they make this partnership more than professional? First of all, for this series I must give several kudos to the setting and Rodale’s meticulous historical research. The rapidly changing society of Gilded Age America of the and the evolving role of women is a fantastic setting for a romance novel. Perhaps it give the Regency era romance a run for its money. Mix that in with a series featuring intelligent, independent female characters who aren’t waiting for rescue from a Prince Charming but are holding out for a partner who brings out the best in them and supports their dreams. How can you not fall in love with it?

The Trouble with Hating You by Sajni Patel: Liya is a happy-go-lucky twenty-something with a challenging job as a biochemical engineer, a close-knit circle of friends and all the fun and casual romances she could want. Despite this, her parents and many within her Indian American community see her as a disappointment for choosing her career over marriage. Her parents’ efforts to get her to settle down lead to an ambush blind date with the more traditionally-minded Jay. Liya is rightfully horrified and runs out. But Jay cannot be escaped as he becomes the lawyer brought in to fix her struggling company. The two of them butt heads at first, but slowly find common ground. Jay gains new respect for Liya’s work ethic and determination, and Liya learns he’s not just a smug know-it-all looking for a docile little wife. The various plot points may be familiar to many but, Patel makes them fresh and exciting with a diverse cast and thoughtful navigation of topics including identity, culture, religion, family expectations and personal dreams. Liya is a particular standout as a character. Her sometimes standoffish manner hides a lot of old hurts over a traumatic experience in her youth and the crippling weight of judgment and expectations from those who should love her unconditionally.

Friends to Lovers - because what’s more romantic than falling in love with your best friend?

Two Rogues Make It Right by Cat Sebastian: Another Regency era setting featuring William Sedgewick and Sir Martin Easterbrook, best friends since childhood, despite their class differences. When William learns that Martin is sick, and stubbornly refuses to take care of his health, the only logical option is to kidnap him to remote Sussex and nurse the fool back to health. But now they’re trapped in a one-room cottage and honestly, Martin is of the mindset that perhaps dying of consumption is a better option than having to confess he’s been in love with William as long as he can remember. Martin, gloriously prickly and sarcastic, has made pushing people away an artform after years of ill health and an unhappy childhood but William is his only weakness...or greatest strength. The comfort level, the history, the love between these two characters leaps off the page in every single word and glance. This is a book where ‘sweetheart’ and ‘idiot’ can both be used as terms of endearment in the right context. Even though the characters get together fairly quickly, it doesn’t lose plot momentum as our heroes move towards something like peace with their past and decide to dare happiness in whatever form, or for however long, they can grab it. I honestly recommend all of Cat Sebastian’s works for historical romance fans as she tackles all those beloved clichés--marrying to save the family estate, fleeing to the country to avoid scandal with characters who just happen to be gay, bisexual or nonbinary while also being incredibly thoughtful and respectful to the time period.

Bonus recommendations for those who love regency era romances or historical fiction in general but find them wanting in terms of diversity---may I introduce you to the wonders of the most awesome Vanessa Riley? She writes multicultural historical fiction and historical romances featuring characters that reflect her own African American and West Indian heritage. And she’s done the absolutely mountains of research, poring over census, baptism and marriage records and diaries to provide them with their rightful place in the books. As stated on her website, during Jane Austen’s time, as many as twenty thousand free people living in London. But there were only twenty-eight dukes during that era. Which were you more likely to run into?

Her latest title A Duke, the Lady, and a Baby features multiracial and ability diverse characters and an organization called the Widow’s Grace, a secret society that helps wronged women regain their status and find love again...or for the first time. For those who prefer their romance with an American setting, there’s the legendary Beverly Jenkins, who writes titles featuring African American characters taking place during the Civil War, Reconstruction and westward expansion.

The Flatshare by Beth O’Leary: Tiffy works days and is in desperate need of a new place to live. Leon works nights and is in desperate need of some extra cash. The solution is perfect: they’ll simply alternate occupancy of their flat. To keep things from getting awkward, strict boundaries are put in place and rules about comings and goings. But when their Post-it note communication goes from ‘I drank the last of the milk’ surface communication to heartfelt confessions about hopes, dreams, heartbreaks and little inside jokes, it gets complicated. Falling for your best friend is one thing, but is it possible to fall in love with someone you never met? This is a slow sweet romance with gentle humor, a charming supporting cast and absolutely perfect character voices---told in alternating POV between Tiffy and Leon and largely through their notes to each other you will absolutely ‘hear’ both in your head. I also adore the fact that Leon is a hospice nurse and is the more nurturing and romantic of the two. Let’s hear it for more romance novels that tackle gender stereotypes and toxic masculinity! I read this book in about a day and did so with a huge smile on my face and a sigh of bliss as I turned the last page. Can’t think of more of a recommendation than that.

If all of this still isn’t enough to satisfy your romance novel habit, then please ask your friendly librarian for more recommendations!