Even without parades, the joy of Mardi Gras marches on. Buzz neighbors throw out Mardi Gras stories as if they were tossing beads to a cheering crowd! 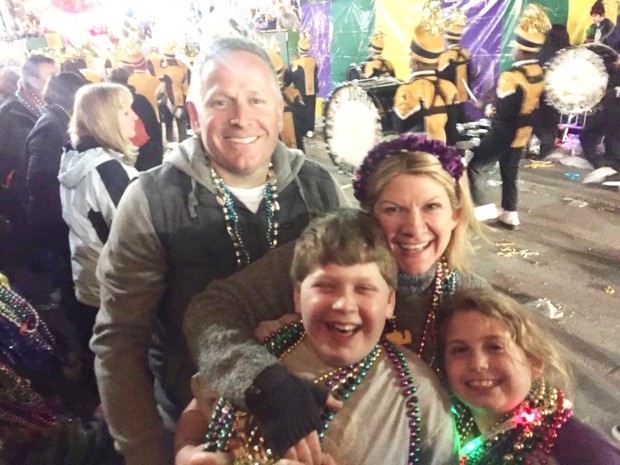 “It's hard to believe that Mardi Gras events won't be happening this year. But it's the right thing to do. As a nurse, I know we need to hang on a little longer for everyone's health and safety," shared West U neighbor, Louisiana native, band marcher, and float rider Staci Degregori.

To keep the spirit of Mardi Gras alive, Staci, her husband Roger, and their children Jack and Abby plan to make gumbo, eat King Cake, and watch videos from past Mardi Gras celebrations.

“Memories of our kids at their first Mardi Gras will never fade,” recalled Staci. “Four year old Abby said, ‘Mom, I like the holidays in this order: Mardi Gras, Christmas, and Halloween!’ I was one proud Mama!”

The Hulsey family proudly displays their purple, yellow, and green decorations in their front yard. 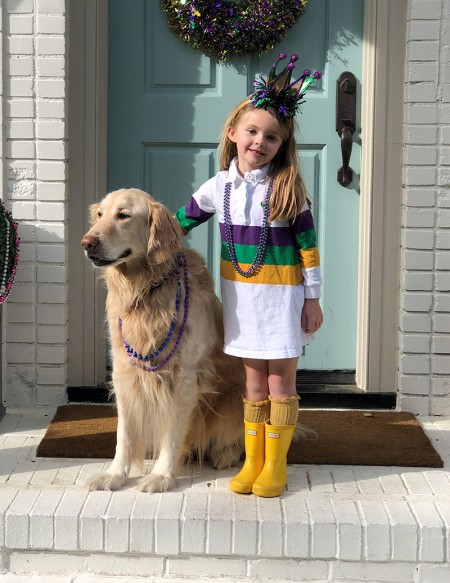 Pictured here is furry-pawed Sam and yellow-booted Anna Katherine Hulsey modeling their beads and getting in the Mardi Gras spirit.

“For Mardi Gras, we stay with good friends in New Orleans whose house is on the parade route. The daytime parades are very kid-friendly, so the kids can easily catch beads from the passing floats,” said Ashley Hulsey.

A few years ago, Kevin Hulsey was invited to ride on a Bacchus float and join the Krewe. The Hulsey family has been celebrating Mardi Gras ever since.

“Kevin will miss riding with Bacchus Krewe this year,” said Ashley. “But he’s excited to celebrate with the Krewe of Hulsey instead and eat lots of King Cake.”

Emily Webster may call Houston home, but during Mardi Gras each year, you’ll find her in the 504.

“The Krewe of Iris is an all female Krewe that began over 100 years ago!” said Emily. “There are 68 riders on the float that include NOLA and Texas friends of mine.” 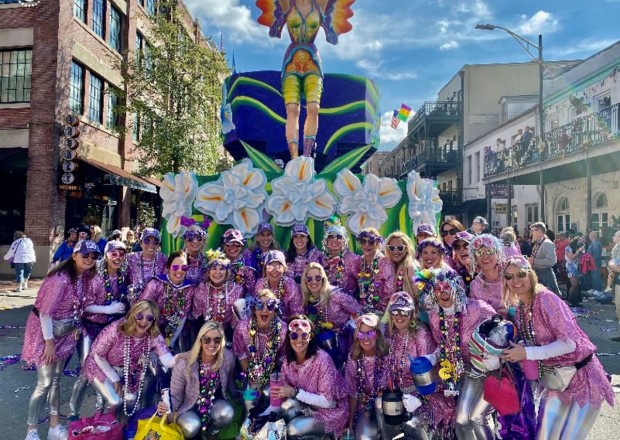 Emily Webster and the Iris riders kept the celebration going after their 2020 parade.

Even though the ladies won’t be in New Orleans this year, they are keeping their traditions of Friday Float Lunch. The group looks forward to a Covid-friendly lunch in Houston.

“It’s a great way to fill the void of Mardi Gras this year. Until 2022, Laissez les Bons Ton Roule!” Emily exclaimed, like the good New Orleanian she is. 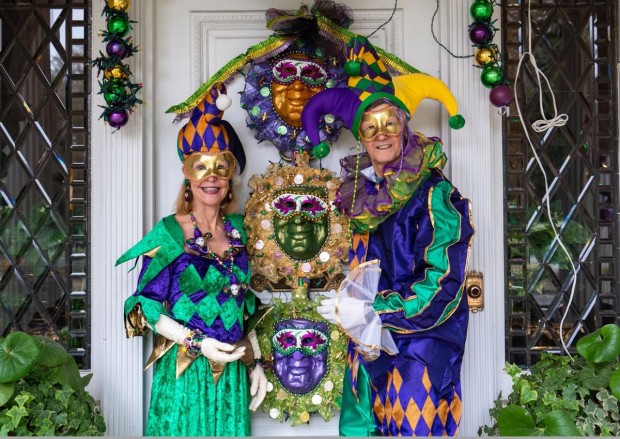 Darryl and Louellen Berger clown around in royal jester costumes like the Mardi Gras Jesters adorning their House Float on St. Charles Avenue.

Many details of beads and costumes for the Krewe of Iris are handled by Emily and her friend Louellen Berger.

Like many Houstonians, Louellen and her husband Darryl recently transformed their home on St. Charles Avenue into a house float with giant props from Kern Studios. 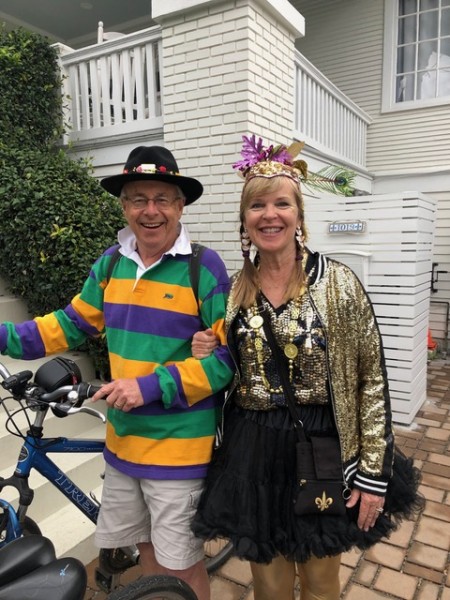 Greg Browne and his wife, Harriet Riley, dress up in their Mardi Gras play clothes and are ready to have some fun.

A former Memorial neighbor, Harriet Riley, also friends with the Bergers, is a fan of House Floats. Harriet and her husband, Greg Browne, moved to New Orleans a few years ago.

“We live on Webster Street, so our block goes by Club Web,” said Harriet. “Everyone is decorating houses and plans to throw beads from our porches. Staying at home to be safe, but we are still celebrating.”

Born on Mardi Gras Day in New Orleans, Ember Mandell was destined to be a parade enthusiast. Ember and her husband David have been taking their daughters, Noelle, Lyric, and Sonnet to the parade since they were little.

“We encourage everyone to remember there’s always a way to celebrate life and share happiness, even in the middle of crisis,” Ember shared. “In NOLA, it’s called ‘joy de vivre.’ An infinite joy, a philosophy of life, that jubilation from within can carry us through.” 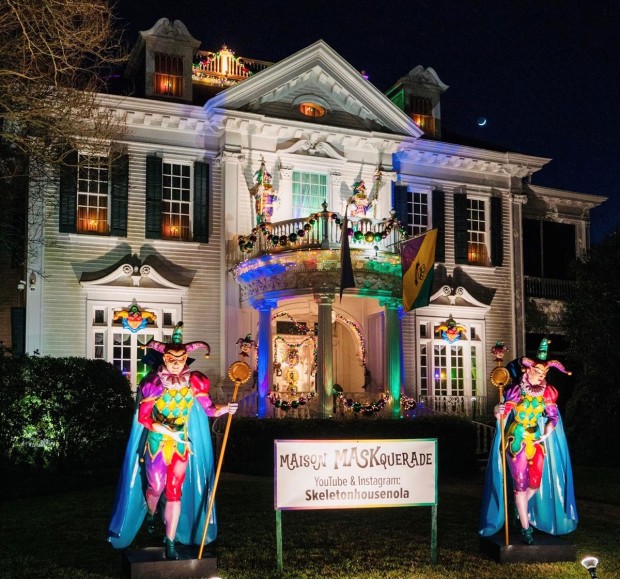 The Berger House is all lit up to celebrate Mardi Gras.

The Mandell family drove to New Orleans to get float props made by artist Rene Pierre of Cresent City Artists. They are participating in Yardi Gras this year by decking out their front lawn.