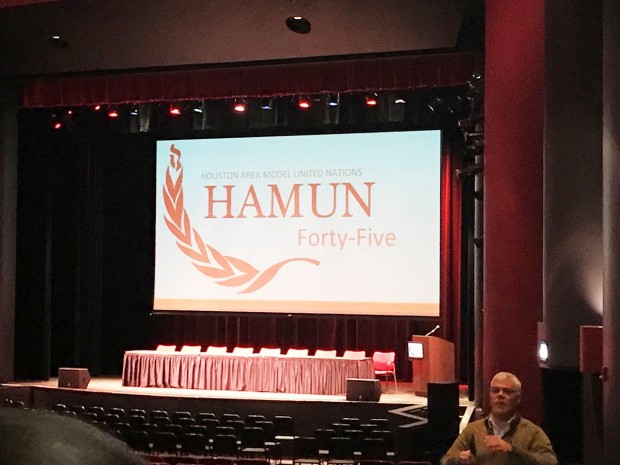 Last year, the Model U.N. Conference was hosted at the University of Houston. Due to Covid, the conference went virtual in 2021.

St. John’s Model UN delegates logged on to the conference Zoom call at 9 A.M. only to find that technical difficulties had delayed the Opening Ceremony until further notice. Despite the rocky start, the delegates remained flexible and continued to make the best of what was surely the most unconventional conference to date.

On Jan. 21 and 22, over 50 Upper School students attended the Houston Area Model United Nations (HAMUN) conference. Because the real United Nations General Assembly convened virtually for the first time in its 75-year history on Sept. 15 in response to COVID-19, it was only fitting that the HAMUN conference became virtual as well.

HAMUN consists of 15 standard committees, such as the Economic and Social Council (ECOSOC) and the Social, Humanitarian, and Cultural Committee (SOCHUM). Each student delegate represents a specific country within one of the committees.

Junior Ella Chen represented the United Republic of Tanzania in the Special Political and Decolonization Committee (SPECPOL), and junior Thalie Waters represented Zambia in the same committee. Before the conference, both students researched the two topics assigned to their committee: issues of global surveillance and telecommunications and the displacement of refugees in Syria and Iraq.

“I especially loved one of the topics of my committee: 'issues of global surveillance and telecommunications,'” Chen said. “During the conference, we discussed how they were simultaneously used for good things, like tracking COVID or other diseases in order to prevent it, and worse things like mass surveillance by extremist countries.”

Although the delegates enjoyed debating and discussing global issues, they couldn’t help but compare their experience to that of last year, when the conference was held on the University of Houston campus.

“My favorite part of Model UN last year was just going out as a whole. I convinced my friends to sign up, so it was really fun to do the conference together and go out during the breaks,” Chen said.

While the virtual conference presented challenges to the social aspect of Model UN, it also posed some difficulties to delegates’ participation in their committees.

“It was a lot harder to connect with people and get your point across because you had to communicate in ‘breakout rooms,’” Waters said. “I get shy when I’m on Zoom, but if we were all in a big group in-person, it would have been a lot easier.”

Despite the difficulty, both delegates look forward to participating in Model UN in their senior year and learning even more about foreign policies and diplomacy.

“It was a really fun way to meet new people and learn about the issues of the world through a different lens,” Waters said. “You gain more of a global perspective rather than just an American point of view on American issues.”