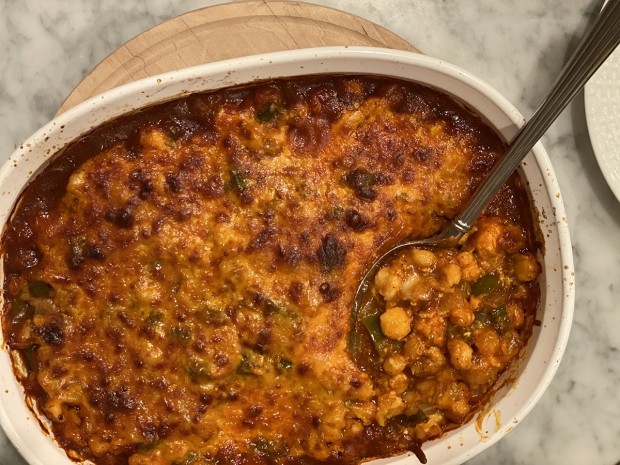 Cheesy hominy is both nostalgic and craveable for dinner tonight.

Last week, my Aunt Marilyn Schwartz died. She was 89. She and my Uncle Babe (who died in 2018) were not only a force in Galveston and in Texas politics, they were also always-there fixtures in my world growing up. Every holiday, every important event, many vacations – they were there.

And they were there most Sunday nights, when our family, then a group of 15 plus an ever-evolving rotation of friends, would get together for dinner. We would either gather at our house, with my parents and sister, or at theirs, with their four sons, the youngest of whom is 10 years older than I. I thought those boys were the ultimate.

Sundays were brisket or fried chicken; Aunt Marilyn is the reason I learned to love fried chicken livers. But what I couldn’t wait to get to was her hominy. It’s a casserole, made with cans, and cheese, of course. But it is special. Like an enchilada, but better. I have proof.

When I was in graduate school in Austin, my Aunt Marilyn took me to the Fresh Plus on West Lynn, where she bought me all the ingredients I would need to make her hominy. And then she taught me how to make it. Being 22, Aunt Marilyn’s hominy was one of the only things I actually knew how to make. But it became my three roommates’ favorite, most-requested dinner, and they didn’t even grow up eating it every Sunday.

How I would love to go back to just one of those Sunday family dinners now. Admittedly, my attention wouldn’t be so focused on the hominy.

Preheat the oven to 350 degrees and spray a 9-by-13-inch baking dish (or equivalent) with nonstick cooking spray. Heat the oil over medium heat in a large skillet. Add the onion and bell pepper, and cook until they are soft and translucent. Stir in the hominy and then the enchilada sauce. Simmer for 10 minutes.

Pour the hominy mixture into the baking dish. Top with the cheddar cheese. Bake for 25 minutes. Turn on the broiler and cook for another 4 minutes or so, until the cheese bubbles and browns. Let the hominy rest for 10 minutes before serving.