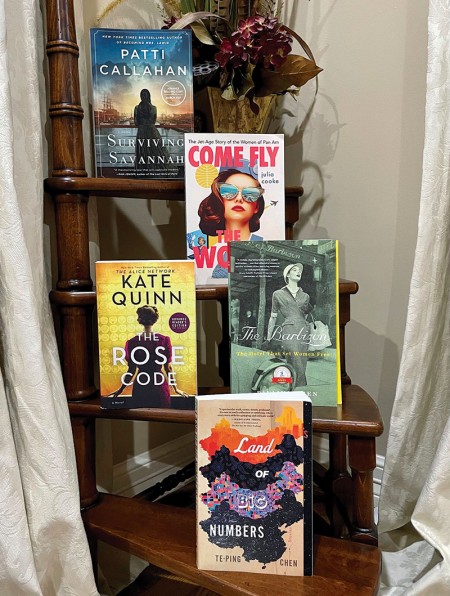 WHAT TO READ This month's picks include two nonfiction books about Pan Am and the Barbizon, two historical fiction stories, one about Bletchley Park and the other about the Titanic of the South, and a short story compilation set in China.

The Barbizon: The Hotel That Set Women Free by Paulina Bren – After World War I, women flocked to New York City to follow their dreams, and they sought safe, female-only places to live. While residential hotels for men existed, no such thing was available for women at the time. The Barbizon Hotel for Women was built to fill this void, housing such well-knowns as Grace Kelly, Liza Minnelli, Ali McGraw, Sylvia Plath, Joan Didion, Phylicia Rashad, and more, and was so successful that it remains the most famous of the women-only residences erected in the first half of the 20th century. In The Barbizon, Paulina Bren captures not only the story of the legendary hotel but also important moments in women’s history from that time period.

Come Fly the World: The Jet-Age Story of the Women of Pan Am by Julia Cooke – Julia Cooke chronicles the women who worked as stewardesses (she uses this term since that was in use then) for Pan Am Airways and their contributions to the Vietnam War effort and women’s rights. Come Fly the World will reframe the way people view stewardesses from this era of transcontinental flight and show instead how progressive many of these women were and how they paved the way for future generations of women to easily negotiate traveling around the world. Cooke interviewed scores of women who served as stewardesses for Pan Am and chose to tell several of their stories in-depth. She relays their stories while also weaving in historical details, such as the way in which the role of flight attendant changed over the years and the women’s help in staffing American soldiers’ R&R trips between Saigon and Hong Kong. It is a truly awe-inspiring and captivating read.

Land of Big Numbers by Te-Ping Chen – Land of Big Numbers is a collection of short stories set in modern-day China, depicting its history, politics, culture, and people. The stories combine sharp commentary on life in a country governed by a Communist regime with elements of satirical magical realism, and the effect is almost always superb. Two of my favorite stories in the collection are “Gubeikou Spirit,” which follows a group of citizens who end up stranded for months on a subway platform, kept there by the station’s guards, and “Flying Machine,” which tells the story of an elderly man who, against all odds, keeps trying to build an airplane out of items he accumulates. Te-Ping’s inspiration for the stories comes from her years spent as a Wall Street Journal correspondent living in Beijing, and these thought-provoking stories have stayed with me. I frequently find myself reflecting on them as I go about my day.

The Rose Code by Kate Quinn – The Rose Code opens in 1947 just days prior to the British royal wedding, when Osla, a codebreaker who worked at Bletchley Park during the war, receives a coded letter that makes her question certain things about her time at the code-breaking facility. Alternating between 1947 and an earlier timeline that begins in 1940, The Rose Code tells the story of three very different women who work as codebreakers at Bletchley during the war and who then must later ferret out the traitor who once operated among them. Many of the chapters open with a quote from the hilarious (and fictional) “Bletchley Bletherings,” the weekly newspaper that recounts the current gossip, an addition to the book that ties the story together and provides some fabulous foreshadowing. Full of fascinating details about Bletchley Park and the many unique individuals who worked there during World War 2, The Rose Code is a must-read.

Surviving Savannah by Patti Callahan – The steamship Pulaski (the “Titanic of the South”) sank in 1838 following a boiler explosion, and 180 years later the ship’s ruins have just been discovered. Everly Winthrop, a Savannah history professor, is asked to help curate a new museum exhibit containing the artifacts recovered from the old ship, and she is thrilled to participate as well as curious to learn more about the night the ship went down. Alternating between the past and present, Callahan brings the story of the real-life sinking of the Pulaski to life in this novel while exploring the various ways humans respond when confronting tragedy.