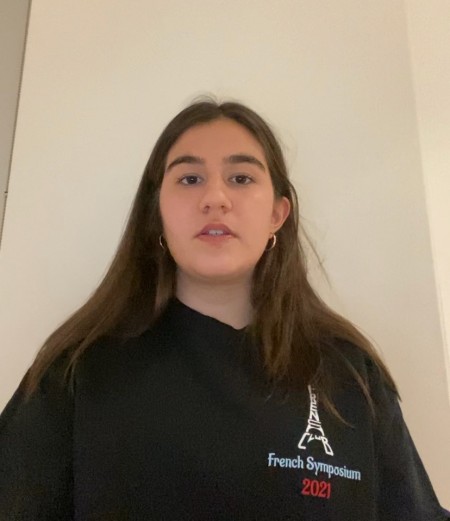 On the evening of March 1, Junior Gaby Jammar rehearsed and recorded the Victor Hugo poem, “Le Soleil Couchant,” countless times before perfecting it for the French Symposium.

Each year, St. John’s students participate in the Texas French Symposium, a competition that invites 40 Texas schools to share their appreciation for French language and culture. Starting in January, students prepare pieces, such as poetry, music, art, and comic strips, to compete in one or more of 29 categories offered by the symposium.

Each category is evaluated by volunteer judges with its own unique criteria, and the highest-scoring participants from each category win awards such as trophies and scholarships for outstanding work. In addition to various individual awards, the St. John’s team won second place overall at the symposium in 2018 and first place overall in 2019. While French students typically travel together to another city and stay overnight at a hotel, this year they were able to participate in the competition from the comfort of their homes.

To accommodate the coronavirus, the French Symposium has moved entirely online, with students submitting videos or pictures of their entries as opposed to physically attending the conference.

French students readily adapted to this change by conducting all of their meetings through Zoom and assigning pieces to participants to avoid potential contact from students and teachers meeting and selecting their pieces together.

In last year’s French Symposium, Jammar planned to participate in both the prose and dramatic interpretation categories, rehearsing the latter with a group of other French students.

“Unfortunately, we didn’t have much time to practice together before everything was cancelled because of the coronavirus,” Jammar said.

This year, Jammar began practicing her prose piece, “Le Soleil Couchant,” in January, in order to perfect her pronunciation and diction for her recording.

“I felt less nervous making a video because you can retake it a lot of times,” Jammar said. “It’s not like you have to get it right the first time.”

Although she enjoyed recording her piece, Jammar missed other elements of French Symposium, like meeting French students from other schools and getting to know her own classmates better.

“Everyone used to hang out a lot waiting in between performance pieces or after their performances, which obviously couldn't happen this year,” Jammar said.

Jammar hopes that the French Symposium will reconvene in-person in 2022 for her senior year.

“I’d love to go out to eat with my classmates again like we did in Freshman year,” Jammar said. “That was one of my favorite parts of French Symposium.”

Until then, Jammar awaits the announcement of the French Symposium finalists for each category on April 5 and the winners on May 3 2021.