Life in an Airstream 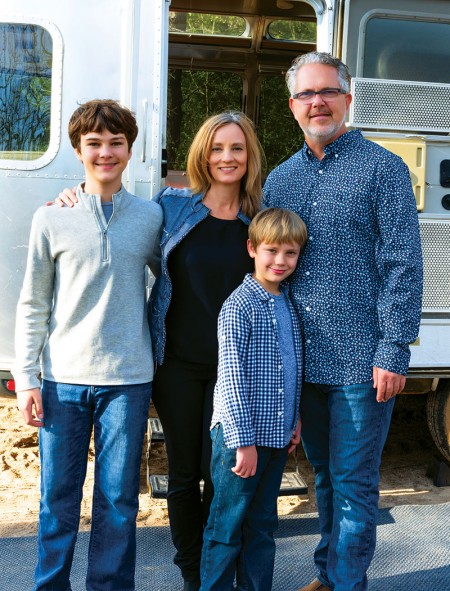 ROAD WARRIORS The Hruska family has taken their work and study across the country in their Airstream. From left: Tad, Rame, Zak, and Rusty. (Photo: Rame Hruska)

An ill wind blew into Memorial and the lives of the Hruska family in August 2018. That’s when Rame was diagnosed with breast cancer. Rame, an architect, businesswoman, mother of 12-year-old Tad and 8-year-old Zak, and wife of Russell – known as Rusty by his friends – was determined not to let it beat her.

Towards the end of her 15 months of aggressive treatment, she told Rusty, “If I beat this thing, let’s buy an Airstream and spend time together as a family.”

Sure enough, that’s what has happened, and now the family is pushing the boundaries of what’s possible, both in terms of travel and work-life balance, and the ill winds of illness have pushed them toward a life of their dreams.

As soon as Rame (pronounced Ramey) started feeling herself again, she started hunting the web, and she found it: a 28-foot, 2008 Airstream – a fixer-upper on the inside, but in excellent condition on the outside.

“We looked at it and said, ‘We’re architects; we’ve got all the resources. We can take this and put it back together and end up with a great solution,’” said Rusty. “And that’s exactly what we did.” 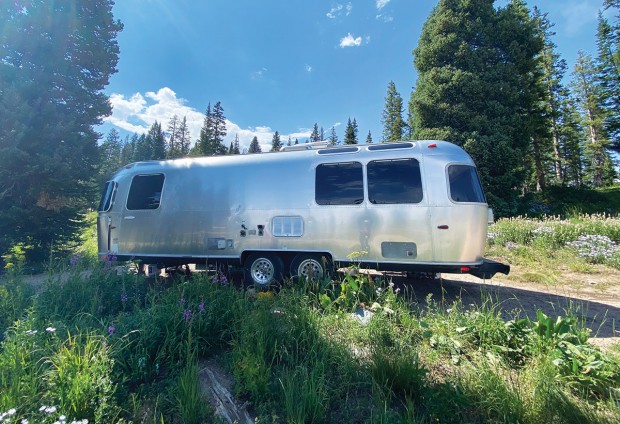 They hauled it home with their Ford pickup and spent the next month remodeling it. They replaced the flooring and changed the layout, removing the recliner in the front, installing a table that folds down into a bed, with a banquette-type bench and custom cushions.

The Airstream became their vehicle to a more flexible approach to life. “That led us to: ‘We don’t really need an office right now’ – then the pandemic came, and it just lent itself to how we’re living our lives these days,” said Rusty. Virtual classes for the kids set the family free to spend even more time on the road.

The couple’s luxury-prefab company, Boxprefab, requires them to travel for work. With the Airstream, some of these jobs have turned into family adventures.

“For me it was about redefining that work-life balance and coming up with a way that we can manage work and play,” Rame said. Over time they’ve been able to work out a routine; mornings are work and study time, and by late afternoon they’re able to put the pencils down and do something together. “It’s given us time to connect with each other, to connect with nature, making time to be in the moment of each activity – whether we are focused on work or doing an activity like biking.” 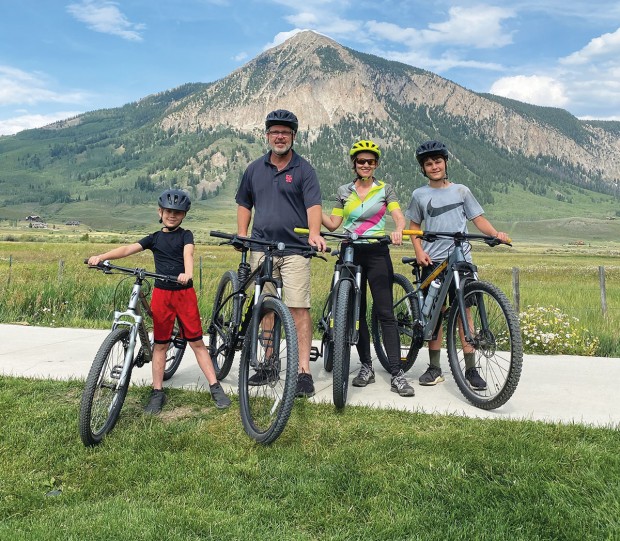 Biking down the mountain to Crested Butte from the ski resort. (Photo: Rame Hruska)

The Airstream turned out to be the perfect pandemic vehicle, for many reasons; it makes it easy to isolate as a family, for one. “We basically take our environment with us,” said Rame. “You don’t have to stop at restaurants along the way. We cook our own meals – it’s much more connecting, and cooking food while camping is also part of the experience.”

Their preferred destinations include state and national parks, although with the pandemic, it’s been challenging, as the sites are usually booked many months in advance. Fortunately, they’ve been able to find private campgrounds and RV parks, allowing them to make day trips into the state and national parks. Trips have ranged from three-day weekends during the school year to vacation jaunts of two to three weeks – and the Airstream streamlines the experience into one that accommodates a comfortable work and study environment.

Their first road trip with the Airstream was a “Destination Unknown” theme trip to Universal Studios in Orlando, Florida, during the summer of 2019. Rame gave the kids a series of hints about where the next stop would be: New Orleans, the National World War II Museum; Louisiana’s Atchafalaya Basin, one of the world’s longest bridges. Along the way they listened to podcasts that told the stories of the places they were passing through. “Having some of these podcasts was a way to connect and learn about where we were going,” Rame said. 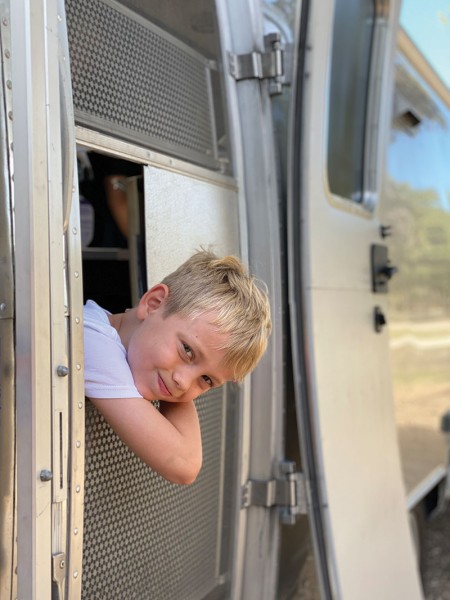 Later that summer they went back up to Colorado, where it was rafting, horseback riding, camping, and fishing – one day they caught 14 fish in an hour and a half.  “It was an awesome, awesome experience as a family,” Rusty declared.

It was a trip they would repeat in 2020, stopping and checking out intriguing sites along the way on both trips. One of their favorites: the amazing Palo Duro Canyon in the Texas Panhandle. “Most people don’t have a clue there’s this amazing, beautiful canyon there,” said Rusty. They took in the breathtaking views and the classic outdoor musical production, Texas. Other notable attractions along the way included Amarillo’s famous Cadillac Ranch – an art installation involving a row of 10 vintage Cadillacs partially buried, nose-first, in the ground.

Great Sand Dunes National Park was another favorite stop – and long overdue, as Rusty had always seen them at a distance as a child when his family made their yearly trips to Colorado, but his father was always set on driving straight through. They rented surfboards to surf down the dunes, and they learned about the history and ecology of the dunes.

“That’s the great thing about being in the Airstream,” said Rusty. “We’re able to stop and do things that maybe we didn’t do before, check out things, basically stop and smell the roses along the way.”

There have been plenty of lessons, as well. Like the time when, despite their best efforts, the good-sized town they chose for an important conference call ended up having a three-bar signal.  “We had internet,” he said, “but we learned the negative side of that, having it be a very poor signal — because you have the expectation you should have it and when it doesn’t work, it causes an extra level of stress.” 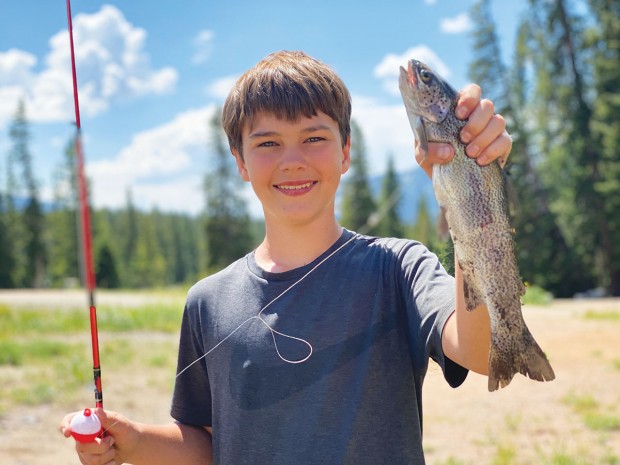 Another challenge at first was not running out of gas. The truck has a feature that calculates mileage and tells you where you should get gas – but that device doesn’t know they are hauling a mini-house behind them. Now they’ve learned to take that into account.

For Tad, one of the most important lessons has been about planning and getting to know your gear. Food has to be packed, and the vehicle must be taken care of. The boys’ eyes grew wide as they recalled the time they almost ran out of gas and got stranded in the desert.

“Traveling in an Airstream is a lot easier than camping or finding hotels everywhere,” said Tad. “But you can’t just show up [at the RV park], and everything’s ready.” Especially when they were first getting started, it was challenging, pulling into a campground at night and rummaging around with flashlights trying to hook up electric and water. Now they know the ropes and they have systems in place, and it comes together pretty seamlessly.

Thanksgiving week of 2020 was a project in the Austin area. After the work was done, they headed for Garner State Park, where they enjoyed the best of the Hill Country, swimming in the cold, clear waters of the Frio River.

“It was great,” said Rusty. “The kids went off on their own, having a great time in nature; they jumped in the river, built things, cooked, hung out together, played games.” 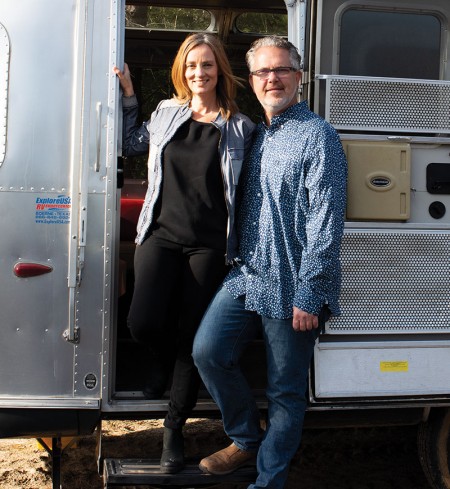 ROAD WARRIORS Rame and Rusty Hruska (from left) have taken their work – and their kids – across the country in their Airstream. (Photo: Rame Hruska)

The family is looking forward to continuing their travels in the years ahead, even when the pandemic is brought to curb and the kids go back to school. Next up: A Spring Break trip to go check out an opportunity in Marfa. “We ended up structuring the whole trip around going to the Davis Mountains, Marfa, and Big Bend, creating a whole family trip,” said Rusty.

As that plan developed, another job opportunity came up in Joshua Tree, Calif.; being all the way across Texas, they would already be two-thirds of the way there, they reasoned, so they’ve tagged on another week and will soon be heading for Joshua Tree.

For this summer, they’re scoping out California, Wyoming, and Oregon, with a stop in Yellowstone National Park along the way and a visit with Rame’s parents at their home in Silver Lake, Oregon.

Galveston, with its proximity and its good wifi signal, has been a favorite destination for quick getaways. “Sitting out on the picnic table having kids do schoolwork with a sea breeze is not a bad backdrop,” said Rusty.

“When we’re here at home, we’ve got lots of stuff going on and you have a tendency to get sucked into the things you need to do, and the kids are on their devices,” said Rame. “I really wanted a way to disconnect from that and spend time together as a family.

“So it was about disconnecting. And now the interesting twist is that, with the ability to connect, it’s let us do both of those in a way that also supports and embraces our family life.”