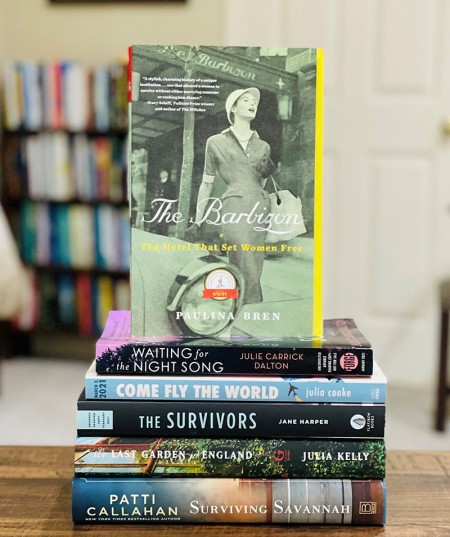 Last year I began creating my best books of the year list from the beginning of the year forward. A year is a long time, and 2020 felt like ten years. I wanted to make sure that I did not forget any gems from the early part of the year. That strategy worked very well for me so I am doing it again this year.

As 2020 progressed, I continually updated the list as I read books that I loved; as the year unfolded, some books stayed on and others rolled off as new ones were added. For a variety of reasons including the pandemic and the election, there have been tons upon tons of books published in the first part of 2021. The sheer volume of books coming out is incredible, and I am doing my best to read as many as possible.

I love reflecting on the books that stand out to me and what I am reading. So far this year, I have identified two trends. First, historical fiction and narrative nonfiction books are topping my list at the moment. And second, I have interviewed 7 of the 8 authors for the books on my list for my podcast. While I get pitched authors regularly, these were all interviews that I requested. I am very curious to see how that trend develops as the year continues.

Here are my top eight reads for the first three months of 2021:

The Barbizon: The Hotel That Set Women Free by Paulina Bren – After World War I, women flocked to New York City to follow their dreams and sought safe, female-only places to live. While residential hotels for men existed, no such thing was available for women at the time. The Barbizon Hotel for Women was built to fill this void, housing such well-knowns as Grace Kelly, Liza Minnelli, Ali McGraw, Sylvia Plath, Joan Didion, Phylicia Rashad and many more. The hotel was so successful that it remains the most famous of the women-only residences erected in the first half of the 20th century. In The Barbizon, Paulina Bren captures not only the story of the legendary hotel but also important moments in women’s history from that time period.

Come Fly the World: The Jet-Age Story of the Women of Pan Am by Julia Cooke – Julia Cooke chronicles the women who worked as stewardesses (she uses this term since that was in use then) for Pan Am Airlines and their contributions to the Vietnam War effort and women’s rights. Come Fly the World will reframe the way people view stewardesses from this era of transcontinental flight and show instead how progressive and forward-thinking many of these women were and how they paved the world for future generations of women to easily negotiate traveling around the world. Cooke interviewed scores of women who served as stewardesses for Pan Am and chose to tell several of their stories in-depth. She relays their stories while also weaving in historical details such as the way in which the role of flight attendant changed over the years and the women’s help in staffing American soldiers’ R & R trips between Saigon and Hong Kong. It is a truly awe-inspiring and captivating read.

The Last Garden in England by Julia Kelly – Centered around the fictional Highbury House gardens, Julia Kelly takes the reader on a fascinating journey through these elaborate gardens across the span of over a century. Set in a triple timeline format, 1907, 1944, and 2021, The Last Garden in England follows five women whose lives are interwoven with the house and particularly the gardens. Kelly brings the gardens to life, and I often felt that I was right there with the characters among the plants and flowers due to her creative and beautiful descriptions. She uses just the right amount of detail, and it is easily apparent how much research Kelly conducted. I thoroughly enjoyed this one.

The Rose Code by Kate Quinn – The Rose Code opens in 1947 just days prior to the British royal wedding when Osla, a codebreaker who worked at Bletchley Park during the war, receives a coded letter that makes her question certain things about her time at the code-breaking facility. Alternating between 1947 and an earlier timeline which begins in 1940, The Rose Code tells the story of three very different women who work as codebreakers at Bletchley during the war and who then must later ferret out the traitor who once operated among them. Many of the chapters open with a quote from the hilarious (and fictional) “Bletchley Bletherings”, the weekly newspaper that recounts the current gossip; an addition to the book that ties the story together well and provides some fabulous foreshadowing. Chock full of fascinating details about Bletchley Park and the many unique individuals who worked there during World War 2, The Rose Code is a must read.

Surviving Savannah by Patti Callahan - The steamship Pulaski (the “Titanic of the South”) sank in 1838 following a boiler explosion, and 180 years later the ship’s ruins have just been discovered. Everly Winthrop, Savannah history professor, is asked to help curate a new museum exhibit containing the artifacts recovered from the old ship, and she is thrilled to participate as well as curious to learn more about the night the ship went down. Alternating between the past and present, Callahan brings the story of the real-life sinking of the Pulaski to life while exploring the various ways humans respond when confronting tragedy.

The Survivors by Jane Harper - Jane Harper returns with another stunning and well-paced Australian mystery. This time, she chose Southern-most Tasmania as her setting. After a long absence, protagonist Kieran Elliott returns home to Evelyn Bay for a visit to help care for his ailing father. When he was twelve, an accident led to the death of Kieran’s brother Finn and his friend, and the town blamed Kieran for the tragedy. His arrival is met with disdain and when a murder occurs, Kiernan is dragged back into the tragic events of the past. Part character study, part mystery, The Survivors showcases Harper’s stellar writing style, and her vivid imagery helps to immerse the reader in the atmospheric and gloomy setting.

Waiting for the Night Song by Julie Carrick Dalton  -  Dalton’s poignant and beautiful debut captivated me from the start. Alternating between the past and the present, Waiting for the Night Song follows Cadie Kessler, an entomologist and forestry researcher focused on studying the pine bark beetle in New Hampshire. Her goal is to prove that the beetle is present in the state and destroying pines similar to the devastation it wrought in California and Colorado. As the book opens, Cadie is drawn home to help a childhood friend confront the long-held secret that the duo covered up several decades ago. Dalton creates a magnificent sense of place bringing the New Hampshire forest to life while tackling tough and highly relevant issues such as the pine bark beetle, climate change and racism. Waiting for the Night Song is a fabulous addition to the growing genre of climate-focused fiction.