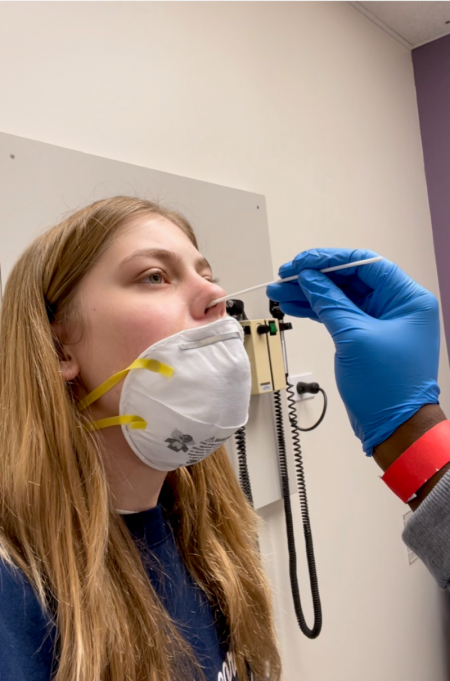 Isabelle King, Kinkaid ’24, gets tested for COVID-19 before her second dose of the vaccine.

Two Houston teens, twins Isabelle and Alexandra King, Kinkaid ‘24, had to miss their biology test to be a part of a possibly history-making, real-life science experiment, where they were the experimental group. They took part in a clinical trial of Moderna’s COVID-19 vaccine aimed at gauging the effectiveness of the vaccine in kids age 12 through 17.

As of the writing of this article, Moderna's vaccine is one of two mRNA vaccines being administered to prevent the spread of COVID-19, with Pfizer-BioNTech's vaccine being the other. Those 18 and over can take the Moderna vaccine, but the company hopes to lower the age bar by six years, as, to keep schools open, vaccinating students will be critical.

The King sisters took part in a 2,000 to 3,000-child vaccine trial that was administered across the United States. Their mother, Elizabeth King, took part in the Pfizer-BioNTech vaccine trials over the summer and helped her daughters apply to the Moderna trial in the winter.

They received both doses at DM Clinical Research, a facility overseeing most vaccine trials in the Greater Houston Area, first on January 5 and a month later on February 5. Post-inoculation, they scheduled monthly check-ups to monitor any symptoms.

The sisters described the experience as “rewarding,” saying that “it always feels good to contribute to the world around you, especially to help solve a problem that has affected everyone.”

After their first vaccination, they described symptoms of arm pain and soreness. After the second dose, they felt “lots of flu-like symptoms like dizziness, fatigue, minor fever, blurry vision, and nausea.” However, overall, the two agree that “the side effects for one night seemed minor compared to feeling those symptoms for two weeks if infected with COVID-19.”

Isabelle and Alexandra received $15 per hour as compensation for the vaccine trials. When asked what they would use the money for, both responded: “We will probably save the money for the future or use it for personal purchases like clothes.”

April Concerts at the Houston Symphony