Where were you one year ago? 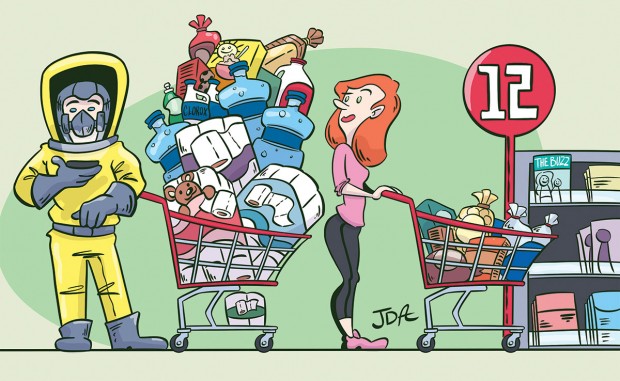 STOCKED UP Last March brought countless interpretations of how best to hole up. (Illustration: behance.net/runamokstudios)

This month marks the anniversary of one of the biggest “where were you when” moments – the start of the pandemic quarantine – on Friday the 13th, no less. We asked neighbors, and, almost to a person, they started by saying, “I remember exactly where I was!”

Linda Elmer: I was at brunch with two old friends with kids at a different high school. Suddenly all of our phones were blowing up. We got notifications within minutes from our schools saying we were closing that day and wouldn’t be opening after Spring Break.

Tracy Kapiloff: We were playing mah jongg at the Briar Club. My friend Julia Burke’s husband is an ENT, and she told us she thought it was going to be longer than two weeks. I remember specifically telling her I’d give them two weeks, and then I was done!

Lana Rigsby: I had laughed about “corona” just days earlier, saying that no respectable flu would be named after a beer. Since then, the dreams I had for my kids’ senior year are dashed, and my heart has broken for them nearly every day. But there have been silver linings: family time playing cards, cooking, walking dogs, and becoming close in a way that I hope lasts forever. We got a puppy early in the lockdown, now Boone is almost fully grown.

Samantha Sullivan: When the rodeo shut down. I knew then it was for real.

Joy Yeager: I began my day by going to Whole Foods, filling my cart as full as it could be filled. I recall being puzzled by all the people hoarding bottled water – a hurricane habit, I suppose. I also had a haircut that day. I think it was six months before I had another.

Deanna Sheaffer: Two perspectives… Along with a dozen other parents, [I] hosted the first grad party of the season for over 250 St. John’s seniors and friends. We … looked down on the crowded room where kids were dancing cheek to cheek and wondered, “What if this is isn’t safe?” Three days later, the rodeo shut down, and by Friday, most schools went online.

My dad had entered the hospital on March 9 for a very difficult spinal cord surgery that he had flown to Houston from Florida to have. The day of his surgery [was] March 24, which was the same day the Houston hospital system instituted their “no visitors” rule. Like many others, my dad spent the next four months post-surgery in the healthcare system alone and died July 8 of respiratory complications.

Barbara Trautner: March 11, MIT cancelled the track team's participation in the NCAA Indoor Track and Field National Championships an hour before our daughter Margaret, a senior at MIT, was due to board the flight to the event in New York. As an infectious diseases doctor, I realized in that moment that everything was going to fold – MIT graduation, St. John’s graduation, all the spring events and rituals planned for my high school and college seniors, gone. I felt her heartbreak, my heartbreak, and the heartbreak that was coming for all of us.

Tevia McLaren: My mom, almost 95, lives in independent living in a retirement community. It was obvious entry was going to be shut down soon. I filled her up with as many personal care items I could think of and any treats I knew she liked (Butterfingers and gummy bears). I sat and chatted with her far into the afternoon. Before I left, I gave her the longest hug. She was actually antsy for me to leave, as her facility was still having activities. She has made it through with flying colors and has received both vaccine shots. I can see her again now in very specific situations. She has definitely gotten better at FaceTime!

Diana Brackman: The moment that I realized how personal Covid would be to me and my family was [realizing I had been] in New York with my daughter and granddaughter the week before the pandemic was announced. We went everywhere, including riding the subway, and touched everything.

Stuart Rosenberg and Jose Ocque: We were stuck in Peru for most of March. Peru was a stopover on our way to Chile. Our quarantine began [when a hotel guest] read a Twitter post from the Peruvian president announcing that the country’s borders would shut down the following day, along with airports. We spent the next several weeks with a global crew of about 60, including another family from the River Oaks area plus one from West U.

Michelle Glickman: We were deep into planning my father-in-law’s 80th birthday, and I was addressing invitations. We ended up canceling the party, thinking we’d reschedule for summer 2020.

Anonymous: I was going into surgery for an appendectomy! I remember thinking holy s**t! This year is going to suck. I was right!