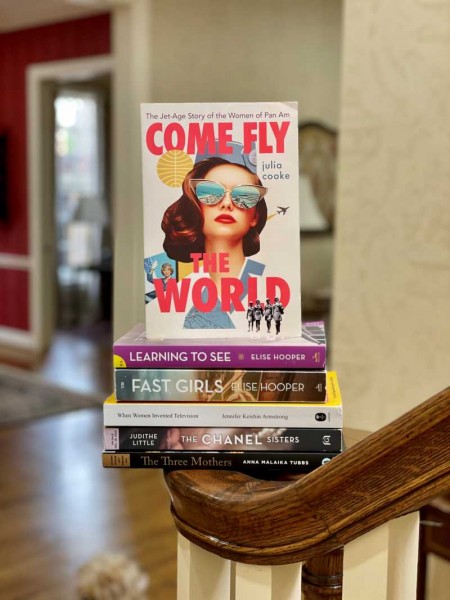 Learn more about these daring and courageous women whose contributions to our world deserve to be celebrated.

March is Women’s History Month in the United States, and the entire month is devoted to celebrating and recognizing the multitude of contributions that women have made to history. This week I selected books recognizing women who left their mark on our world in important ways.

As with any new venture, I have learned so much since I launched my podcast last June – how much I enjoy speaking with authors, how much work the podcast is, and how frequently the female authors that I interview (especially historical fiction and nonfiction) are working to highlight forgotten women’s tales. History is written by the victors and by those with a platform and historically that has not been women. I am amazed and thrilled to see that more and more stories about courageous and pioneering women are making their way out into the world so that their stories will not remain forgotten.

I chose a mixture of historical fiction and nonfiction, and two of the books cover prominent women during less well-known times in their lives and the other books focus on women whose stories are just now being told. I hope you enjoy these six books about women who deserve to be remembered and recognized during Women’s History Month:

Come Fly the World: The Jet-Age Story of the Women of Pan Am by Julia Cooke: Julia Cooke chronicles the women who worked as stewardesses (she uses this term since that was in use then) for Pan Am Airlines and their contributions to the Vietnam War effort and women’s rights. Come Fly the World will reframe the way people view stewardesses from this era of transcontinental flight and show instead how progressive and forward-thinking many of these women were and how they paved the world for future generations of women to easily negotiate traveling around the world. Cooke interviewed scores of women who served as stewardesses for Pan Am and chose to tell several of their stories in-depth. She relays their stories while also weaving in historical details such as the way in which the role of flight attendant changed over the years and the women’s help in staffing American soldiers’ R & R trips between Saigon and Hong Kong. It is a truly awe-inspiring and captivating read.

The Three Mothers: How the Mothers of Martin Luther King, Jr., Malcolm X, and James Baldwin Shaped a Nation by Anna Malaika Tubbs: While much is known about Martin Luther King, Jr., Malcom X, and James Baldwin, most people are unfamiliar with the exceptional women who raised these three great men: Alberta King, Louise Little and Berdis Baldwin. In her seminal debut, Anna Tubbs brings these women’s stories to life and emphasizes their efforts to inspire and protect their children who were born into a society that resented them from day one. This beautiful homage to black motherhood is highly relevant for today’s world.

When Women Invented Television: The Untold Story of the Female Powerhouses Who Pioneered the Way We Watch Today by Jennifer Keishin Armstrong: The arrival of television was ignored by many men in the entertainment industry who felt radio was the better platform. Four women, Irna Phillips, Betty White, Gertrude Berg, and Hazel Scott, individually used this opening to each forge their own path in the television industry and, as a result, significantly impacted the way we still watch the medium today. When television did in fact prevail, these women were pushed to the side as men began to dominate the industry. When Women Invented Television spotlights their forgotten stories.

The Chanel Sisters by Judithe Little: This gorgeously-written book by Houstonian Judithe Little chronicles the lives of Antoinette and Gabrielle “Coco” Chanel from their early years at the convent orphanage in Aubazine, France. Their time at the orphanage left a lasting impression on both girls and forged a determination in Coco to create a better life for herself and to seek entrée into the upper-crust society who refused to accept her. From the days of their hat shop on Rue Cambon in Paris to the years after the war, Little tells the women’s stories through the eyes of Antoinette detailing their friendships, romances, and success in the fashion business. In her Author’s Note, Little includes engaging tidbits about Coco Chanel’s inspiration for her CC symbol which recreated the interlocking loops in Aubazine’s stained glass and for her jewelry which copied the patterns found on the orphanage’s stone floors. Readers will be captivated by this stunning tale.

Fast Girls by Elise Hooper: Fast Girls shines the light on three little-known American female Olympians who doggedly pursue their dreams to compete in the Nazi-sponsored 1936 Berlin Olympics, the first integrated Olympics. These women must each overcome their own personal obstacles and roadblocks in order to have their time on the Olympic track and defy those who think women (and people of color) should not compete. Chock full of historical details and stories about various Olympians and the grand event itself, readers will love the stories of these strong, determined women.

Learning to See: A Novel of Dorothea Lange, the Woman Who Revealed the Real America by Elise Hooper: Dorothea Lange’s photographs from the Great Depression – and from the Japanese American internment camps to a lesser extent – are iconic and part of the fabric of our culture, but the story of her life is less well known. Hooper’s novel tells Lange’s tale including the sacrifices she made to bring about social change for the less fortunate. Learning to See is a fabulous tale from start to finish, and the inclusion of some of Lange’s photographs at the end of the novel is an added bonus.