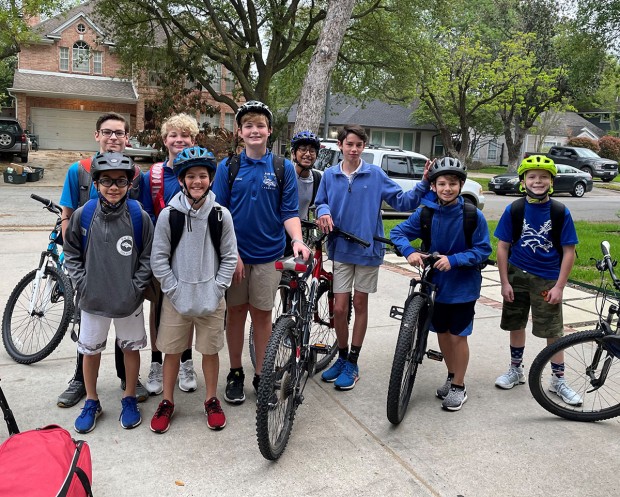 The Bellaire Biker Gang getting ready to hop on their bikes and head to Pin Oak for another exciting day of sixth grade. Pictured (front, from left) Carlito Nossa and Reid Flowers; (back, from left) Lee Beasley, Halen Thestrup, Luke George, Shiraz Alapat, Logan Ayers, Will Dagley, and Charlie Turner. (Photo: Kim Grant)

You may have caught a glimpse of a rowdy-looking biker gang revving their engines while cruising down the streets of Bellaire on weekday mornings and afternoons. Their blue shirts tattooed with fierce, nostrils-flaring horse heads reveal their widely-feared identity. . .  sixth grade boys.

Pin Oak Middle School sixth graders Logan Ayers and Reid Flowers attended classes in person when they were first offered in mid-October. Many of their friends had decided to continue attending school virtually for the time being. That first day, Logan and Reid met at Logan’s house and rode their bikes to school together.

As the weeks went by, more friends decided to attend school in person. Friends spread the word about meeting up in the morning to ride bikes together. 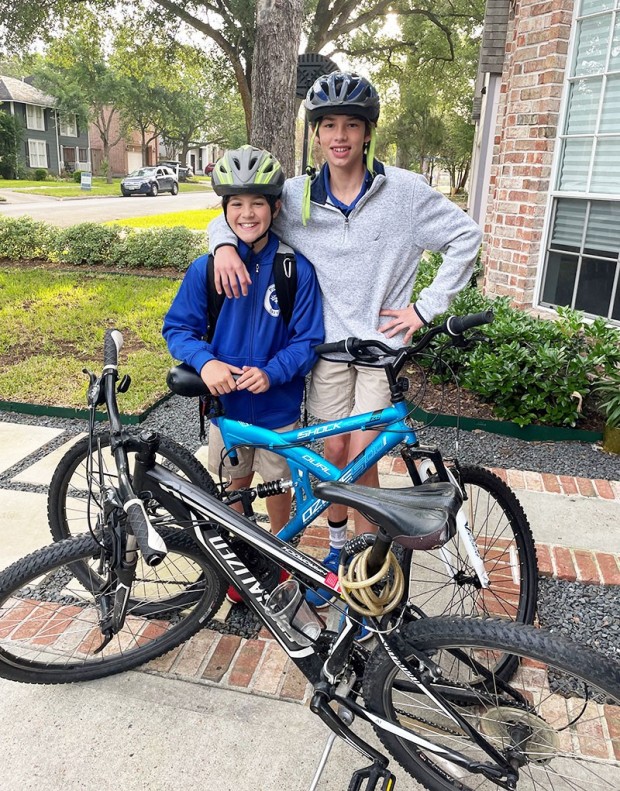 Reid Flowers (on left) and Logan Ayers (on right) are glad that more of their friends have joined their morning ride to school at Pin Oak.

The meet-up location remains Logan’s house, as it’s a convenient place for the group to meet on their way to school.

Around 7:30 a.m., the early-bird bikers start trickling in. The sleepier-eyed crew drag in a little later. The garage door opens to reveal a Teenage Man Cave. Treasures include a ping-pong table, basketballs for the driveway hoop, footballs, lacrosse sticks, and balls to toss around.

There is also a couch for hanging out and debating important 'tween guy stuff such as the best lunch items (pigs in a blanket, cold pizza, peanut butter honey sandwiches and Takis chips are all contenders) and whether guitar or P.E. is the cooler class.

Around 7:50 a.m., the gang members strap on their helmets and overstuffed backpacks, put the pedal to the metal and set out on their 1.5 mile trek to Pin Oak.

Riding in a single-file line, the bikers stretch almost half a block down the sidewalk. They make sure no one gets left behind and head count to check that everyone has caught up before they cross under the traffic lights of busy intersections when their walk signal appears.

During their ride, the group tells jokes and speaks in their native 12-year-old boy language that only they understand. They relish in the rare exhilarating moments of not being monitored by adult ears.

Like clockwork, they roll onto campus before the morning bell rings at 8:30 a.m. They are sure to always be on time. They don’t want to mess up a good thing. 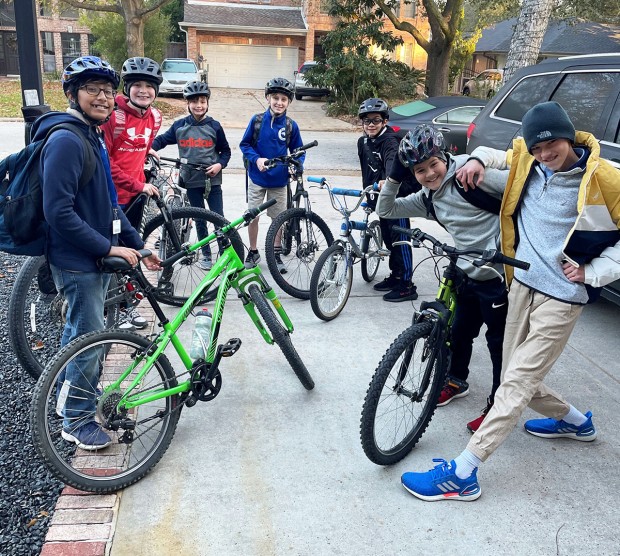 Members of the Bellaire Biker Crew revealed reasons they like being part of the gang:

Halen Thestrup: “I like that we all get to hang out and shoot hoops or play ping pong.”

Reid Flowers: “It’s a fun way to get to school and I look forward to riding with my friends after a long day.”

Will Dagley: “I like just messing around with friends and they helped show me where to go for classes since I had stayed virtual until February.”

Luke George: “I like talking to friends and having freedom while we ride to school.”

Lee Beasley: “I have enjoyed becoming friends with the boys I only just kind of knew before.”

Logan Ayers: “It helps me not be nervous to go to school and it’s helped me meet a whole bunch of new friends.”

Carlito Nossa: “It motivated me to wake up earlier and I like when we occasionally stop at Shipley’s for donuts.”

The gang also revealed that every once in a while (with their parents’ permission) they might stop at the corner gas station for a little candy. Which is probably not a bad idea because tough bikers like these can always use a little sweetening up. Especially ones that just survived a day in the life of being a sixth grader. Which is actually a pretty good gig when you have biker friends like these. 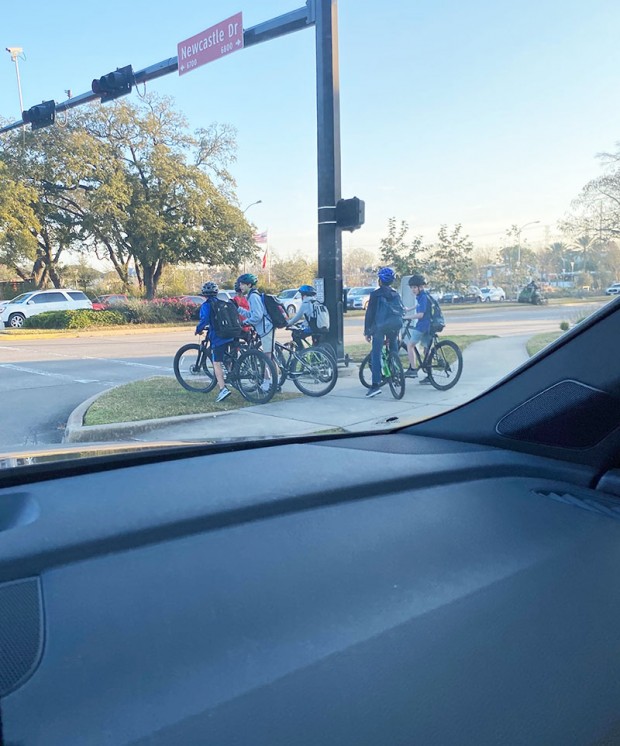 The Bellaire Biker crew on their morning trek to Pin Oak Middle School. 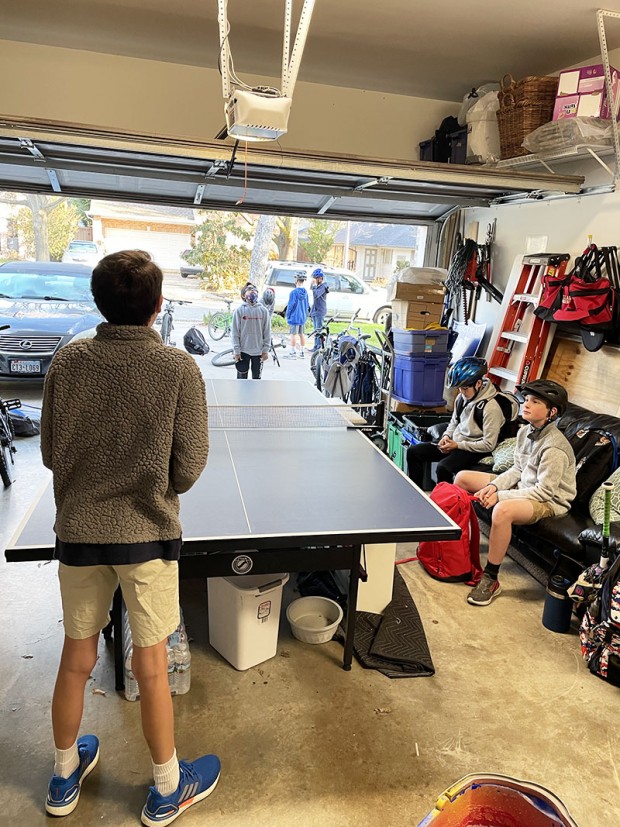 Nothing like ping pong in the morning to wake you up. Pictured: Logan Ayers (in front), Carlito Nossa (looking up), Reid Flowers (on couch, left), and Halen Thestrup (on couch, right).

Peace within: what lies beneath the turbulence of our minds