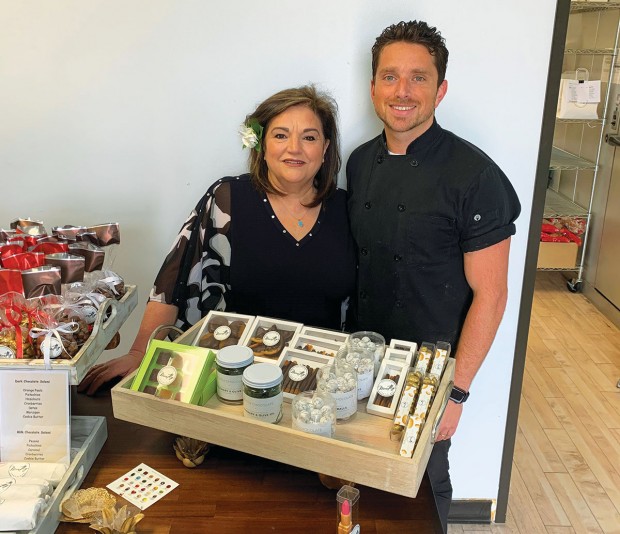 Sometimes, moms do know best. Rina Kamkhagi runs Mostly Chocolate & Catering with her son, Dany Kamkhagi. Rina helped me understand the nuances that set apart excellent chocolates from merely good ones. Few would argue that chocolate is one of the most pleasurable foods on the planet. But it's also complicated.

"When you bite into a chocolate bonbon, the shell, from top to bottom, has to have a nice snap, almost like an eggshell, thin, not thick and clumsy," Rina said. "Inside, the ganache filling has to be smooth, and you taste whatever flavors are in it in steps. Take Dany's spicy chocolate. First, you taste the chocolate, then the vanilla, then just a hint of cayenne pepper."

It's a challenge finding fine-quality chocolates like ones I've sampled in New York and Los Angeles. I've had no luck in Houston until last month, just in time for Mother's Day. A customer with spiky blond hair breezed into Mostly Chocolate, located in a nondescript business center just off Katy Freeway. Former radio host Dayna Steele grabbed a shopping bag. Inside were ornate candies and hand-crafted chocolates for family and friends.

"They're a work of art," Dayna said. "When you first open the box of chocolates, you don't want to eat them. Then, you eat the first one, and it doesn't matter. You want another and another."

Blue-eyed and with tousled chestnut hair, Dany recalled when he and his mom would get so excited with a 100-piece order of their hand-painted molded chocolates, which sell for $2.50 apiece. That was before 2013 when Mostly Chocolate moved into its current location. Since the mid-2000s, Mostly Chocolate had operated out of his parents’ home in Tanglewood, where Rina, an empty nester, started making candies to keep from phoning her college-bound sons every hour.

Rina had missed the exquisite confections she grew up eating in Beirut, Lebanon, where "each one was wrapped in gorgeous paper." So, she started making hard-to-find Lebanese treats, such as pistachio marzipan sandwiched between walnuts and then dipped in chocolate.

Friends ordered these and chocolate-dipped orange slices as gifts for their wedding guests. They also became obsessed with her 4-ounce chocolate chip cookies made with French butter.

Within a few years, her dessert business expanded to high-end catering. Today, Rina manages the catering side while Dany oversees the chocolate shop, which has soared in popularity because of her 33-year-old son's creativity. "He took it to another level," 61-year-old Rina said.

The 100-piece chocolate boxes have become a daily event rather than quarterly. Mostly Chocolate sells about 3,000 pieces of bonbons monthly. During holidays, sales double.

Rina sees a lot of herself in her youngest son, Dany – the creativity and determination especially. So, after Dany graduated from college, she suggested he explored the world of chocolate.

Besides a sandwich shop stint, Dany never contemplated the food business. But urged on by his fiancée and now-wife, Jennifer, Dany accepted an invitation for an apprenticeship with New York chocolatier Hakan Martensson, a friend of his mother's.

"The second I set foot into his facility, it was the next stage of my life," Dany said with a smile. "There were two, three people around marble tables, and they were tempering chocolate."

Tempering is key to chocolate's crunchy texture and glossy appearance, specifically for molded candies. Dany details this essential skill during private workshops for 4 to 10 people. He also shows his students how he molds and decorates the chocolate bonbons in acrylic trays, using various intricate spray techniques and Jackson Pollock-esque designs.

Dany's bonbons resemble precious jewels nestled in elegant, compartmentalized dark navy boxes. “Each one is unique,” Rina said. “His chocolates are so much more complex than mine ever were.”

Dany goes to the farthest difficulty that a chocolatier can with his bonbons. Each bite often holds three or four components, precisely layered. "There is so much attention to detail," Rina said.

For example, the passion fruit bonbon resembles a miniature sunset aglow in orange and gold. Inside the painted paper-thin chocolate shell is a tangy ganache reminiscent of fresh passion fruit and something more. "Did you taste the apricot?" Dany asked later. "I put in just a touch."

Dany has expanded Mostly Chocolate's menu to 22-plus flavors. The most popular, he said, are caramelized goat cheese, followed by hazelnut & poprocks, s'mores, and salted caramel.

The weirdest one he's created, and his favorite, is the rosemary with olive oil. Coming up with flavor ideas is usually easy for the chef. But he's a little stuck about what unique flavors he'll create for Mother's Day. That's because they have to be extra special for Mom.