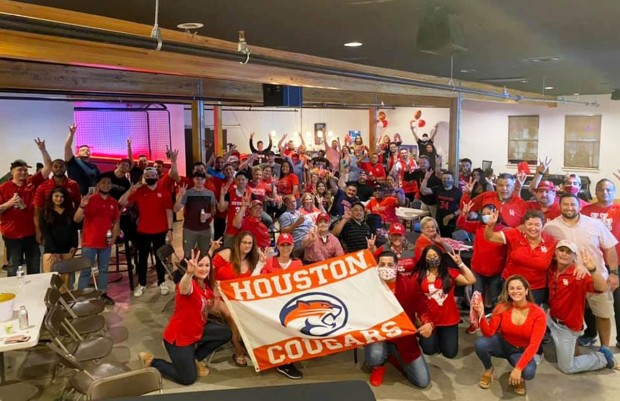 The Code Red tailgate group cheered on UH during a Sweet 16 watch party at Wakefield Crowbar.

After 37 long years of holding our breath, last Monday night when the buzzer sounded and the University of Houston had officially beaten Oregon State, H-town let out a collective sigh of relief, raising our Cougar paws in celebration.

UH flags are flying high. Houston City Hall and the Montrose bridges are lit up red. Space Center Houston lit up the Falcon 9 rocket in red and white in celebration of the Final Four appearance. Houstonians are donning red attire. Mattress Mack has made a million-dollar bet on the home team to win. Bring on Final Four Fan Fever! 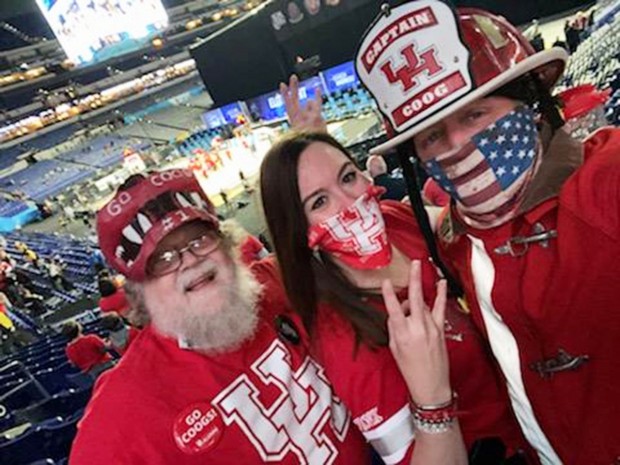 Cougars fan Allison Poore knows just how happy the UH players and coaches were when the team won on March 30. Allison was in Indianapolis with her friend, Freddie Mclemore, watching (and celebrating) the mighty Coogs’ victory.

“Having attended most of the UH home games over the last few seasons and then the Elite Eight games, I can tell these players love one another and their coaches. They are a family and play for each other. And that's what makes them the best. Coog fans have been waiting a long time for this moment, so let's Go Coogs!”

Allison watched UH’s Sweet Sixteen and earlier March Madness games in Houston with the Code Red Tailgaters, a group of spirited UH tailgaters, at the Wakefield Crowbar. Allison will be headed back to Indianapolis again this weekend and she knows exactly what she’s packing.

“My shirt is the same in all of my UH basketball game pics because it is my official game day shirt. You can bet it will be on the plane with me this Saturday when I travel back to Indy for the Final Four.”

These days, Lee Ann Payne is a fan of the Pershing Pandas where her sons, Braeden and Aaron, attend school, but her heart is still true to the Dickinson High School Gators (and her ’90s marching band). Lee Ann was happy to hear about a fellow Dickinson alum that has been getting some VIP treatment.

This time last year, UH Cougar #12, Tramon Mark, and his Dickinson High School basketball teammates were headed to the state playoffs, which were unfortunately cancelled due to COVID. Now just one year later, he’s playing for Houston in the NCAA Final Four. Dickinson ISD recently showed their support for Tramon and the University of Houston with students and faculty wearing red to school.

Lee Ann and Tramon have something else in common…they are both UH Cougars! Lee Ann shared, “I’m so proud to see a fellow Gator excel at being a Cougar! Small-town pride meets big-city love.”

Leo Pappas wore his UH Cougar bandana and leash to watch the Houston-Oregon State game at Kirby Ice House. His Cougar-loving family, Gus (a former UH cheerleader), Pam, and Lexi, joined in the fun. Leo is normally not a fan of cats but makes an exception for the Houston Cougars. He looks forward to watching them win the Final Four. (Bonus if UH wins because when his people are happy, Leo usually gets extra treats!) 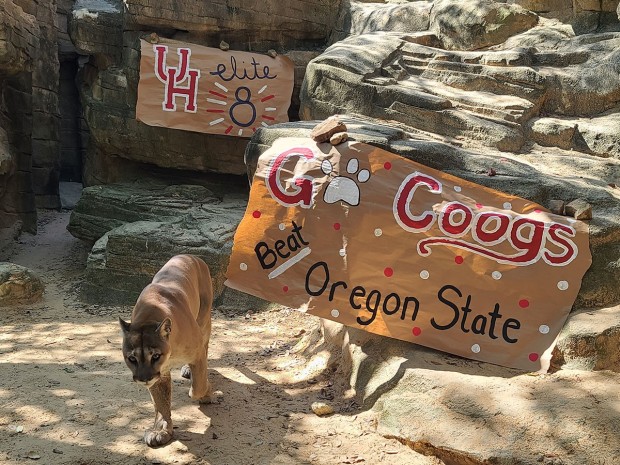 One of the University of Houston’s most dedicated (and sharpest-toothed) fans is Shasta, the real-live cougar who lives at the Houston Zoo. Shasta has been decorating his den with signs to give his fellow Cougars some encouragement during their March Madness games. His zookeepers are helping him make new signs for the Final Four games this weekend.

Shasta and the Houston Zoo love the University of Houston so much that UH students always get in free with their student ID. (Due to COVID protocol, tickets must be reserved online before visits.)

When UH Basketball coach Kelvin Sampson started at UH five years ago, he walked around campus asking students to please come to games. The last few years, the team’s mantra has been #forthecity. Now this group of hardworking players are representing our city.

This week, no matter where your college team loyalties lie, put on something red and cheer for the University of Houston Cougars. Unless you’re a Baylor Bears fan…then you’ll probably be wearing green and gold.

University of Houston will play Baylor, Saturday, April 3 at 4:14 p.m. The winner will play in the National Championship on Monday, April 5, 8:20 p.m. 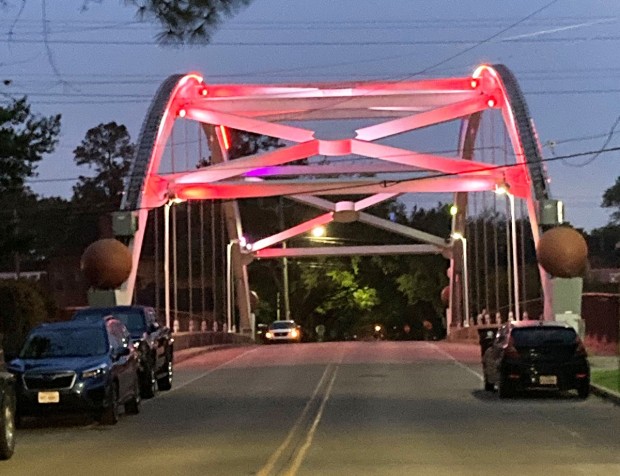 The Montrose bridges are lit up red to show Houston's support of the UH Coogs being in the Final Four. 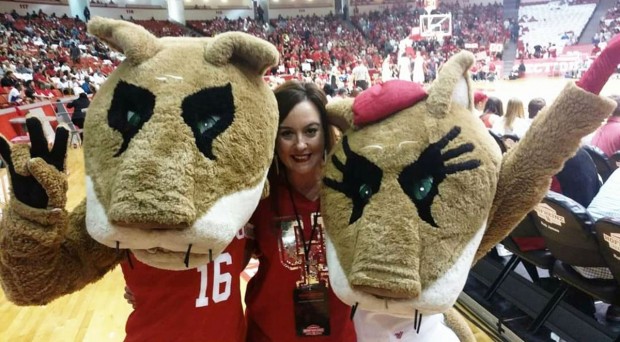 Allison Poore stands between Shasta and Sasha to make a "Coog Sandwich." 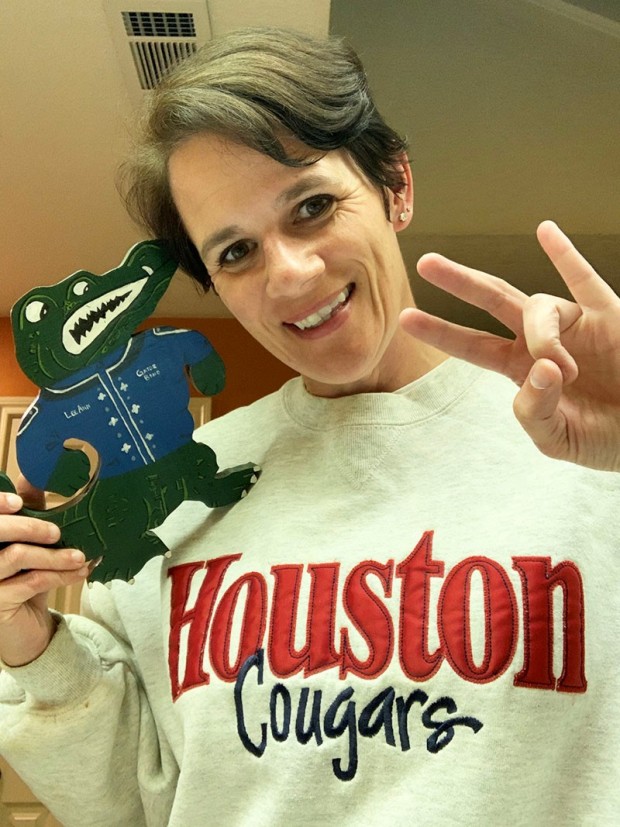 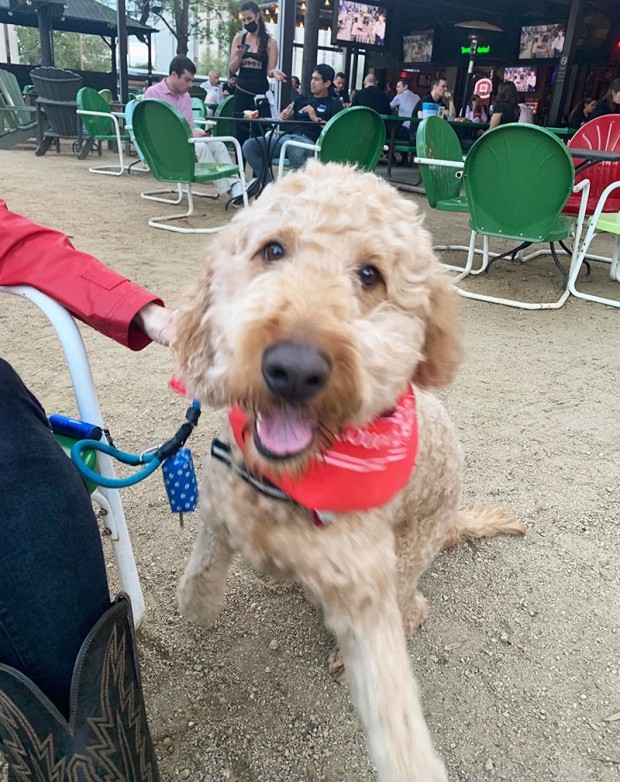