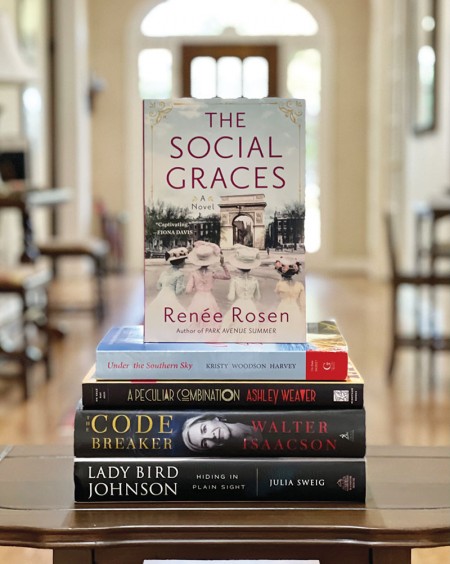 WHAT TO READ This month's picks include a biography about the creator of a cutting-edge gene-editing tool, historical fiction about the rivalry between Caroline Astor and Alva Vanderbilt, the start of a clever historical fiction mystery series, Southern fiction focusing on family that will be perfect for the beach, and an in-depth biography of Lady Bird Johnson.

The Code Breaker: Jennifer Doudna, Gene Editing, and the Future of the Human Race by Walter Isaacson – 2020 Nobel Prize winner Jennifer Doudna’s contributions to the world will not be fully known for years and possibly decades, but her development with collaborator Emmanuelle Charpentier of CRISPR, an easy-to-use gene-editing technology, is revolutionizing modern science and medicine. Following this life-changing creation dubbed “the most important biological advance since … the discovery of the structure of DNA,” Doudna, a biochemist and gene scientist, has worked to tackle the moral issues associated with the invention, balancing the ability to better fight off new viruses such as the coronavirus and help prevent depression, with allowing parents to choose a child’s gender, intelligence, or eye color. In this exhaustively researched book, Isaacson chronicles the advent of a major new technology and what it may mean for science and the world.

Lady Bird Johnson: Hiding in Plain Sight by Julia Sweig – Lady Bird Johnson: Hiding in Plain Sight seeks to correct the misconception that Claudia Alta “Lady Bird” Johnson’s role as First Lady was uneventful by documenting her many contributions while in office. From the incredible strategy memo she created for Lyndon Johnson when he was debating whether to run for president to managing the White House during one of the country’s most tumultuous decades, Lady Bird served as one of her husband’s most respected and valued political consultants. She treated the East Wing as a professional office, creating her own initiatives including comprehensive environmental protections and encouraging women to pursue their own careers. In Lady Bird Johnson: Hiding in Plain Sight, Julia Sweig provides a new understanding of Lady Bird’s legacy, including her important progress on environmental, racial, and women’s issues.

A Peculiar Combination by Ashley Weaver – A Peculiar Combination is the first in a new historical mystery series by Ashley Weaver starring Electra (“Ellie”) McDonnell, a highly likeable heroine who is independent and forward-thinking. Ellie and her family are known for their breaking-and-entering skills because they earn their living by stealing into the homes of London’s wealthy residents at night and cracking open their safes. When a job goes awry and Ellie and her uncle are caught, they find themselves recruited to join the war effort by helping a branch of the British government steal some important documents. Filled with witty dialogue and genuinely entertaining characters, A Peculiar Combination is a fantastic read, and I am already looking forward to the next in the series.

The Social Graces by Renée Rosen – In The Social Graces, Rosen highlights the legendary feud between grand dames Alva Vanderbilt and Caroline Astor regarding who would reign supreme over New York City society during the Gilded Age. Mrs. Astor, known for determining who made the powerful Four Hundred list and setting the standard for what was in and what was not, represented the old money group, while Alva Vanderbilt, who married into the newly wealthy Vanderbilt family, continually worked to be accepted by New York society and wanted to eventually take Caroline Astor’s place. The feud begins when Alva Vanderbilt marries into the Vanderbilt family, and most of the upper crust families refuse to acknowledge her. But Alva is determined to make her place in society, setting off a battle with Caroline Astor that raged across decades and included some pretty juicy drama.

Under the Southern Sky by Kristy Woodson Harvey – In her best book yet, Kristy Woodson Harvey tackles a tough topic with grace and crafts a highly memorable tale. Newly separated from her husband and on the trail of a new story, Amelia Buxton stumbles across information she wasn’t supposed to see. Her childhood friend Parker lost his wife three years ago, and Amelia learns that embryos he and his wife had saved are deemed “abandoned” and are soon to be destroyed. At the risk of upending Parker’s world since he has been unable to move on from his wife’s death, Amelia tells Parker about the embryos (long forgotten by Parker), and this information sets Parker down a new and uncertain path that will ultimately help him move forward while also honoring his past. The beautifully rendered setting in Under the Southern Sky amplifies an already fabulous tale that has stayed with me.