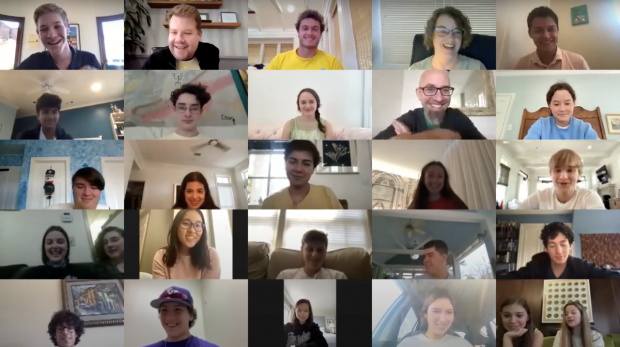 The Zoom doorbell sounded as comedian James Corden, in a yellow Kinkaid Motion Picture Club t-shirt, entered the meeting room with a magnanimous “Hello!”, not skipping a beat to jokingly chide club president Henry Segal, class of ’23, on the meeting’s encryption settings that caused him a slight delay.

Nearly 40 pairs of eager eyes, students and teachers alike, gleamed as Corden took them on a tour of his career and gave them advice on dealing with rejection and thriving even in not-so-great times. The power he held over even a digital audience was palpable.

“After our meeting, I truly understood why he is such a great entertainer. It’s not just because of the jokes he comes up with, but how engages with the whole room,” Henry said. “I’m so glad my club had the chance to speak with him.”

Henry's Motion Picture Club is relatively new to Kinkaid’s thriving student association and club space, having been founded at the beginning of the 2020-2021 school year. But if meeting such a celebrity as Corden is any proof, you shouldn’t judge the club based on its age. Club members have spoken with the creators of the film Catfish, from where the popular social media term referring to the creation of a “fictional online persona” comes. Most recently, the club hosted Steve Bellamy, the President of Kodak's Motion Picture Division and the founder of the Tennis/Surf/Skate/Ski Channels.

The idea of the Motion Picture Club came to Henry this past summer.

“I started the Motion Picture Club so I could find an organized time to talk about any movie or TV show with other interested classmates," said Henry. "Apart from having fun while watching movies, our club is committed to learning from the firsthand experiences of guests, or honorary members, that we bring in.”

The procedure for the club normally involves voting for a film to watch by the next meeting and then discussing the film and its intricacies. Members soon realized that their questions could only be answered by the creators themselves. So, Henry began reaching out to speakers “so that the attendees can learn from their experiences.”

Coming to Corden, after several successful guest speakers, Henry decided to pull out a trump card: the famed comedian himself. Henry had met him briefly at a restaurant two years prior: “After his meal, [Corden] approached our table to tell us how he thought it was so cool that we were just having a night out and talking to each other without staring at our phones. While we talked for only a few minutes, I never forgot that moment.”

He pitched his idea of a club meeting with Corden to an individual who works closely with him, who in turn spoke with Corden himself. “James agreed, and from there we worked to schedule around his busy production schedule as The Late Late Show airs a new episode every single weeknight.”

It took a bit of time, but on March 17 at 2 p.m. CT, Corden popped up as a guest in Henry's personal meeting room, wearing the club t-shirt in what was an intriguing twist for the attendees. Out of fear of a last-minute cancellation and in appreciation of the initial “yes” from Corden, Henry sent a “thank you in advance” note to his studio. With the letter, he also Fed-Ex’d some of our club’s T-shirts, not knowing if they would arrive in time. They did, though, and Corden proudly donned the yellow tee on the call.

The meeting itself ran a bit under 30 minutes, with attendance opened up to the entire Upper School. At the 26-minute mark, Corden signed off with personalized compliments to each attendee. Corden talked about his youth in Britain, how he got started with comedy, the benefits of having a career with ups and downs, and, the point that club members unanimously loved the most, that a real goal is not a destination but being able to love what you do every day.

“While seemingly cliche, his radiating happiness and active participation in our meeting showed that this was especially true, treating me like an old friend and even putting off a scheduled meeting to say goodbye to us,” Henry beamed.

He added that, after the meeting, he had a deeper understanding of Corden’s talent and success; it’s all about his attitude and how he treats others.

“I think that the club was refreshed by how grounded and appreciative of his life James was," said Henry. "Also, the reason he is such a great entertainer lies in the fact that he engages with the whole room. As James described his show as more of a dinner party than an interview, he makes others comfortable by treating everybody like they are his best friend, like he did with us.”

Henry wasn’t alone in the positive reaction. All of the club members reacted overwhelmingly positively and many said that the meeting “made [their] spring break.”