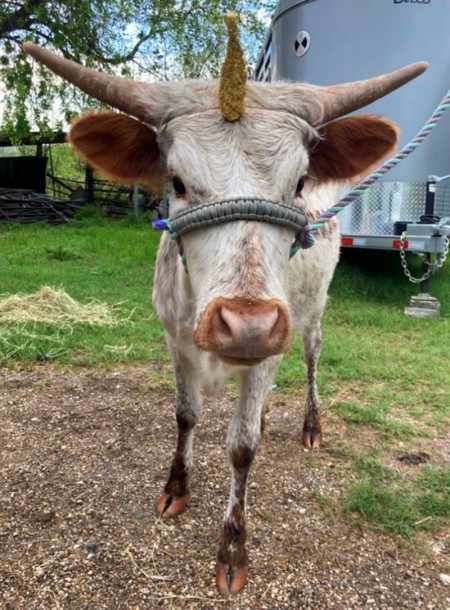 Bellaire teenagers came to the rescue when they spotted Belle, a rare Texihorn that was found with a hurt leg.

A group of local high schoolers recently met up to enjoy some time outdoors together. They had no idea that their day in the park would turn them into Good Samaritans on an unimaginable adventure.

The teenagers (who asked to remain anonymous) were playing disc golf in a Bellaire park when they heard a bleating noise, similar to a sheep’s but a higher pitch. They followed the sound to some bushes. There, they discovered a small, cow-looking horned animal that was limping.

The group worked together to transport the injured animal to the Houston SPCA near Memorial Park where their veterinary team concluded that the injury to the leg was not life-threatening and would easily heal.

It was determined that the unique-looking rescued animal was the rarely-spotted Texihorn. The native creature is a descendent of the longhorn and unicorn species with an impressive set of three horns: two longer horns on each side of the head and one horn in the middle of the forehead. Only a few have ever captured an actual photo of the Texihorn, so this one has already become quite a celebrity.

The high schoolers decided to name their new friend Belle since she was found in Bellaire. They were relieved that she would heal from her injuries.

The few rare sightings of the Texihorn are usually in April. Especially on April 1.

Many thanks to Sarah Buentello, Alexis Buentello, Robert Pedraza, and Gabby Pedraza and the Longhorn Family show team for letting us decorate their miniature longhorn, Moonstone, who seemed to enjoy posing for the role of a Texihorn.

We appreciate the Houston SPCA playing along, too. As a Campus For All Animals, the rescue and protection organization not only helps companion animals, but horses and farm animals, small pets and native wildlife. And yes, even Texihorns.