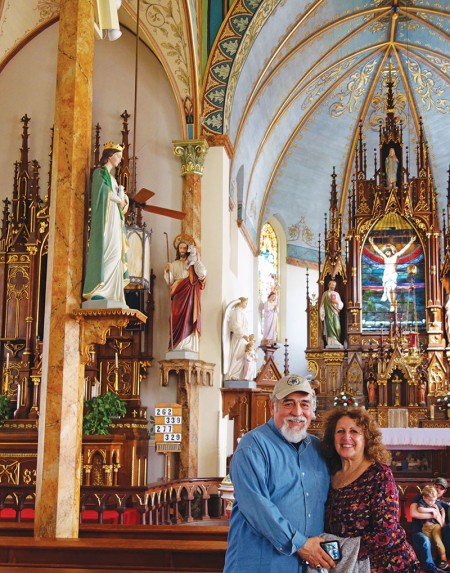 Carlos Rios and Barbara Canetti take a pause from their tour of the Schulenburg painted churches, a celebration of their 40th wedding anniversary. (Photo: Carlos Rios)

With travel opening back up around the country, a simpler, slower way of life is beckoning. Many are exploring backroads and byways, lingering in the places closer to home that they never had time for before. Small towns, nature-based destinations, and family time are calling to travelers these days. We visited with three Houston families about their recent travels to three special places that have captured their hearts.

Barbara Canetti and Carlos Rios were looking for a quiet, relaxing place to celebrate their 40th anniversary. Carlos, a former photographer for The Houston Chronicle, and Barbara, a former journalist for UPI, had always wanted to go to Schulenburg and see the legendary painted churches but had never gotten around to it.

The churches, among more than 20 scattered around Texas, were built in the late 1800s and early 1900s by German and Czech immigrants. A friend who lived there invited them to come, and they decided to take her up on it. And so it was that on the weekend of their 40th, they wandered from Galveston up to Schulenburg via the winding backroads.

“We were taking the beltway from Galveston but made a wrong turn and got off on 59 by mistake – and though it took us out of the way, it was a good way,” Barbara said. The couple took Old Highway 90 West, instead of the freeway, and their journey was dotted with cornfields and small towns. “I imagine it’s still a lot like what it used to look like,” she said.

They finally reached Schulenburg and checked into their Airbnb, a cute historic home in a comfortable neighborhood, and headed downtown. “It’s a cute little town, very clean, with lots of really cool old buildings,” said Barbara. They arrived in time for outdoor lunch at Tillie’s Café and then explored the Stanzel Model Aircraft Museum.

Victor and Joseph Stanzel, two brothers who grew up plowing a farm near Schulenburg, built a model plane factory there, and the factory, the homestead, and the museum make up the complex. Carlos was fascinated; he perused the model plane collection, remembering the vintage balsam-wood flyers and superflyers of his childhood, when he used to send them soaring skyward.

They finished the day at Lucy Tequilas. Other dining highlights were the Garden Company Marketplace & Café and the City Market, where you have to call ahead to reserve your barbecue because they always sell out.

The next morning, friend Suzanne McDaniels picked them up for a tour of three churches, spread out over a 10-mile vicinity from Schulenburg. The churches – and the tour – lived up to expectations. Tiny on the outside, but with soaring vaulted ceilings and gothic filigrees that brought to mind Gaudi’s Sagrada Familia in Barcelona.

“They are just magnificent,” said Barbara. “They are small churches – almost quaint and storybook looking from the outside, but when you walk in, you felt an appreciation of the 100-year-old building, and the artwork was really something to behold.”

Angels peer down from the ceilings, and crosses are featured throughout. But more than religious iconography, the scenes are pastoral; foliage, vines, latticework, and delicate floral designs splash color across the pastel-painted arches and walls. The European-immigrant artists painted architectural features, as well; rough-hewn beams turn out to be paint, rather than wood, and likewise with the “marble” pillars.

Some churches, like St. Mary’s Catholic Church in High Hill, have their original paintings intact, immaculately maintained by descendants of the original immigrants; others, like Saints Cyril and Methodius Catholic Church in Dubina, have been restored. It was whitewashed in the 1950s, but the congregation recovered it, using old photographs and stencils as references.  Artists said they received divine guidance in recovering the old designs.

Barbara and Carlos met a woman in her 60s who as a girl was part of that team. Meeting people like her was one of the best parts of the visit, Barbara said. “I felt they had a stake in their church, they took pride in it,” she said. “For me, it was like a tourist attraction, but for them, that’s their church, and it had a very special significance for them.” 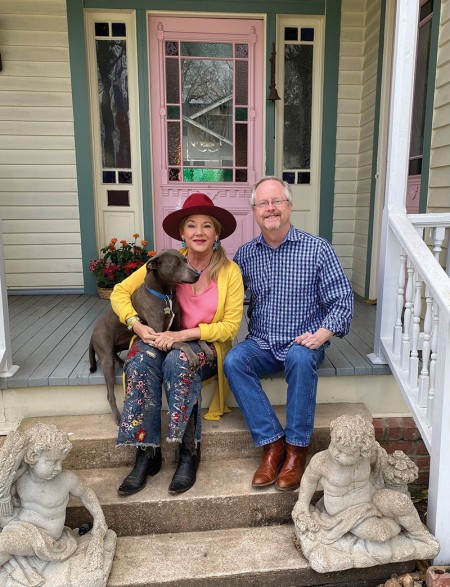 HISTORIC HOME Wendy and Cade Burks with their Blue Lacy, Dax, on the front porch of their 1896 Shotgun Victorian house in Fayetteville. The house is registered on both the National and Texas registers of historic places.

Fayetteville: Step back in time

With the onset of the pandemic, Wendy and Cade Burks felt trapped in Houston. They longed for a simpler way of life. Wendy loved times spent at her cousin’s retreat in Round Top and they began looking for a place there. A friend suggested Fayetteville, and Cade ended an MS 150 there. Its vintage town square and courthouse and its artsy feel immediately charmed them.

They began looking for property, and the first day they found it: a tiny 1896 shotgun Victorian, listed on the state and national historic registers. The town itself is listed on the National Register of Historic Places.

Wendy loves the laid-back feel and the walkability; her house is just two blocks from the town square. “Usually I park my car and don’t get in it the whole four days I’m here,” she said. “I really don’t even go to the grocery store; there’s all these great restaurants. You can always find us at Joe’s Place on Friday nights, our favorite neighborhood haunt.”

She loves the friendliness of the locals – many, it turns out, are from Houston. But friendliness is built into the way of life in Fayetteville, it seems.

“Everyone’s on their front porches here,” she said. “These old homes have beautiful front porches, and you get to know all your neighbors.”

Three houses down is their church – St. Paul Lutheran – and on Sundays they walk across the street to the Grand Fayette Hotel for brunch.

Every now and then there’s a festival that picks up the pace – like the Antique on the Square Opening with Muffins and Mimosas.

For visitors, Wendy recommends the charming bed and breakfasts in the area. There’s nearby Fayette Lake, a baseball park that’s busy with tournaments, good shopping on the square, and a “fabulous” lineup of art exhibits in the town’s many galleries. May 1 and 2 is the annual not-to-be-missed Art Walk, hosted by Arts for Rural Texas.

“Fayetteville is a quaint town with wonderful people and a relaxing vibe. We feel at home here,” she said. 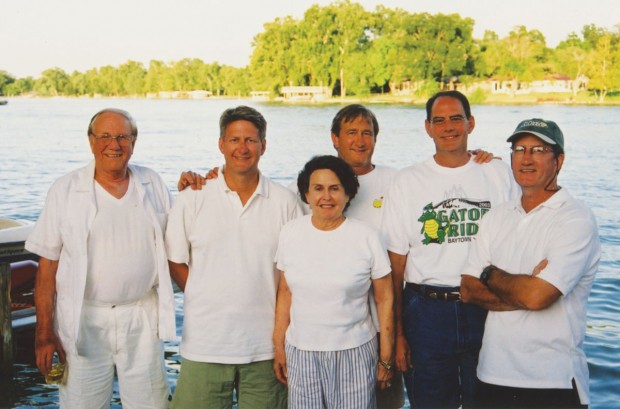 For four generations of Mundingers, the crystalline blue waters of Lake McQueeney have been home for one special summer weekend since 1966. It all started when friends of the Mundingers, the Chandlers, were on their way to Marble Falls when a tire fire made them pull over at Lake McQueeney while making repairs.

They loved it so much they decided to stay, and next time, they invited their friends the Mundingers. Catherine Chandler ended up marrying Dan, one of the four Mundinger boys – and the rest is history.

Betty Mundinger married the baby of the family, Erich, in 1987 and has been joining the family gatherings ever since. They have only missed two years since she joined the clan: 17 years ago, when the boys’ mother died, and then last year, because of Covid.

“Usually we go the week before or after the 4th – and it is sacred,” Betty said. “We work our summers around it.”

Now that the grandkids are married with children of their own, gatherings bring up to 55 people. There’s no place big enough to hold them all at Christmas, so Lake McQueeney with its 1950s-era Lake Breeze Ski Lodge and its indoor-outdoor restaurant has become the family’s common ground.

“We eat there, swim there, boat there, do it all right there,” she said. “We sit outside and talk, and we eat breakfast, lunch, and dinner at the lodge.” Sometimes the guys play golf; sometimes the kids will float down the Guadalupe River.

It’s a small lodge and a small lake, and the Mundingers take over during their four days there. The lake is one of five in the Guadalupe River Valley, and to the Mundingers and many others, it’s the jewel in the crown.

A dam failure at Lake Dunlap, in the same system as Lake McQueeney, recently put the future of all five lakes in doubt. The Guadalupe Blanco River Association announced plans to drain the lake to work on the dam, and the neighbors organized to save it. Last November, residents passed a bond measure to raise money for dam repairs, and its future once more seems assured.

“It’s beautiful; every single house on the lake is gorgeous,” said Betty.

The Lake Breeze Ski Lodge is rightly named, says Betty, as you can always catch a breeze on the deck. Skiing is a major attraction, with most boasting varying degrees of skill on the boards – and even a couple of barefoot water skiers.

“All the boys are beautiful water skiers,” said Betty, referring to Erich and his brothers, who are also handy with a boat. Her daughters learned to ski there along with their cousins, and now the grandchildren are learning how to ski. “Our kids are kind of passing the torch,” she said.

Dinners can get a little crazy, she said; the family sits there on the restaurant’s deck for many, many hours. “The table looks ridiculous by the time we’re done, with the cups and the alcohol…  and the stories the boys tell, they are funny, funny, funny.”

One time one of the brothers set off fireworks in the restaurant. Another time, one of the girls tried to ski with her feet inserted into two halves of a watermelon.

“I think it’s a gem,” said Betty. “It’s very unique – a place where 50 of us can meet and put our feet up, and the kids can run around and play,” she says. “It’s just a super safe, relaxing place to be; when you get there, you’re on lake time, and it’s one of the most wonderful places to sit and visit with family.”

For more on the legendary painted churches in Schulenburg, read Texas' Painted Churches by Annie McQueen. Share your favorite Texas town with us, or any special travel stories, by emailing [email protected]. 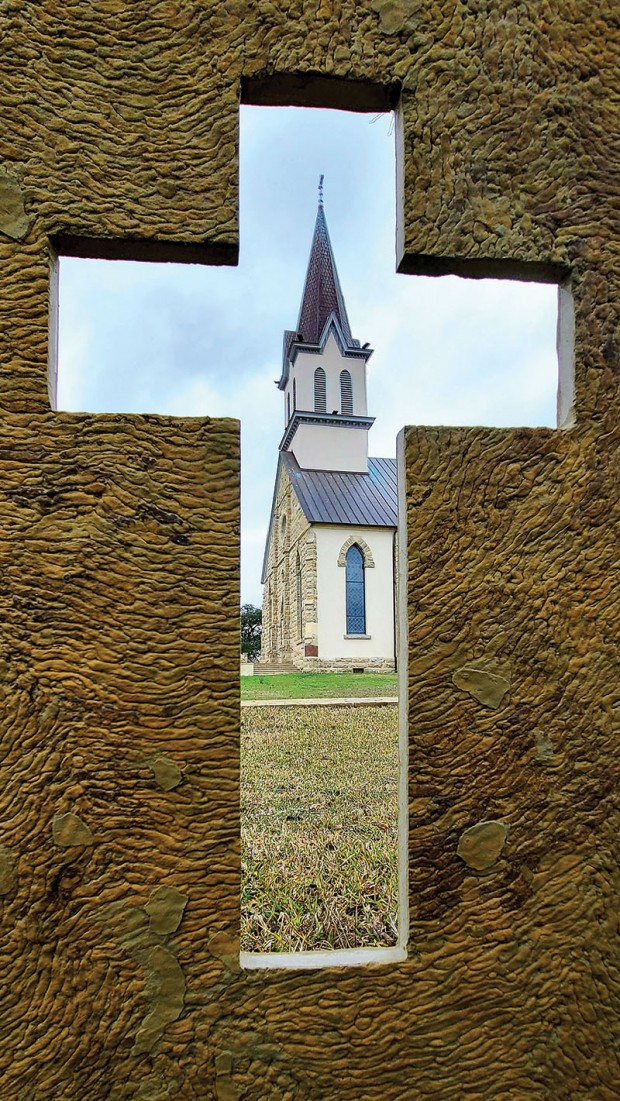 A glimpse of St. Mary's Catholic Church, framed through the portal of a nearby stone marker. (Photo: Carlos Rios) 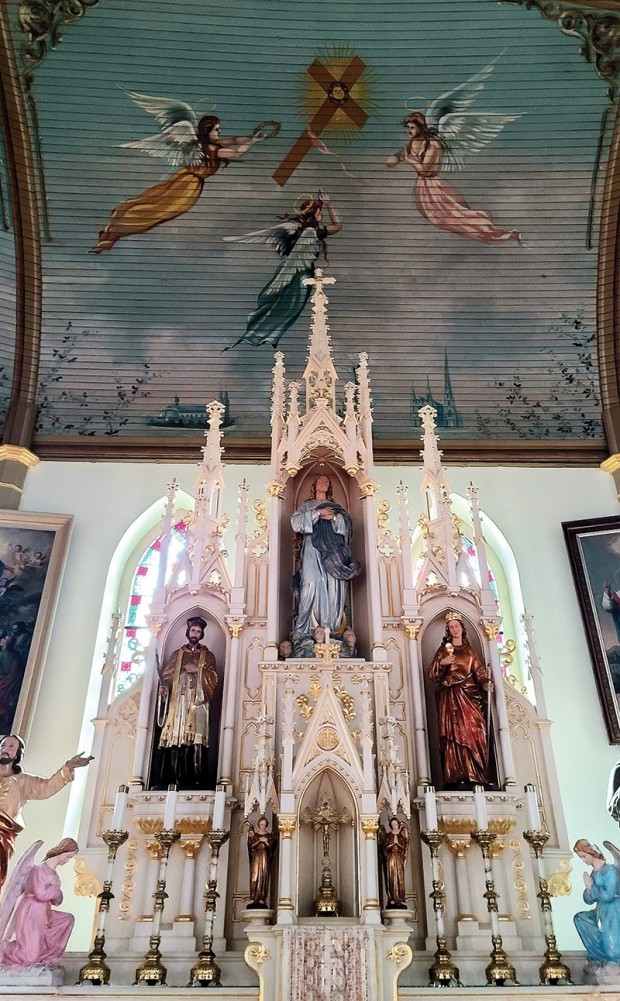 Inside St. Mary's, known as the Queen of the Painted Churches. (Photo: Carlos Rios) 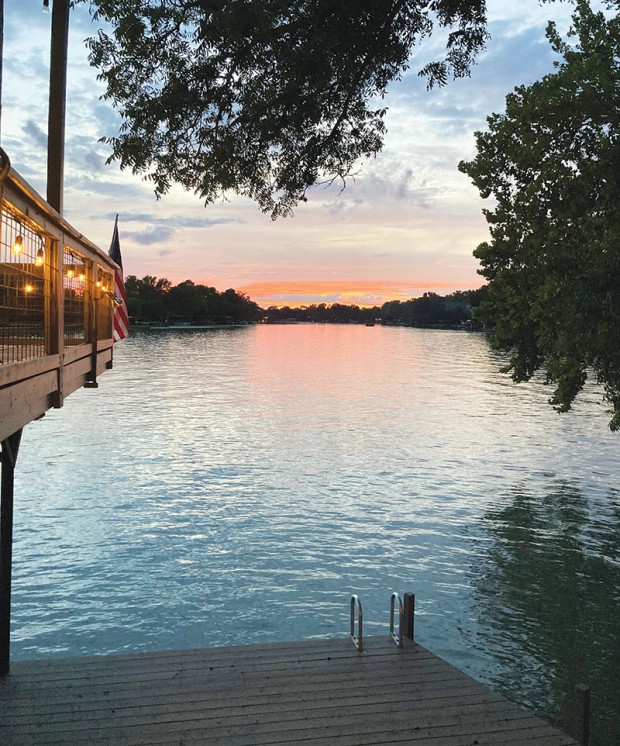 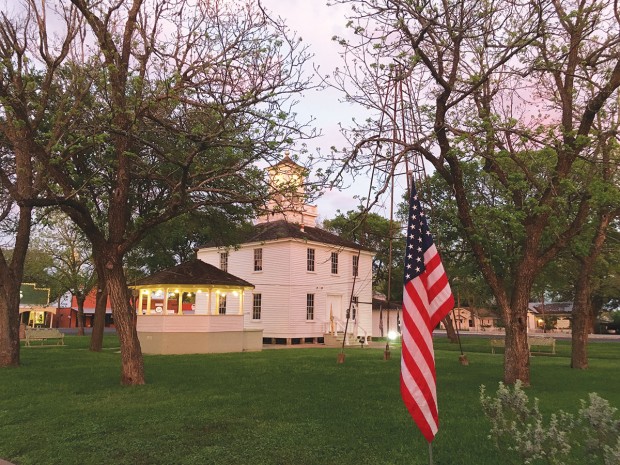 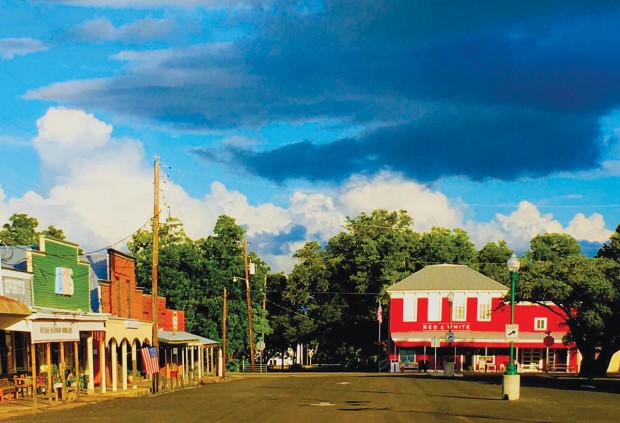 The Fayetteville town square that hosts many celebrations and festivals. (Photo: Emil Knodell) 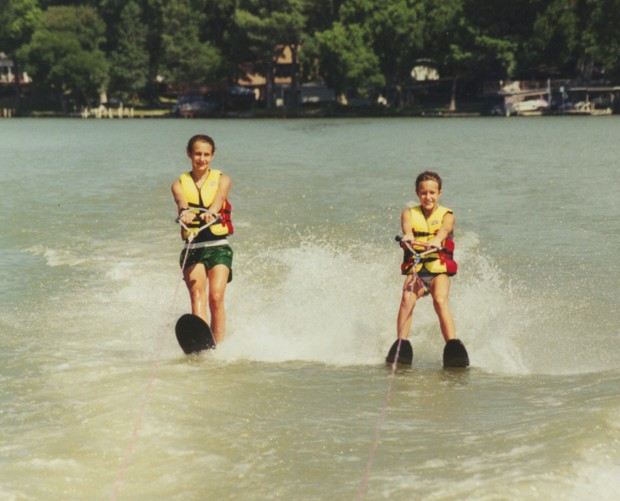 Riley Mundinger Landry, 12 at the time, and Hilary Mundinger Holmes, 10 at the time – sisters following in their dad Erich’s footsteps. Now 32 and 30, respectively, they still ski on the lake whenever they get the chance.