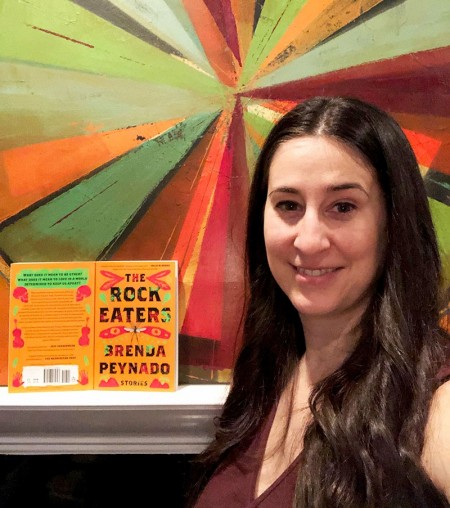 Author and new Houstonian Brenda Peynado has a debut collection of short stories about what it means to be human in 2021.

Author Brenda Peynado is a new Houstonian and Buzz resident who recently moved here from Orlando, Fl. She teaches creative writing at the University of Houston, and her fabulous debut collection of short stories entitled The Rock Eaters published on May 11 of this year to much acclaim.

Brenda’s stories have been described as “genre-bending sociopolitical commentary with prose that shines” (the Washington Post) and are a mixture of science fiction, fantasy, and magical realism that focus on the issues we as humans face today. The stories are timely, thought-provoking and occasionally heartbreaking, and my favorites are “The Kite Maker,” “The Radioactives,” and “The Man I Could Be.” Enjoy this Q & A with Brenda and then pick up a copy of The Rock Eaters at your nearest independent bookstore.

Tell me a little bit about your book.
The Rock Eaters is a short story collection that crosses genres and dimensions, featuring angels perched on rooftops, alien arrivals, basement ghosts teaching love, Latin American superheroes, and Latina girlhood about what it means to love across borders and walls, even those we erect inside ourselves.

What comes first, the plot or the characters?
It’s characters before plot, and image before character. Usually I get a flash of an image, and then I think, what kind of a character would feel heartbreak at this image? Then the plot comes from breaking that character. In “The Kite Maker,” for example, I suddenly imagined all of these aliens flying kites in the park, singing. And then I thought of why that would be heartbreaking for them: they’ve lost their homeworld, and these flying kites reminds them of it. The main character feels this doubly deeply, because she is partly responsible for the tragedy that befalls them. 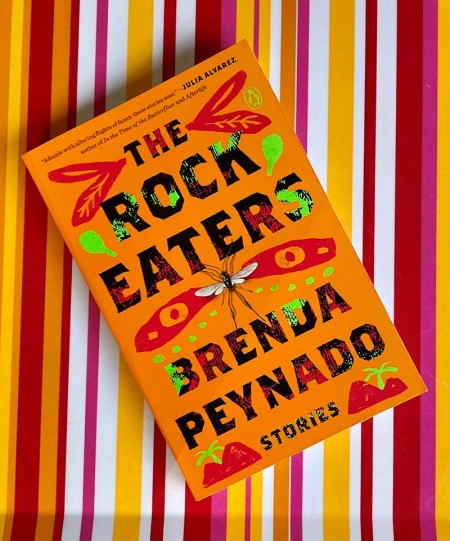 The Rock Eaters is a short story collection filled with a combination of magical realism, fantasy and more with a focus on the ups and downs of being human.

What surprised you the most about the book as you worked on it?
I wrote most of these stories over the course of a decade, but I was surprised that they ended up feeling so timely. “The Radioactives,” features a wall on the border with Mexico, written before Trump made that a campaign issue. And “The Touches,” written before the pandemic, is about a world where people retreat into quarantine boxes to escape an outside ravaged by superbug diseases and pollution, and they carry on their lives in virtual reality instead while their bodies are attended to by robots. It features a main character who elects to have a virtual baby, and she’s thinking about this baby that will only be ever be touched by robots and the legacy of our hunger for connection. This last year, COVID-19 happened, of course, I became pregnant with my first child, and I bought an Oculus Quest VR headset, so I spent most of the first pandemic summer and my first trimester in VR. I spent a lot of time thinking about that story and our hunger for connection.

What do you hope your readers take away from your book?
Most of the stories are love stories of a sort, between lovers, friends, frenemies, and there’s a lot of heartbreak in it. But the last story especially ends on a note of wide open hope, with its Latin American superheroes -heroes coming to save us. I want the reader to be taken through the various boundaries that divide us, but leave the book feeling buoyed by hope, like surmounting those barriers is possible, and feel like the world is wide open to them if their eyes are also open.

Are you working on anything at the present that you would like to share with me?
I am working on a novel about the 1965 civil war in the Dominican Republic and the subsequent American invasion to quell the fighting. The main character is a girl who is granted the power to see all possible futures on the night that the Americans arrive. She sees her mother’s death in many of those futures, so she has to mastermind the actions of people all over the city to try to save her, including an American marine that can trade places with his shadow, a Dominican housewife who can bring people back from the dead, and the strongest man in the world.

What are you currently reading and what is on your TBR (to be read) list?
I am reading Nancy Johnson’s The Kindest Lie. I can’t wait to read Stacey Swann’s Olympus, Texas, especially now that we’ve just moved to Texas.

Share something your readers wouldn’t know about you.
I used to work in computer security before committing to writing. Working in tech has likely influenced my writing’s way of mixing science fiction, dystopia, magic, and realism.