Boy Scouts in the Big Thicket

For one misty Saturday in April, the Big Thicket National Preserve rang out with the joyful sounds of boys breaking out of quarantine mode as Boy Scout Troop 354 took to the waters of Village Creek in their first campout since before the Covid-19 pandemic.

The canoe trip had been the idea of the troop’s student leaders, because Troop 354 is a scout-led troop, explained scoutmaster Casey Brown, who along with other parent leaders tries to stay in the background and let the kids guide the process. The Big Thicket had been a destination for the group three years ago, and a small handful of veteran scouts remembered and recommended it, so the East Texas wilderness preserve made the top of the list for their first weekend outing.

So it was that on the morning of April 10, 14-year-old Morgan Tannery met his scout mates in person for the very first time, after more than a year of online meetings and events. 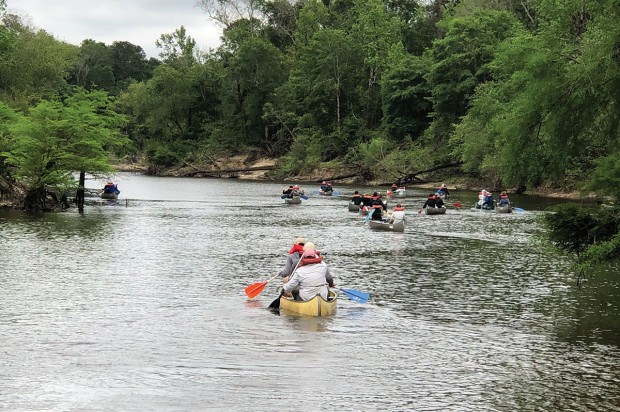 The group as they departed from the put-in spot at the very beginning of the trip, with many scouts figuring out how to keep their canoes going in a straight line.

“I was really excited about it – I haven't been on a canoeing campout ever,” said Morgan in a Zoom interview with Casey and fellow scouts Matthew Berman and Harris Lingle. “It was the first time I got to go on a campout with my Kinkaid School friends – and I didn't feel like an outsider. I guess I felt happier and more prepared.”

Scouting during a pandemic, like everything else, had been a challenge. But the boys of Troop 354 – who normally meet at the “Scout Hut” built for them by troop sponsor St. Martin’s Episcopal Church in Tanglewood – tackled the quarantine and more than a year of virtual meetings with creativity and determination. For a year they managed to keep the troop together through weekly meetings on Zoom and virtual activities, including cyber-connected campouts – with boys setting up tents in their own backyards and linking online throughout the night.

When in-person classes began, student scout leaders like Matthew were able to identify some of the new recruits who had joined since the pandemic began – boys like Morgan, for example – and orient them and help them to feel more included.

Matthew was part of the student-leader team that came up with the idea of the Big Thicket canoe trip at their quarterly planning meeting. In the beginning, he said, there was a fair amount of apprehension about whether it would really be possible, given the situation with the pandemic. 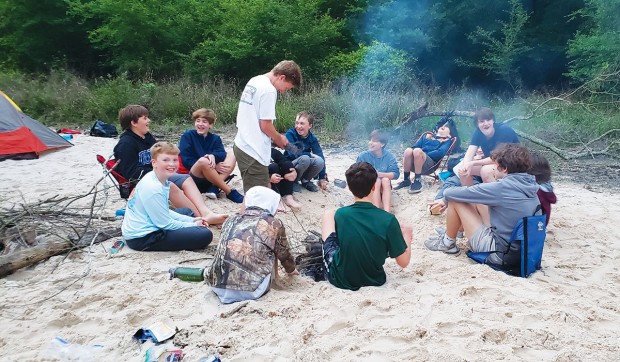 Boys gather around the campfire and share stories, a highlight of the evening activities.

“At first it was a little like, are we going to be able to do it, or is it just going to end up being more disappointing when we can't do it?” he recalled. “But we got closer to the time and we realized, hey, we can do this. It's safe enough at this point. And we have enough people that can come that it's a good group and we can still be safe within limitations.”

The campout was indeed affected by Covid restrictions, with the mask mandate and their usual two-night event reduced to one, with each parent bringing their son all the way to the destination instead of organizing the usual carpools. But even so, it was a festive occasion.

The morning was cloudy, and a little light rain was falling when they arrived. But none of that dampened their spirits that Saturday morning as the group of 30 boys and dads met at the put-in point where Village Creek crosses Highway 327. They celebrated with a little bit of touch football there on the riverbank as they waited for their outfitter to deliver their canoes.

“It was great to hear them – they were all so excited about hanging out with their friends,” recalled Casey. “I didn’t realize how much the scouts had missed it.” 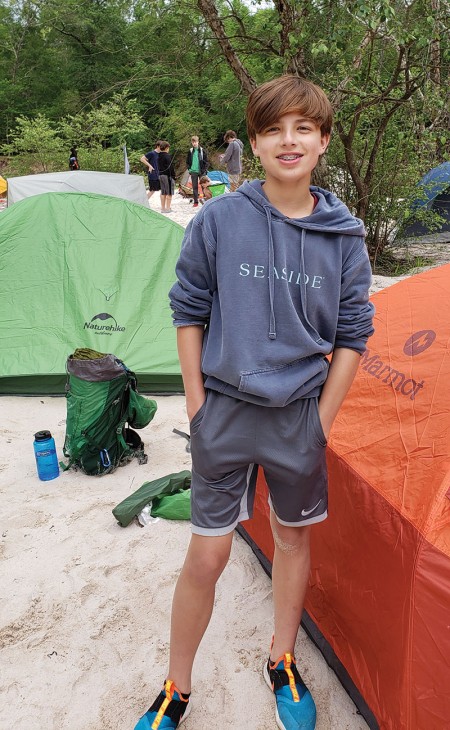 Thomas Guilanshah pauses among the tents for a quick photo opp.

The plan was to spend the night camping on the river, doing most of the 12-mile paddle on the first day. Being Boy Scouts, they were nothing if not prepared.

“I think a big part of the packing is just making sure you understand where you're going as well as what kind of conditions will be there,” said Matthew, who spent a good bit of time planning and waterproofing everything with Ziploc bags – his cell phone, his tennis shoes, his first aid kit. Another key for this particular trip was to pack light, as everything would have to go into the canoe with them, placed in big rubber wet sacks to keep everything dry.

Harris was careful to watch the weather in the days leading up to the event, so he knew it would be cool and cloudy, and that he’d need warm gear as well as a swimsuit – but that he wouldn’t need a hat.

They finally got on the river around noon, 12 canoes carrying 23 boys from ages 10 to 16 at all different skill levels from first-timer to expert, and six fathers. Casey began with a talk on the basics of canoeing – how to steer, how to paddle, the job of the person in the bow and in the stern, and basic canoe safety. Then they split up the boys from their fathers who had come along to help.

“It was pretty chaotic at first,” said Casey. “It took about 10 minutes while everybody was trying to figure out which side of the canoe to paddle on, with some guys going around in circles, and other guys taking off like an arrow.” 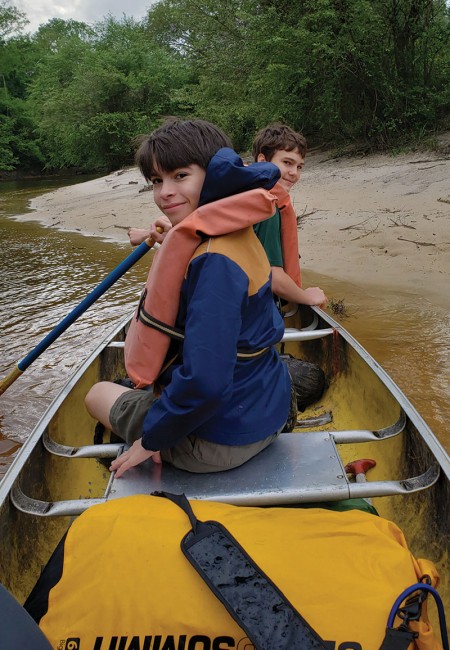 The clear, spring-fed waters of Village Creek are tea-colored, stained with tannins from the acidic leaves of the sweetbay and gallberry holly. After the first mile or so, the boys entered the Big Thicket Preserve and left civilization behind. They spotted an animal plying the waters that some called a beaver, but Casey suspected of being a nutria; either could have been possible, as beavers are native to the area, and the South American nutria was introduced into the Big Thicket some years ago. A small population of American alligators inhabits the zone, but sightings are rare, as are those of the jaguar; Morgan did spot an opossum, however, and a variety of birds and fish were observed, as well as turtles.

One of the things that most impressed Harris was the silence of the place: “Just how quiet it was. I mean… you can hear your thoughts. And it was really nice just to get on the water and not really be talking all that much and just look around you at the nature and just kind of appreciate it. What you can't really do in this day and age.”

To Casey, one of the highlights was just hanging back and observing as the scouts worked together to overcome challenges while developing their skills and leadership capacities, finding their voices, navigating their way through sometimes challenging processes. Like the time that they came upon a big oxbow in the river that curved to the left, while a smaller branch flowed straight ahead – and the kids had about 15 seconds to make a choice.

Casey had studied the map on his phone moments before making the call, so he knew the two branches would rejoin eventually. His group chose the oxbow, but several chose the straight path. It was a tense half-hour or so, ducking low-hanging trees and hoping the group on the other side was doing ok.

“To the extent we safely can, I want the scouts to do the navigating,” he said. “Hopefully, they learned a valuable lesson about really learning to read and follow a map on the river.”

Another time a canoe in front of his got snagged on a downed tree, and his team worked for about 15 minutes to help the other boat get free.

“It was interesting to watch the dynamics of young men learning to work together to lead,” he said. “It was a really great learning experience for them to see how to be put in a new situation where they don't have a lot of skills and figure out on the fly how to do it. 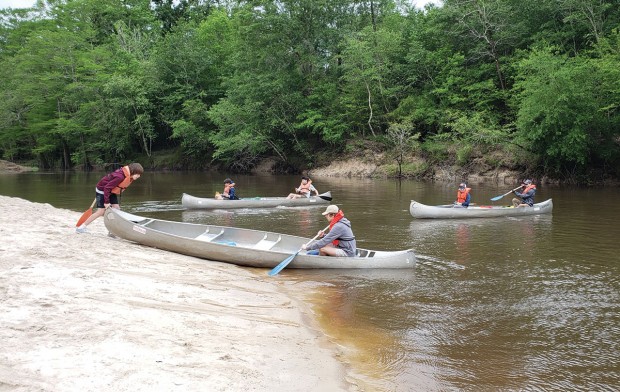 The boys push off after lunch and prepare to canoe the rest of the Saturday leg of the journey.

“In a moment when you're stuck, you don't know how you're going to get unstuck – particularly when you're 12 or 13. Some of them got a little flummoxed at first, but they managed to get their way out of it.”

About halfway to their nighttime destination they pulled over on the pristine white-sand beach of a sandbar – one of the best things about Village Creek, said Casey, comparing it to the beaches in Destin, Fla. There they pulled out their sack lunches, caught their breaths, and enjoyed a picnic. A couple more hours down the river, and it was time to pull over and make camp – a major enterprise for 30 people. They divided into work crews, with one crew filtering the tannin-stained water for dinner, another crew cooking the freeze-dried beef stroganoff and mac and cheese.

Helpful to the cooking process was a favorite item of Casey’s: the Jetboil, a portable cooking system that brings water to a boil in short order.

Another crew washed the dishes, and then it was time to sit around the campfire, relax and catch up. That was a favorite time for everyone, with games like a detective challenge called Mafia and heart-to-heart talks about what to expect in high school, among other topics.

For Casey, who was a member of Troop 354 as a boy and now has circled back to be its scoutmaster and the father of Campbell and Henry Hobbs, two troop members, it’s been especially rewarding. He’s been able to see scouting from a mentor’s perspective and watch the boys take the opportunity to come into their own. There’s really nothing like scouting to give young boys, from middle school up, a chance to lead, he said.

“Sometimes I'll look over and I'll see one of the guys who's now in high school and a leader and working on, you know, getting close to finishing his scouting career, and then think about when he was in the sixth grade and was too afraid to look me in the eye and shake my hand. And now he's developed into this great young man who's got a lot of confidence and self-assuredness that is taking charge of things. So, to see that kind of progress in almost all of them is really, really great.”

10:30 am to 1:00 pm
Location:
The Brookwood Gift & Garden Center
END_OF_DOCUMENT_TOKEN_TO_BE_REPLACED