Bringing baby to the beach 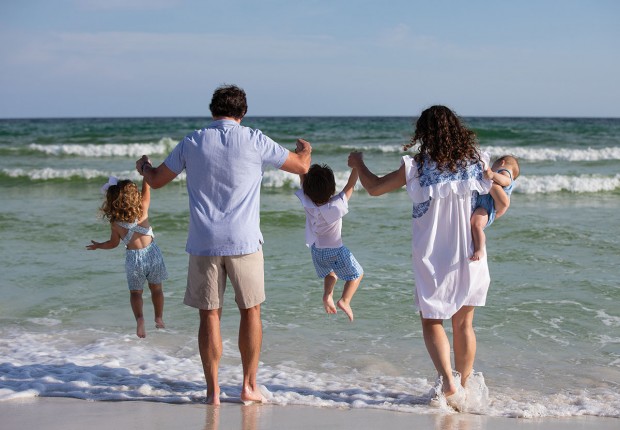 It is no easy feat to bring an infant or toddler to a beach. It takes planning and gear, and it is best to turn on the patience because most everything involving a beach and baby can take longer.

Parents Arleigh and Jay Herrington are experts. The sugary white sands of the northwest Florida coast are a second home to the Herrington family. Jay’s parents have a home in the small community of Watersound, which is near Rosemary Beach and Seaside off the popular Highway 30A. “Watersound has unique dune lakes and lengthy boardwalks that lead up the beach, which adds extra nature to explore,” said Arleigh. Arleigh and Jay married there five years ago, and now they have four children under the age of 4.

Their family enjoys taking their babies to the beach so much that they have taken the 10-hour drive to Watersound five times in the past 18 months. Pre-pandemic, Arleigh says their preferred method of travel was to fly into Panama City Beach. For now, they choose to drive straight though. One plus is it is easier to pack the gear.

This summer, they plan to again take their four children: Hank, 4, Hadley, 3, George, 19 months, and baby Finn, 4 months, to Watersound. “It is our happy place,” said Arleigh. “There are few things better in the world than soaking in a sun-kissed, salty-haired baby napping on your chest at the beach. The chunky baby thighs in a swimsuit are a bonus.”

Arleigh says one of her happiest times there was New Year’s Eve 2019. “We had just had George, our third baby, and we were spending the holidays at the beach with my husband’s family,” she said. “We put all seven cousins who are all under 7 in their matching Christmas [pajamas] and bundled them up with winter hats and went to the beach in the morning to play,” she said. “There is something about the holidays at the beach with family that is just so special.” 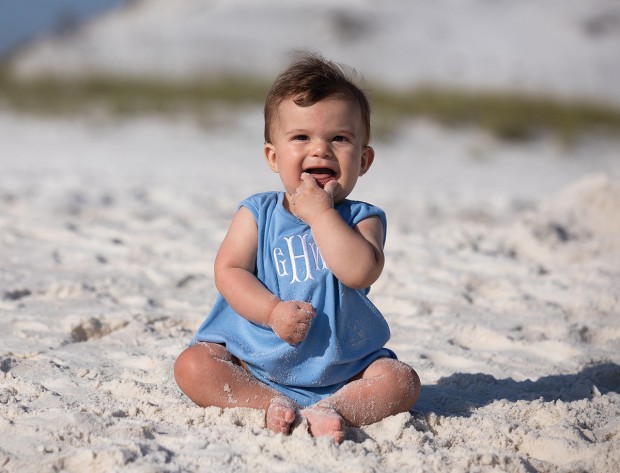 Arleigh says it takes them a long time to prepare to even walk out the door to head to the beach. They rise early, feed everyone breakfast, and start lathering them up with sunscreen. They pack their foldable beach wagon (Academy sells them) with ample snacks, toy shovels, and more. She said the sunscreen lathering up takes the longest, and so she rewards the kids with a treat if they stand still during the process.

The Herrington crew attempt to keep their normal nap and feeding and snack schedule, but they also try to be as flexible. “We often have a baby napping on a blanket under an umbrella or in a stroller, poolside,” she said. Arleigh says she highly recommends traveling with a wearable baby carrier to have free hands.

They keep their beach toys in a mesh bag which can, at the end of the day, be easily rinsed of sand with the toys in it. Also, with so many tiny ones in diapers, there is an important lesson she has learned. “Something that I didn’t realize as a new mom, which I wish someone would have told me, is not to change your baby into their swim diaper and swimsuit until you are at the pool or on the beach, “she said. “This may seem like more of a hassle, but those swim diapers only hold everything in in the water. It will keep the stroller dry.”

Jay, a commodities trader, says he loves to see their kids soaking up nature in a place he loves. “That is my favorite part – getting them away from the chaos and structure that comes with living in a densely populated city,” he said.

We polled a few more beach-loving Buzz parents on helpful gear. Whether you bring baby to Galveston or a plane ride to the Caribbean, they say to bring a pop-up, portable, baby tent for shade, waterproof shoes for toddlers like Natives or Crocs, a Summer Infant portable booster seat for mealtime on the beach, a floppy baby hat that offers sun protection, an inflatable baby float (with shade) for the water, and a mini handheld stroller fan with extra batteries.