Prom Fever Takes Over at BISH 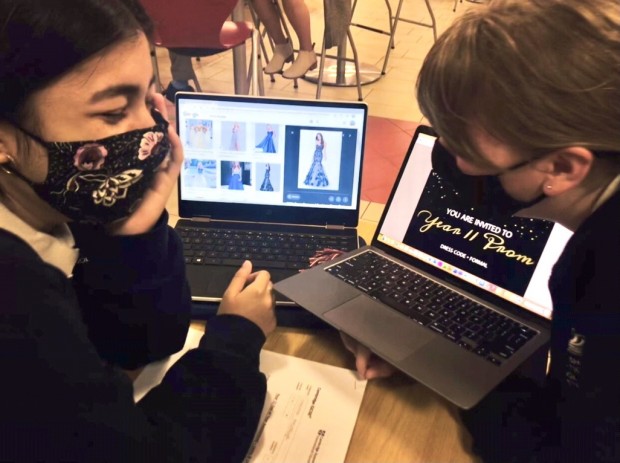 Year 11 students Sana M. and Christina M. are getting excited about prom.

Just a few weeks ago, the Year 11 students at BIS Houston were officially invited to celebrate the end of their exams in June at prom. Since then, there have been some unexpected events popping up. Just two weeks before the first exam was planned to go on, the tests at BIS Houston were cancelled, resulting in much confusion among students and faculty.

Within the whirlwind of explaining what can be used as evidence, what exams are carrying on, and what other exams students can submit, prom fell to the wayside. But before the worries of exams took over, prom was all anyone was talking about. Girls discussed what dresses they would wear and made idea boards while guys argued the benefits of a tux versus a suit and whether to pick a classic black jacket or a more colorful one.

As an international school, many students have not grown up knowing about the culture and tradition of an American high school prom. There was much confusion over who buys the corsage and boutonniere and how formal the words ‘formal dress’ on the invitation meant.

Students rushed to hand in the fee to the room parents who are in charge of organizing the prom. Every morning, more and more people came in carrying envelopes with the name of a room mom printed on the front.

For many, this will be one of the last moments they get to be together with their friends and make amazing memories. Going to an international school means lots of people move away because of their parents getting new job assignments.

Unfortunately, after Year 11 is when the majority of students leave. The main factor being many of the British students wanting to move back to their home country to do A Levels instead of the International Baccalaureate for the last two years of high school.

Of course, each student has different things they are excited for about prom.

“I am so glad that we are able to organize a prom this year. It’ll be a great opportunity to celebrate all of our hard work over the past two years and spend time with friends before they move," said Sana M. "Exams being cancelled now means that we are working harder than ever at school, so prom is a much-deserved reward at the end of it all.”

Some students like that the exams were cancelled, giving them more time to look forward to prom. Maia R. expressed her excitement now exams are cancelled. "I am looking forward to spending time with friends and the dresses and the dancing!”

10:00 am to 5:00 pm
Location:
Museum of Fine Arts Houston
END_OF_DOCUMENT_TOKEN_TO_BE_REPLACED