Remembering to look up at night 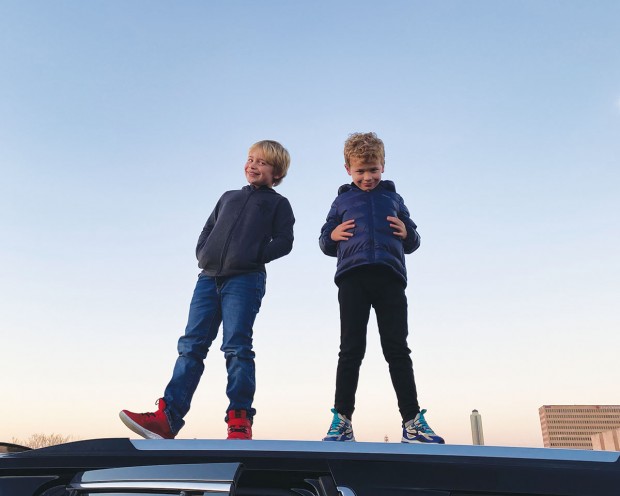 FULL NIGHT AHEAD Walker, 8, and Wesley Thomas, 6, met their grandparents on top of a parking garage to look for "the Christmas star" – when Saturn and Jupiter aligned to appear as a bright star.

Looking up into the sky at night, with a telescope or your naked eye, is a mind-expanding, mesmerizing experience, no matter what age you are, but especially when you live in “Space City.” We recently heard from Buzz families infatuated with astronomy, including one whose interest stretches across three generations.

From their Texas farm in Giddings to visiting Space Center Houston in Clear Lake, the Dorsey family loves learning about space, planets, NASA, rockets, and more. Grandfather-of-eight Tommy Dorsey says he does not want his grandchildren “to take NASA for granted.”

Tommy has made it a personal goal to teach his family just how important the National Aeronautics and Space Administration is, especially considering that the Houston-area Johnson Space Center serves as a hub of human spaceflight activity, home to the astronaut corps, the International Space Station mission operations, the Orion Program, and more.

He and family make regular visits to Space Center Houston, the non-profit official visitors center for Johnson Space Center, a science-education fantasyland where you can look at moon rocks, see rockets, and learn about space exploration. A highlight for kids is a first-hand look into the life of the astronauts living on the International Space Station – how they squeeze into tight quarters in the shuttle, how they eat their food, and use the bathroom.

“Having been around since the inception of NASA, I want to share with my grandchildren some of the excitement and wonder that was felt during all stages of the space program,” he said. His eight grandkids, who all live in Houston, range in age from 1 to 15.

Tommy’s son, Thomas Dorsey, says he has been fascinated by space since he was a child. He particularly enjoys stargazing out on his family farm in Giddings while he is hunting and fishing. He and the youngest Thomas (his son and Tommy’s grandson), who is 9, love to watch NASA rockets launch on television from Cape Canaveral, Florida. They always follow rocket-launch schedules and tune in on the television to watch them live. “They will be out and call and say, ‘Ok, we have to watch the rocket launch,’” said Kristin, young Thomas’ mom. Perhaps Thomas’ generation will be considered “the Mars generation” and be the first humans to land on the red planet.

Another Buzz family, the Thomas family, enjoy stargazing and planet-watching and are planning their first trip to the Space Center this summer. For now, one of their favorite experiences took place just before this past Christmas Day. The Thomas brothers, including Walker, 8, and Wesley, 6, met their grandparents on top of a Bellaire-area parking garage for a once-in-a-lifetime experience – seeing the “Christmas Star.”

The so-called Christmas Star was a planetary conjunction that occurred when Jupiter and Saturn aligned to appear as a bright, beaming star. It was the closest the two planets have appeared together in about 800 years, and it will not occur again until 2080. In the Christian religion, it has been interpreted as a possible source of the Star of Bethlehem.

“It was a fun memory, but most importantly for us, talking about the Christmas Star in Bethlehem and how the Wise Men followed it thousands of years ago,” said mom Julie Thomas.

The boys’ grandfather, Jerry Martin, and grandmother, Jeanne Martin, had the idea to meet their grandsons to see the star. “It was extra neat because we had not seen them as often due to Covid,” said Julie.

They selected the top of a parking garage to have a treeless view of the sky. They parked their cars and waited at dusk, and finally found the star in the southwest direction. The boys hopped on top of the car, and everyone watched with binoculars.

On June 24, you can see the year’s third supermoon, a moon that appears to be larger and up to 30 percent brighter than an ordinary full moon, especially when it starts to rise over the horizon. This full moon in June is traditionally called a Strawberry Moon.

The Thomas family plans to visit Telluride and will be there when it occurs, so they plan to sit out in the Colorado night together to catch a glimpse. Julie has an app on her phone called SkyView Lite, which allows them to point her phone to the sky to find stars and constellations.

Before that, in Houston, for the rest of you looking at the sky this month, there will be a solar eclipse June 10. See the Rice University eclipse website, and check out more astronomical events at inthesky.org.