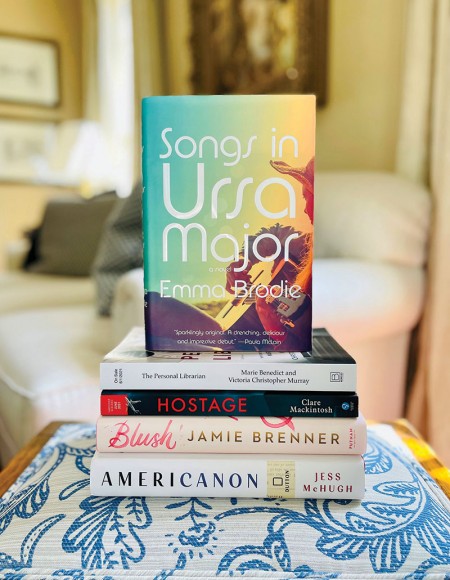 WHAT TO READ This month's picks include two works of historical fiction, a nonfiction examination of the books that shaped this country, a fun beach read, and an entertaining thriller.

Americanon: An Unexpected U.S. History in Thirteen Bestselling Books by Jess McHugh – McHugh traces the history of 13 nonfiction books that shaped the United States from the late 1700s to the late 1900s, including Webster’s Speller and Dictionary, The Old Farmer’s Almanac, Betty Crocker’s Picture Cook Book, Emily Post’s Etiquette in Society, in Business, in Politics, and at Home, and more. For each book, McHugh first details the book’s creation and purpose, including information about the author(s), and then moves on to the impact the book had and why. Throughout the early chapters, McHugh points out that in the 1700s and 1800s, most people owned only one or two books, which often granted those books outsized importance and influence, allowing them to substantially shape people’s views on various subjects. Americanon is a thought-provoking and fascinating deep dive into how these books helped shape a nation.

Blush by Jamie Brenner – Perfect for a beach vacation, Blush will appeal to book lovers everywhere, as the three Hollander women turn to books, specifically the “trashy” romance novels of the 1980s, to try and save their family vineyard and legacy. While very different, all three women, Vivien, Leah, and Sadie, bond over books written by Jackie Collins, Judith Krantz, and others, and find inspiration and ideas for moving forward as long-buried family secrets are exposed, and wounds from the past reappear. This highly entertaining book is a fun-filled and entertaining read.

Hostage by Clare Mackintosh –  Hostage is a timely and fast-paced thriller that kept me on the edge of my seat from beginning to end. Flight attendant Mina is working the inaugural flight from London to Sydney, the first time a commercial plane will fly that distance (20 hours) without stopping. Once in the air, she receives a threatening note advising her to help hijackers overtake the plane, or her husband and child will be killed. Told in many alternating viewpoints, including Mina, her husband Adam, and numerous passengers, Hostage is clever, thought-provoking, and full of fabulous twists and turns. Advice on reading this one – do not go on Goodreads and read the reviews because important parts of the story will be spoiled; it will be a much better read if you go in blind. I highly recommend this one.

The Personal Librarian by Marie Benedict and Victoria Christopher Murray – Belle da Costa Greene worked as J.P. Morgan’s personal librarian and curator of his private library housed in a townhouse off of East 36th Street before the collection became the Morgan Library and Museum. While she became an influential individual in the art world and one of the country’s most prominent librarians, she hid a devastating secret – she was a Black woman “passing” as a white woman and, moreover, was the daughter of the first Black graduate of Harvard. The Personal Librarian chronicles Belle’s life and legacy and what it was like to be torn between success and the desire to be herself. Benedict and Murray effectively evoke Belle’s constant struggle to straddle the two worlds she is caught between and the downhill trajectory of race relations during her life that further complicated her choices. All sorts of fascinating book-related information is woven seamlessly into the story, including details related to rare books, manuscripts, and incunabula (books printed before 1501) including the Gutenberg bibles, the first books printed in English and who printed them, and so much more. I loved this book so much and know it will be in my top 10 for the year.

Songs in Ursa Major by Emma Brodie – This beautifully written debut tells a fictionalized, loosely based version of the relationship between James Taylor and Joni Mitchell in the late 1960s. This coming-of-age tale follows Jane Quinn, a talented singer, as she rockets to stardom, encounters extreme sexism in the music industry, battles with wanting to stay true to herself and her music, whether to choose love or a career, the stigma of mental illness, and more. Brodie brings the music of the era to life and had me wishing I could actually listen to Jane’s music. Songs in Ursa Major is truly stunning and is my favorite book of the year so far.