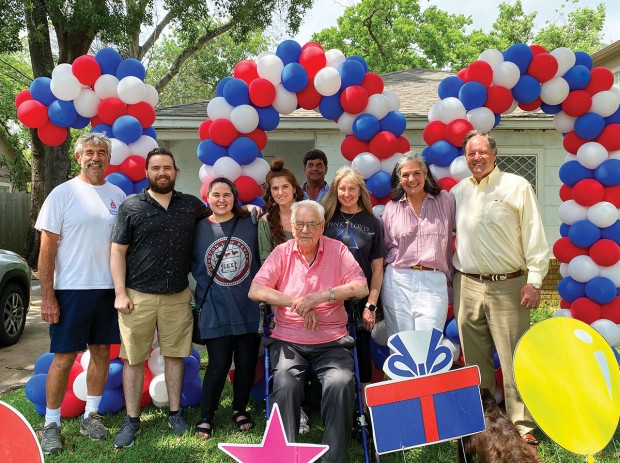 If you find yourself walking down Milton Street in West U, be sure to look for Victor Stanek’s big, bay windows and wave. He’s probably sitting just inside in his favorite chair, waiting to greet you.

Vic has lived at this same house, on this same street, for 69 years. He’s been in West U for 81 years, since he was 19. Did you do the math? Yes, Vic Stanek turned 100 this May. But don’t think Vic is known only as the 100-year-old man on the block. As a former owner of what used to be JMH Market on Rice and Edloe, he’s something of a West University icon.

Shirley Webb, Vic’s middle child and only daughter, a designer, told us about her dad. “He was born on a farm in Shiner, Texas, and he preferred fishing to going to school. His mother would always have to go to the creek and chase him to get him to school.”

“Oh, I hated school,” Vic says. “I only went through grade school. But I came out very well.”

Vic, who today looks more like 70 than 100, remembers bringing eggs from his family’s farm to the store in Moulton, Texas, where they would be sold. It was there that he heard about a grocery store in Houston that needed help. “Huffington [Joe M. Huffington, JMH’s namesake and original owner] was there to pick up the eggs,” Vic says. “I asked him for a job, and he hired me right away. I was 19. I jumped on the egg truck and came to Houston, to JMH. 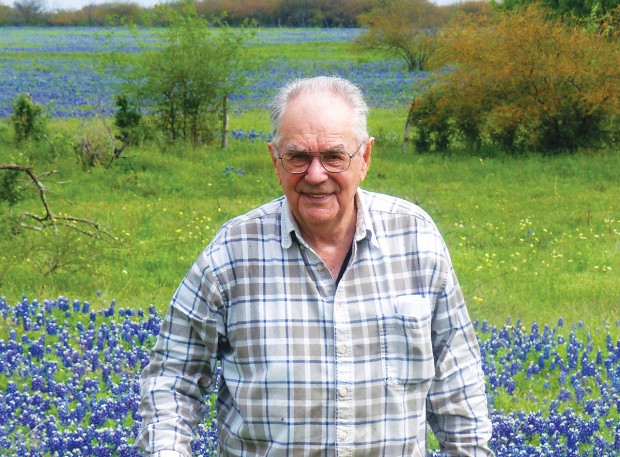 Vic Stanek among the bluebonnets at his farm in Sweet Home, Texas.

“I had no place to go and had about 50 cents in my pocket,” he says. “Huffington furnished room and board. He fed us above the store, and we lived behind it. Ten or 12 of us lived there, and after we got bigger, my wife and I lived above the store on College. That’s where Dennis was born.”

Dennis Stanek is Vic’s and his late wife Mary’s oldest son, a West U firefighter retired after 43 years, now a painter. “When we were kids, this was a real hometown environment,” Dennis says, sitting just inside his dad’s bay window. “On this block at one time, there were 31 kids.”

“We would take the wooden Coke bottle crates from the store, and we’d use them as bases and play kickball with all the kids on the block,” Shirley remembers.

Vic chimes in: “After that, it was older people like me, and now we’ve got nothing but young people.” 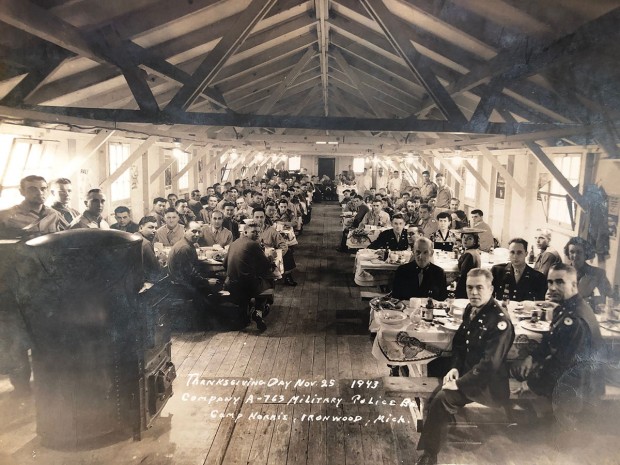 Vic and his company celebrate Thanksgiving at their post in Ironwood, Michigan, in 1943.

Joe Huffington put Vic through his paces at JMH. “I was a cleanup man and a stocker, and then a butcher’s helper,” Dennis says. “Then World War II came, and I was drafted into service. After basic training I went overseas to England, and we worked there supplying the underground. When we finished there, a group of us went to Italy, where we served for a few months, and then we were sent back to America on a boat. They didn’t need us anymore; the war was ending. So I came back to JMH.”

In 1950, Vic partnered with Joe Huffington and two others – Rudy Darilek and Jody Haas. At one time, the foursome owned five grocery stores in and near West U. “Every store, we built the building and owned the ground,” Vic says. “Every one was a separate corporation, and we called them 3, 5, 7, 9, and 11.

“When Huffington decided to retire, Rudy, Jody, and I had to sell the other stores to accumulate the money to buy him out. After that, we had a store on College [JMH No. 3, on the corner of College and Milton Streets] and one on Edloe, No. 5. I managed the College store, and after some years it got so old we decided to sell it, and the City of West U bought [in 1989] it for a park [Huffington Park]. I went to Rice and Edloe and managed that. After some years, all of us were about 85. We decided it was time to sell, and I’ve been retired ever since. 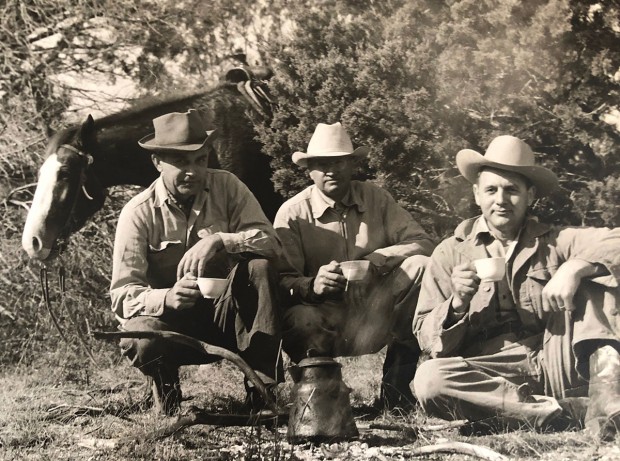 The local-celebrity status follows Vic’s family. “I go places, and people learn my maiden name, and they say, ‘Did your dad and mom own the grocery store?’” Shirley says. “It was great to have your dad own a grocery. Every time we walked in, we would go right up to the popsicle cooler, Dad would break a double popsicle in half for us. We have rotten teeth from all the candy.”

Mary Stanek, Vic’s very organized wife, kept track of all the charge accounts in the neighborhood, which were secured with a name, no signatures required. All three of the Stanek children – Dennis, Shirley, and John Stanek, who now cares for Vic – worked there.

“He put me through everything,” Dennis says. “I butchered, produced. I don’t know how it was for my brother and sister, but he was always tougher on me [than other employees]. Average was not good enough.” (Grandchildren were another story: Every day after school at West U Elementary, they would run to sit under the courtesy booth counter their grandmother manned and color until Dennis’ wife Kim picked them up.)

Neighborhood kids also worked at JMH. “Maybe 50 different school kids would alternate through,” Vic says. “We operated as a good will. A mother would come in and say, ‘Could you put my boy to work?’ We helped people.” Vic even kept a box of clip-on ties for the boys to use if they didn’t know how to tie their own.

He also sponsored Little League teams every year and, at one time, made sure that every Friday he had enough money to cash all of the city employees’ checks. “I had an agreement with Whitt Johnson [a longtime West U city manager and former mayor],” Vic says.

“Everybody that’s ever been involved with that store tells me Dad would help anybody, anytime, no matter what,” Dennis says.

“I have to give credit to Huffington,” Vic says. “If it wasn’t for room and board, I couldn’t have come here. He helped us.”

These days if Vic isn’t hanging out on Milton, he’s likely with his family at the farm he bought in Sweet Home, Texas. As for the store on Edloe, Number 5: “It’s a restaurant now,” Vic says. “Shirley took me there one time, and I looked around and said, ‘This used to be the warehouse.’”

If you’re at Tiny’s No. 5, or Milk and Cookies, or Texas Citizens Bank on Edloe and Rice, look up: the JMH sign and a whole lot of memories are still there. 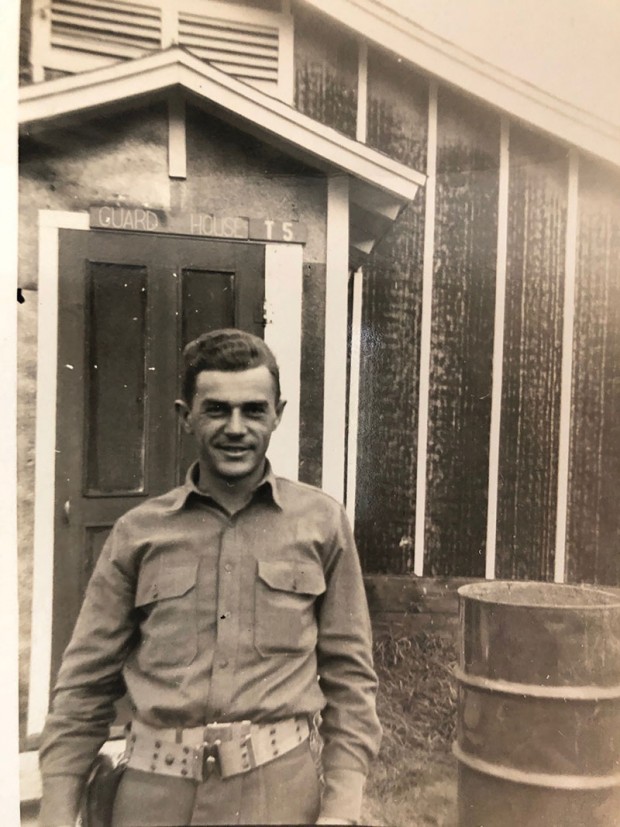 Vic Stanek in his military days. 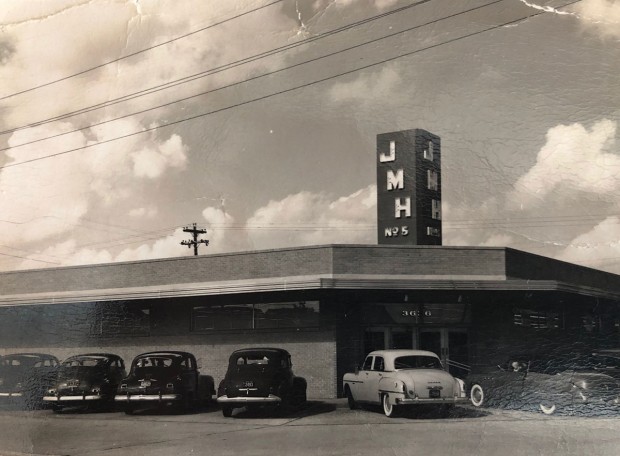 JMH No. 5 at Edloe and Rice in its early years. 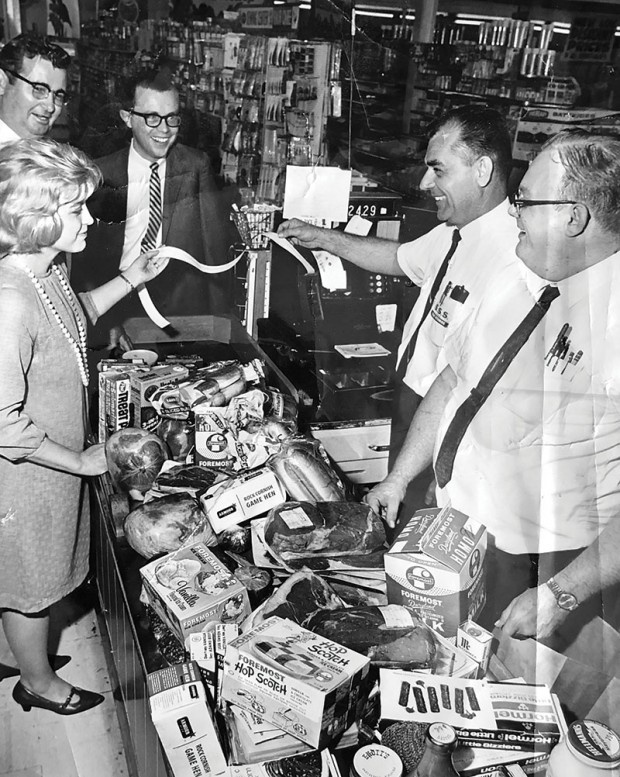 Vic Stanek helps customers during a raffle giveaway sometime in the 1950s.