From Bellaire to Burning Man 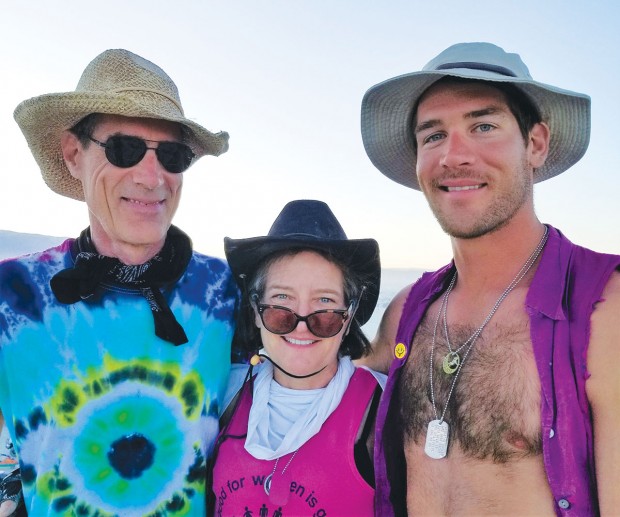 ART IN THE DESERT Paul and Frannie Robertson and son Stewart Robertson enjoy the Burning Man experience together. Older brother Alex hopes to join them one day.

If you passed by Atwell Street in Bellaire earlier this year, you may have spied the glimmer of a dazzling tree on the horizon of the quiet cul-de-sac. The tree was actually a metal sculpture, its trunk and branches lined with slowly transforming colored lights. Hundreds of diamond-shaped, shimmery leaves in a Crayola box array of colors dangled like crystals from a chandelier. The wind blowing, ever-so-slightly, rotated the baubles in ever-changing color patterns.

This one-of-a-kind tree was created by artist Paul Robertson, a retired geoscientist. The inspiration for his tree sculpture sprang from a dry desert 2,000 miles away.

In 2016, Paul's 24-year-old son, Stewart Robertson, had a memorable first-time experience at Burning Man, an annual nine-day gathering in the Nevada Black Rock Desert the week before Labor Day. Over 70,000 people from around the world gather to create a temporary, seven-square-mile city. The event gets its name from a large wooden sculpture of a man, which is built and then set on fire at the end, with everyone gathered to watch.

Veteran participants, known as “Burners,” say people need to experience it first-hand to grasp the communal interactive art, spontaneous music, singing, dancing, and creating. No money is exchanged. Participants bring their own food and water but also extra items to share.

“Stewart had a great experience and regaled us with stories of the wonderful art at Burning Man,” Paul said, smiling. “He continued to go every year and convinced my wife Frannie and I to make the trip in 2018."

Paul and Frannie were blown away by the fascinating people, fabulous costumes, the generosity, and, especially, all the interactive sculptures. Walking around the huge area on the flat, hot, and sandy playa to see everything that week – there are no motorized vehicles – gave Paul an interesting idea.

“The displays at Burning Man are spread out, sometimes over fairly long distances about a quarter mile or more,” said Paul. “On one occasion, walking between art pieces, I had the inspiration that it would be neat to have a place to stop, get a little shade and rest, and that was the birth of the art installation that we eventually built called The Oasis.”

The vision is for three conceptual iron sculpture trees, each a little differently designed but all featuring dangling, high-gloss colored leaves that shimmer in the sunlight and light up at night.

Paul submitted the concept to the Burning Man organizers, who approved the installation for the August/September 2020 event. The plan was to start working on three trees in January in Bellaire and have them all done by the end of July to transport to Nevada.

Although none of the Robertsons are artists by profession, they each contributed unique perspectives and valuable skills to the project. Paul had worked with metals and high-gloss car paint. Having experience with 3D CAD (computer-aided design software), Stewart  created the engineering schematics. He also assisted with welding, cutting, and initially assembling the piece. Even though Stewart’s older brother, Alex, lives in Boulder, he brainstormed concepts and problem-solved via phone. Frannie, a tech-industry alumna, acted as a sounding board and provided moral support. 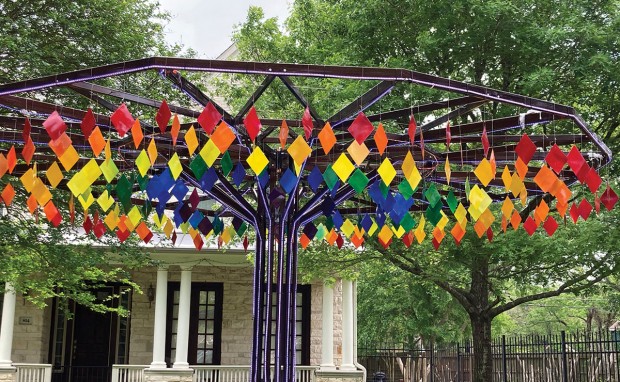 The Robertson family created the Oasis art tree together.

In addition to being drawn to art, the family is also passionate about cars. Over the years, Paul had taught Stewart and Alex how to repair and maintain cars, and he even tackled building a SuperLite Coupe race car with Stewart in their home garage. Paul's father and grandfather were both mechanically minded and taught him how to build and repair items, and Paul’s sons apparently inherited the Renaissance Man genes.

“Dad was always having us do DIY projects,” Alex said. “It helped that he was always encouraging – sometimes motivated us with Taco Bell.”

They started in January 2020. A few months later, Covid happened, and Burning Man 2020 was postponed. Paul and Stewart welded, cut and created the majority of the large iron elements of the tree by early summer and stored the parts in their home garage.

In December, Paul decided to let the Oasis see the light of day and assemble the tree in their front yard to decorate for the holidays. That would also give him the chance to figure out the best way to light the tree and individually create and hang the hundreds of diamond-shaped, hard-plastic, colored leaves.

The mesmerizing Oasis became a fan favorite in the neighborhood.

Soon, dog walkers, passersby, art enthusiasts, and a rapidly growing number of intrigued neighbors were discovering their own oasis with a one-of-a kind interactive tree sculpture gracing the green front yard of a two-story home in the middle of Bellaire. They stopped to talk to the man working on it. Paul decided to keep the tree up after the holidays.

“One of the real bright spots of putting the tree in our front yard is that I have really been able to meet a lot of our extended neighborhood, as the tree now seems to be a destination point for walking,” Paul said. “I have met other artists and people who have gone to Burning Man that live nearby. One night we had a little mini Burning Man get-together under the tree with some neighbors who also had built an art piece for Burning Man a number of years ago.”

“Paul was surprised when various folks asked about his art portfolio,” Frannie said. “He initially said he wasn't an artist, but now he more easily accepts the artist label.”

In January, Paul posted a video of the tree on social media and received a tremendous response. Andy Williamson, head of the Bellaire Culture and Arts Board, saw the video and invited Paul to display his tree as a temporary art installation in Loftin Park next to Bellaire City Hall, 7008 S. Rice Avenue, across the street from Condit Elementary.

Paul happily agreed. Alex came in from Colorado and helped with the task of disassembling the Oasis, transporting it to a new location to reassemble (each leaf had to be rehung), and making sure the lights worked with the new power source. Even though the move was less than a mile, the process took over a week.

The display, shining brightly in its new home, will be up and open to the public until the end of July. Since Burning Man 2021 has also been cancelled, the new goal for the Nevada-desert trip is 2022. The good news is that Paul and Team Robertson will have more time to work on all three Oasis trees.

“This is not something that I had ever envisioned doing, and yet now that I am going down this road, it's very exciting and has really energized both my family and I,” Paul said. “It is a great avenue for my sons, my wife, and I to have a common interest and a shared purpose. I think it is important for families to be able to have something in common that they enjoy doing together like travel, outdoor activities, hobbies, etc. Having taken the leap to build this piece of art has inspired both my sons and I to do other things as well. It also gives a sense of possibility, which changes your mind and gives one the idea they can do a lot more.”

Paul is currently working on the second tree in his home garage, larger than the first tree and more complicated, with a ladder. Burners will be able to climb to the top to sit and look out, and there will also be places to climb up the branches to sit under the canopy.

Paul is thrilled that the reaction he hears most often from people is that seeing the Oasis makes them feel happy. It has been an unexpected pleasure that the tree destined for Burning Man also has spread happiness in his own Texas home.

Connect with Burning Man fans, volunteers, and artists in Houston at regionals.burningman.org/regionals/north-america/houston/. Or see the Houston Burners Facebook page or Facebook group.

Paul, Frannie, and Stewart (from left) put in months of work and creativity to bring the Oasis to life.

Paul works in his garage workshop to build the pieces. 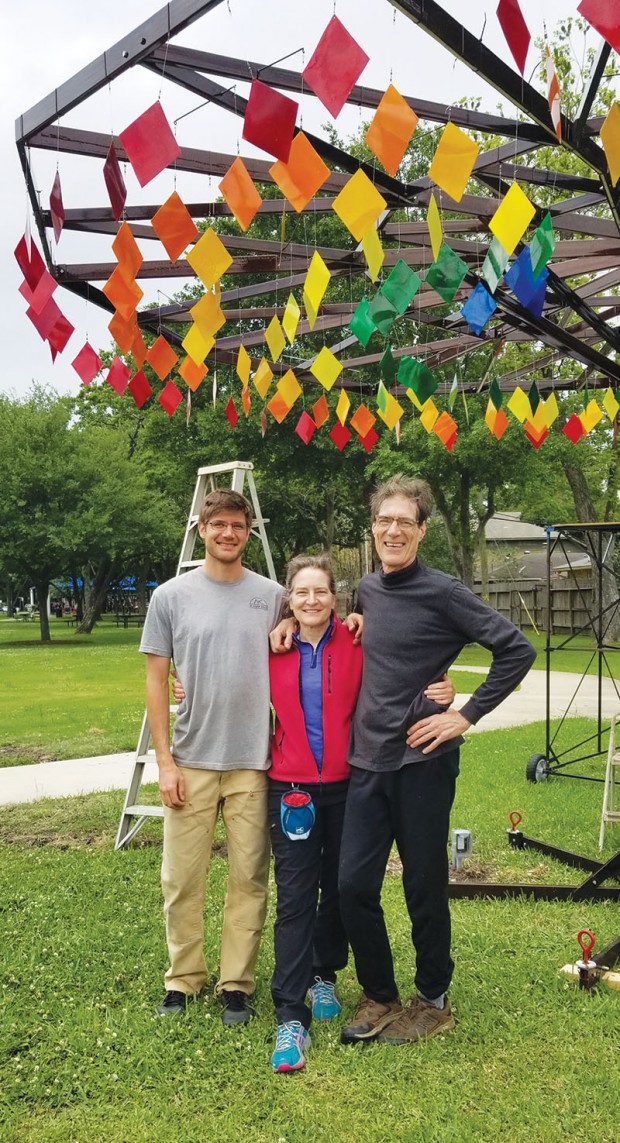 Alex, Frannie, and Paul (from left) helped set up the tree in its temporary home next to Bellaire City Hall.