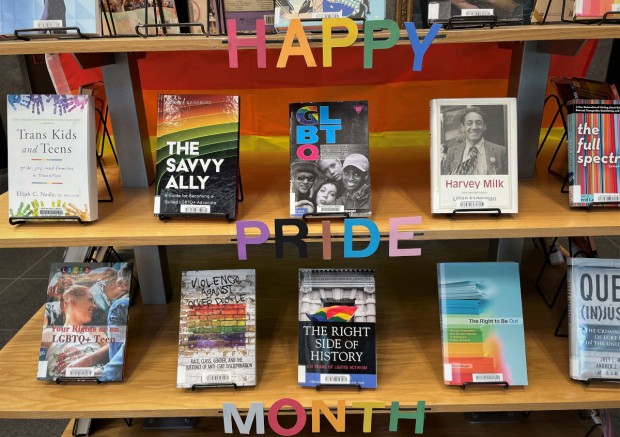 Since 1969, June has been designated as Pride Month, which celebrates and affirms the lives, identities, dignity, equality, and increased visibility of LGBTQIA individuals. In honor of Pride Month – and summer, which is a perfect time to catch up on reading - here is a great mix of fantasy, mystery and romance titles featuring LGBTQ authors, characters, and themes.

The House of the Cerulean Sea by TJ Klune: Linus Baker is a case manager with the Department in Charge of Magical Youth – so, basically, a magic social worker. He’s tasked by the powers that be in Very Upper Management to investigate a remote island orphanage with six charges and the devoted but somewhat mysterious caretaker Arthur Parnassus - some very odd children including a female gnome, a blob of uncertain species who aspires to be a bellhop, and a boy who turns into a dog when startled. But when this haven is put at risk by evil bureaucrats, Linus and Arthur are drawn together to protect them and right some serious wrongs. Published to rave reviews in 2020, this heartwarming and delightfully quirky tale was considered by many the “Best Book to Get Me Through the Pandemic’ and is a fantastic read for people who love stories of found families and scrappy underdogs with quirky characters and off-beat humor.

Lady Hotspur by Tessa Gratton: This epic fantasy novel is a gender-swapped adaptation of Shakespeare’s Henry IV aka the play with the famous “we few, we happy few, we band of brothers” monologue. In this tale full of court intrigue and political double dealing, three sisters battle it out for the crown and the reader follows along as the hard-living, hard-drinking womanizer Lady Hotspur becomes the respectable and principled heir to the throne she was meant to be. This is an ideal title for Game of Thrones fans, those who love strong female characters or those who are intrigued by the Shakespeare connection.

Firewatching by Russ Thomas: The British police procedural introduces the reader to Detective Sergeant Adam Tyler, an ambitious police officer in the cold case department - and who maaaybe has some resentment at the fact he’s languishing away there. His big chance to move up the ladder arrives when a skeleton of a wealthy financier missing for several years is found. But his possible career move is complicated by the fact that the number one suspect, the dead man’s son and heir, is also the handsome bloke Adam had a fling with a few nights ago. This mystery is compelling and oh-so-suspenseful with tons of well-developed characters. Adam is great - ambitious but principled, a bit of a loner but also aching to make a connection and relationship with fellow outsider Constable Amina Habib, who is Muslim. How they negotiate all the office politics, microaggressions, and outright bigotry in the community - and sadly also among their coworkers - gives the book a lot of depth. A definite must read for fans of Tana French’s Dublin Murder Squad or anything by Ann Cleeves. And if you enjoy it, rejoice! The sequel Nighthawking was published in February 2021.

Half Moon Street by Alex Reeve: This is another recent debut of note. History meets mystery in this whodunit set in the Victorian era that introduces us to Leo Stanhope: avid chess player; assistant to a London coroner; in love with Maria; and hiding a very big secret. For Leo was born Charlotte, the daughter of a respectable reverend. But knowing he was meant to be a man despite the evidence of his body and unable to cope with living a lie any longer, he fled his family home at just 15 and has been living as his true self ever since, his secret known to only a few trusted people. But when Maria is found dead, Leo is accused of her murder and stands to lose not just the woman he loves but his freedom and, ultimately, his life. This is a real corker of a read. Leo is a compelling amateur sleuth - intelligent, determined, a deep sense of right and wrong as well as of self all wrapped up in an atmospheric and intricately plotted story with tons of rich period detail. A great read for fans of Anne Perry or Charles Finch and, if you want more, you can read the continuation of Leo’s oh-so-atmospheric adventures in the sequel, The Anarchists Club, published June 2020.

The Jane Lawless series by Ellen Hart: This final mystery recommendation may be a better option if you have some serious summer vacation time planned. With 27 titles as of the 2020 publication of In a Midnight Wood, this long-running series will keep you busy all summer. Hart has won a ton of awards including six-time winner of the Lambda Literary award for best lesbian mystery novel, three-time winner for Minnesota Best Book Award for popular fiction and has been named a Grand Master of the genre by the Mystery Writers of America. Set in Minnesota, the protagonist is a restaurant owner slash private eye - over the series you get to see her grow in her confidence and further embrace her PI role as well as getting to know various family and friends. Series completists may want to start at the beginning with Hallowed Murder but you can also perhaps jump in with Taken by the Wind, which finds Jane investigating the disappearance of a young boy. Did he run away because his dads are going through a messy separation or is it something more sinister? The book was published in 2013 so, addition to the mystery and all the various personal relationships, there are a lot of great details about the post-Great Recession recovery and the impact on the town and families following the financial collapse. A good mix of long-term character history and short-term plotting make this a great standalone title even though it’s the 21st in the series. And if you like it, you can go back and read the others!

Boyfriend Material by Alexis Hall: Luc is famous against his will due to his rockstar father and his constant appearances in the tabloids. When this puts his career at a charity that is near and dear to his heart at risk, Luc must act. His solution? A respectable fake boyfriend to rehabilitate his image. Enter Oliver, a stuffy but oh-so-sexy barrister. He agrees to play pretend for Luc if Luc will join him at various social events including an anniversary party for his hyper-critical parents. And of course, fake dating leads to real feelings! Fake dating plus opposites attract plus I can promise at least one grand romantic gesture. It’s all you want in a romcom.

Something to Talk about by Meryl Wilsner: Jo Jones is a successful producer and writer who just landed the chance to head up a major action franchise. When she is photographed having a conversation with her assistant Emma Kaplan that looks more than mere business, speculation is rampant. The more they insist there’s nothing going on and stick to their “no comment” the more they wonder...could there be? This is a fabulous slow burn romance with complex characters - Jo started out as a child actress and worked hard to get where she is and break into the boys club. Fiercely private out of necessity, she is attracted to Emma and genuinely likes her as a person but is terrified of the implied power dynamic issue and her personal life becoming headline fodder. Then there’s Emma who is smart, ambitious with directing dreams of her own. She’s also hyperaware of the possible asterisk by her name if it’s perceived as if she’s using her connection to Jo to get ahead (and internally seething that no one would care nearly as much as if they weren’t two women.) This is a fantastic smart and sweet debut novel that makes great use of its Hollywood setting.

Still not enough books for your To Be Read pile? Ask a friendly librarian for help! Sign up for a custom book list and a library staff member will send you titles based on your likes and interests.