Diving into the 2020 Tokyo Summer Olympics 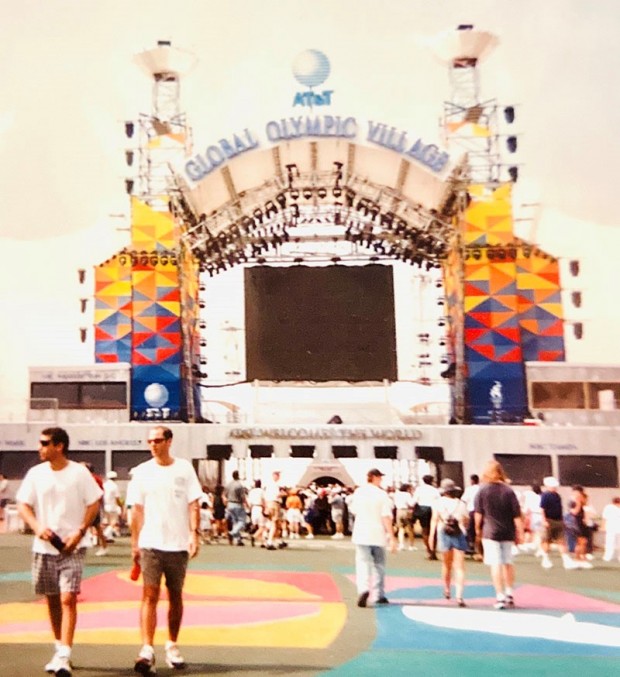 The Global Olympic Village where athletes lived during the 1996 Atlanta Olympics.

During the 1996 Atlanta Olympics, I worked in logistics for NBC Sports. One of my responsibilities was driving a 15-passenger van with the crew to and from the tennis venue located at Stone Mountain, about 30 minutes northeast of Atlanta. Passengers included the director, assistant director, and NBC sportscasters (and tennis legends) Bud Collins and Mary Carillo. I had never driven a van that big! Every morning I prayed that I would remember to take the right freeway. That year, Americans Andre Agassi and Lindsay Davenport both won the gold. It was a once-in-a-lifetime experience. 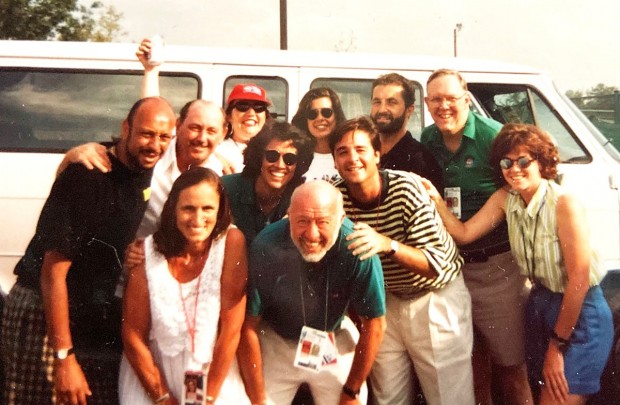 Fired up like the Olympic torch for the 2020 Tokyo games, these gold medal-worthy Buzz spectators shared some favorite Summer Olympic memories. 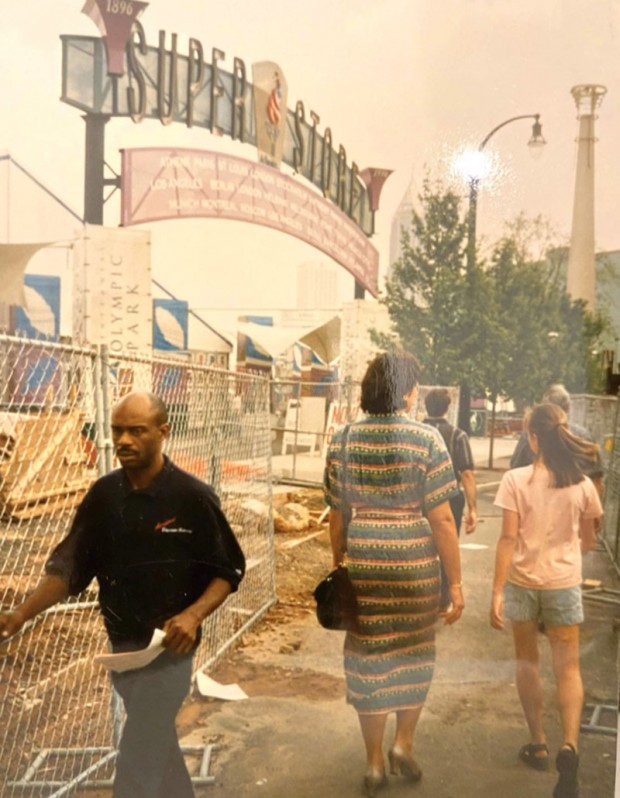 Audra Dezfulian and mom, Shirley Flanders Horn, walking past construction for the Centennial Olympic Park. Shirley saw the progress over the year because she often walked by on the way to her job at the Omni Hotel at CNN Center.

Audra Dezfulian and her mom, Shirley Flanders Horn, were living in Atlanta in 1990 the day the International Olympic Committee announced that Atlanta would be the host city for the 1996 Olympics.

Audra, 12 at the time, shared, "TVs were brought into our classrooms so we could watch the news. The teachers and students all started cheering and celebrating. Outside everyone started honking their horns! The whole town was so excited.”

Shirley was director of catering at the Omni Hotel in the CNN Center near Centennial Park and often saw VIPs like the USA Basketball team, which included Charles Barkley, Shaquille O’Neal, and Hakeem Olajuwon. 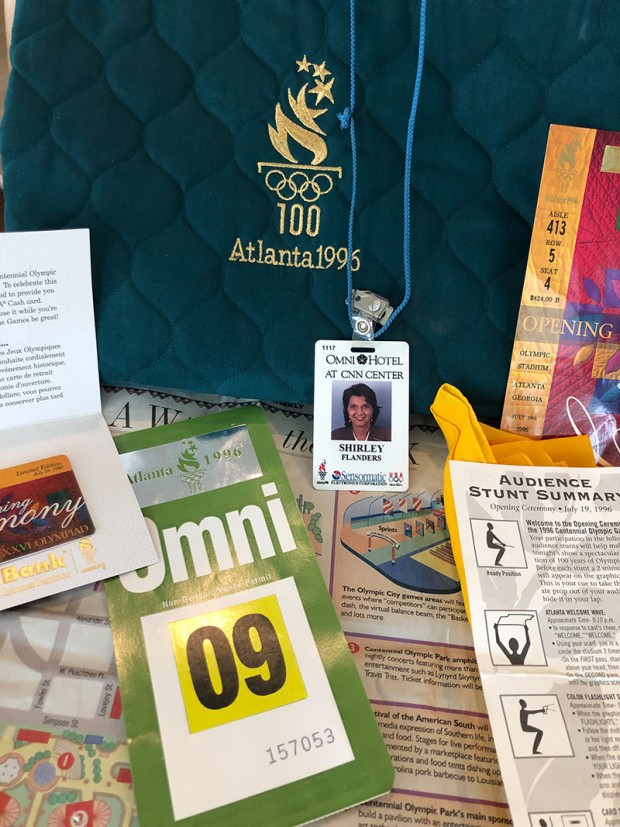 Some of Shirley Flanders Horn's 1996 Atlanta Olympics memorabilia including items from the Opening Ceremony when she sat next to Katie Couric.

A friend gave Shirley a ticket to the Opening Ceremony. “My seat was right next to Katie Couric. We said hello but then she was catching up with her kids on a cell phone, which was cutting edge at the time!” She remembers yellow scarves left on every seat; spectators had to wave the scarves during the ceremony. “They even made us have a practice!”

Audra and her dad attended a free Joan Osborne concert in Centennial Olympic Park. “We arrived four hours early so we could get ‘front row’ seats right behind the USA women's gymnastics team including Kerri Strug on her crutches. It really was a lot of fun to see so many people from all over the world in our city during that special time.”

Talia Nowitz Diamond was 23 when she traveled with her parents and two brothers to visit their cousin in Atlanta who recently had a baby. Talia said it was perfect timing - they had the opportunity to meet their new family member and her uncle got them tickets to see the track and field events plus Closing Ceremony. “Our family immigrated to Houston from South Africa in the late ’70s and we love the USA, but we wore South African colors and had South African flags. It was very exciting to see all the fans represent so many different countries!" 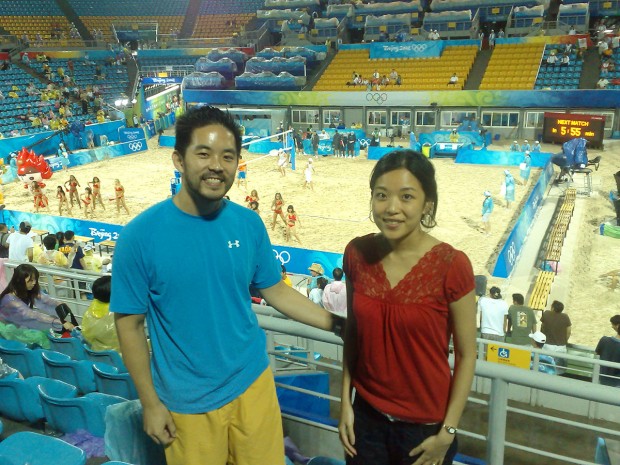 Patrick and Vicky Yip enjoyed watching the Men's Beach Volleyball. They were also very amused that there were cheerleaders for lots of different sports competitions.

Vicky Yip and her husband, Patrick, were living and working abroad during the 2008 Olympics in Beijing. “This was before we had kids, so we had the freedom to make the most of it!” Vicky shared. “We ran around the city with our international friends, cheering at sporting events, attending Olympic parties, and just enjoying the super festive atmosphere during those crazy couple of weeks.” 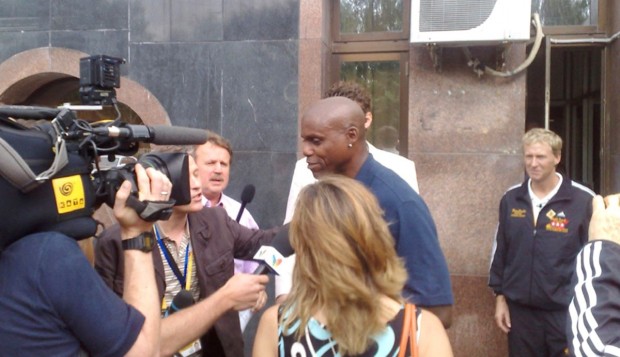 Carl Lewis being interviewed by some reporters in Beijing.

“We spotted American celebrities including Olympic figure skater Michelle Kwan and track star Carl Lewis,” Vicky dished. “Patrick even saw Vince Vaughn and Owen Wilson in the men’s room at a Budweiser Olympics party. We were so lucky to have been living in Beijing at that time to fully experience it all and have these fun and special memories.” 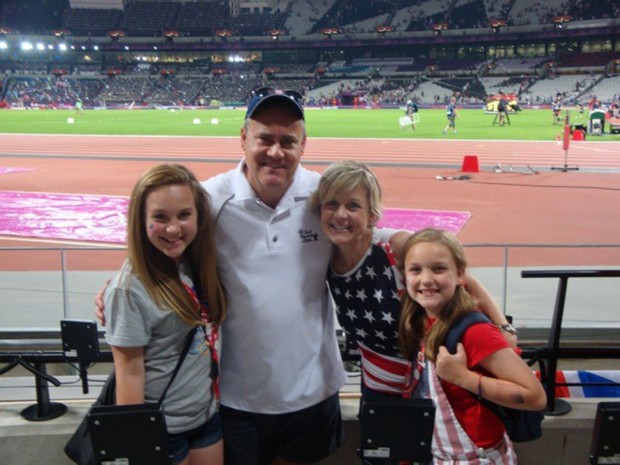 Kelsey, Steve, Heather, and Carly Johnson (from left) sporting their stars and stripes at track and field events during the 2012 London Olympics.

Heather and Steve Johnson and their daughters Kelsey and Carly, now 22 and 20, respectively, were living in London and fondly remember their Olympics experience. “The venues were all amazing,” Heather said. “It was exciting to cheer for both the UK and the US. The Brits obviously outnumbered most spectators, so we mainly dressed in American kit.” The family went to Men’s Basketball, Men’s and Women’s Beach Volleyball and Athletics.

“The energy in town was indescribable. So much patriotism, but also such a feeling of unity. As a spectator you proudly cheered for your home country, but there was never a sense of ‘us’ versus ‘them.’ There was nothing but admiration for those incredible athletes and what they represent. You couldn’t help but feel the pride for the winners, regardless of their home country. I think my eyes welled up at every national anthem played!” 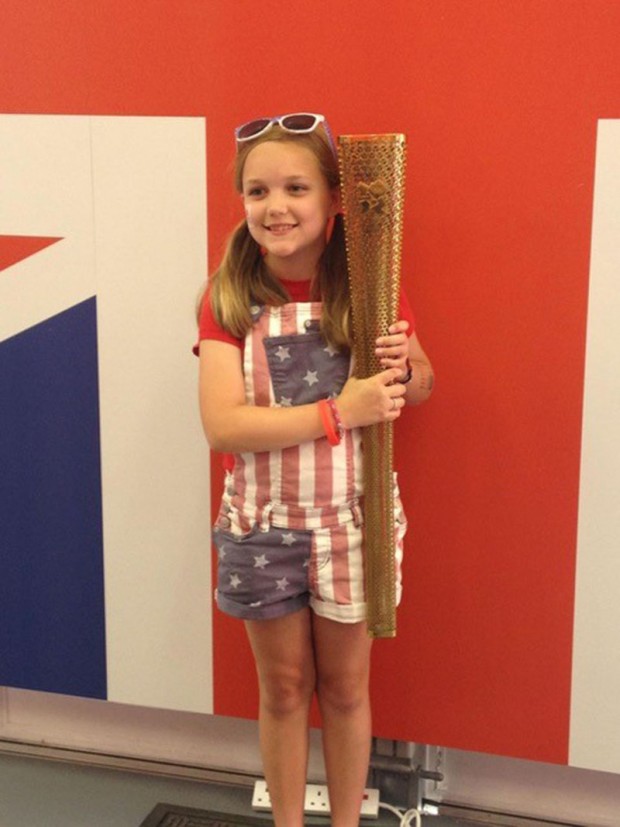 All decked out in her Team USA spirit wear (but also cheering for the UK because she lived there) Carly Johnson is all grins as she carefully holds the Olympic torch.

"It truly was a once-in-a-lifetime event and oh, how grateful our family is to have witnessed it firsthand!"

The 2020 Tokyo Olympics festivities will continue for 17 days through the Closing Ceremony on Sunday, Aug. 8. See the full schedule here. 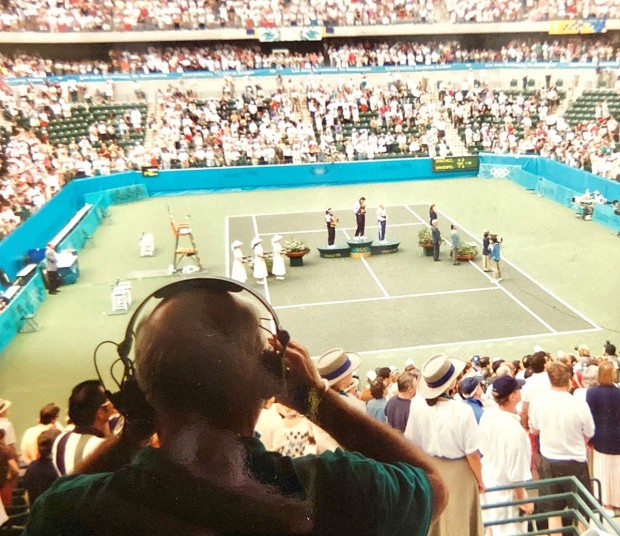 Sportscaster Bud Collins looking out from the NBC broadcast booth during the playing of the National Anthem when American tennis player Lindsay Davenport won the gold medal. The athletes, officials and audience were looking at the American flag during the song. 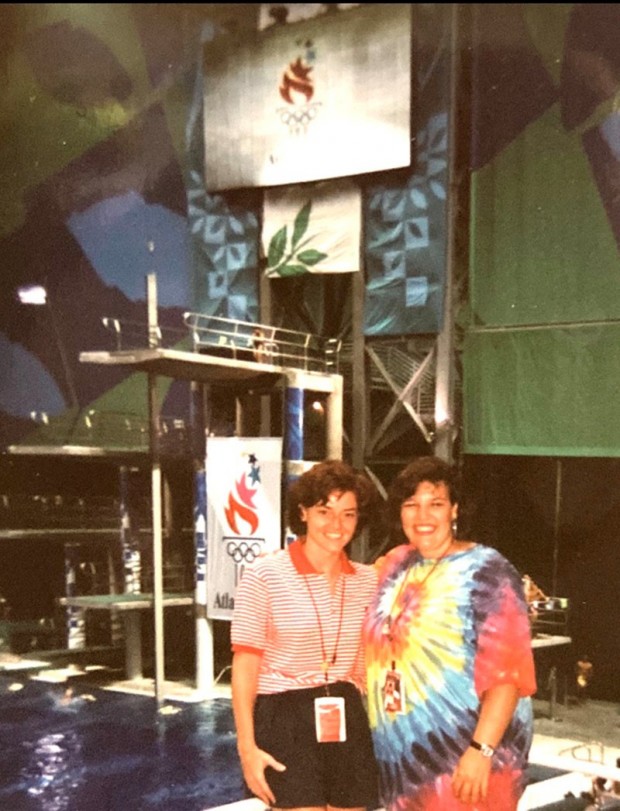 Debbie Edwards and Karen Vine Fuller in front of the diving boards at the Olympic Aquatic Center. 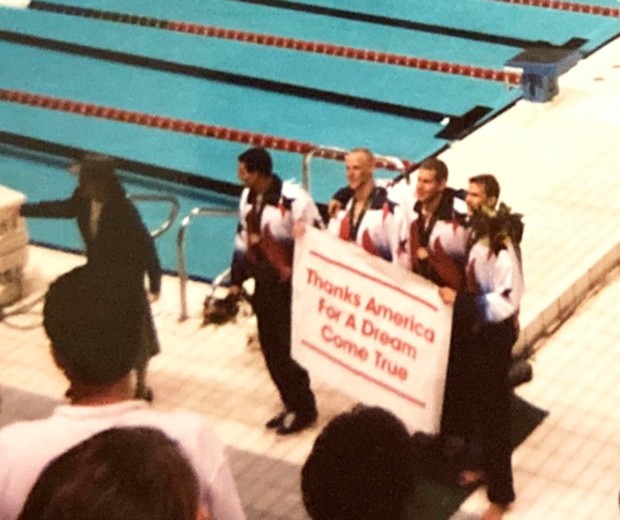 The U.S. Men's 400 medley relay team broke a world record to win the gold medal. After the medal ceremony, the four members of the relay team held up a banner that said, "Thanks, America for a dream come true!" The roaring audience included former President Jimmy Carter. 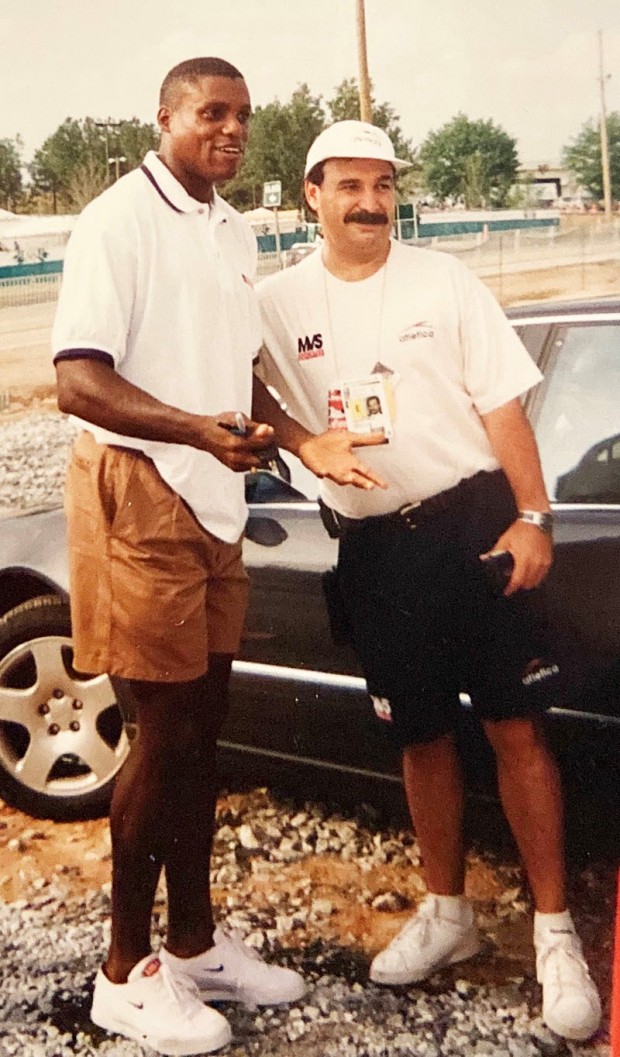 1996 Atlanta Olympics: Track and field legend Carl Lewis poses for a photo with a fan. Lewis is one of only four Olympic athletes to win 9 gold medals. He won his last gold medal during the Atlanta games. Lewis ran track for the University of Houston and is currently in his 8th season as an Assistant Coach for UH. 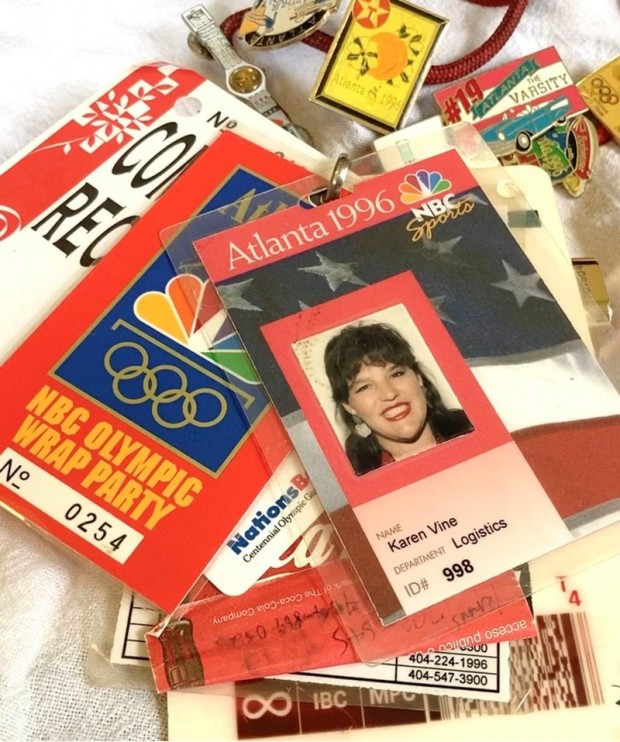 Karen Vine Fuller's Olympic credentials and some Olympic pins (including a Swatch one) on her lanyard. 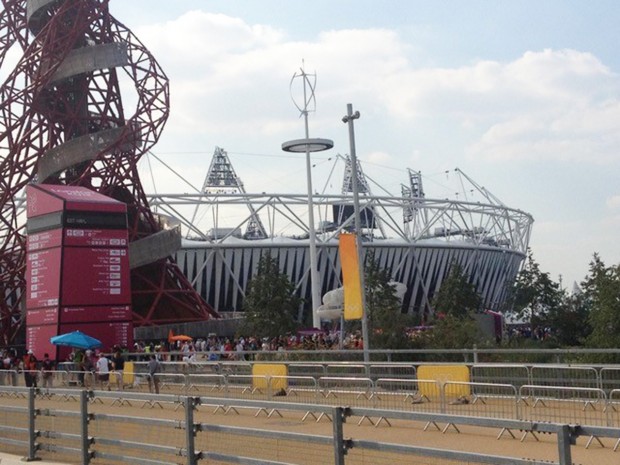 The Queen Elizabeth Olympic Park hosted both the 2012 London Olympics Opening and Closing Ceremonies as well as track and field athletics events. Eighty thousand workers helped to build the park. 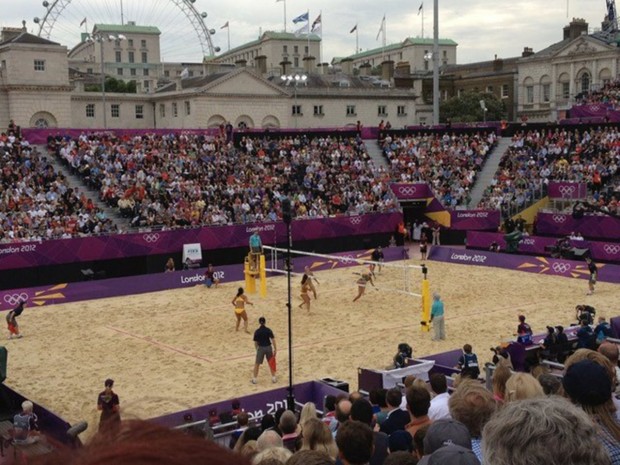 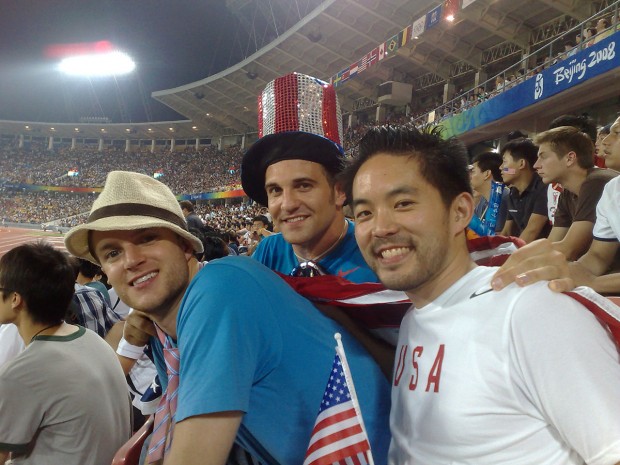 Patrick Yip and friends cheering on the US Women's Soccer team. 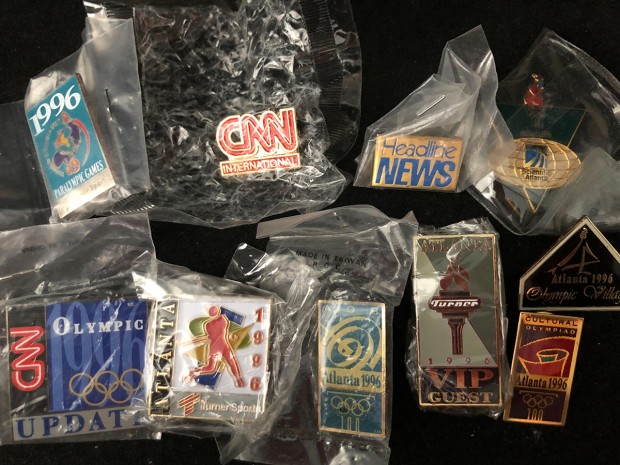 A collection of Olympic pins from the 1996 Atlanta Olympics. Shirley Flanders Horn and her daughter, Audra Dezfulian, who was 12 at the time, enjoyed collecting and trading Olympic pins. 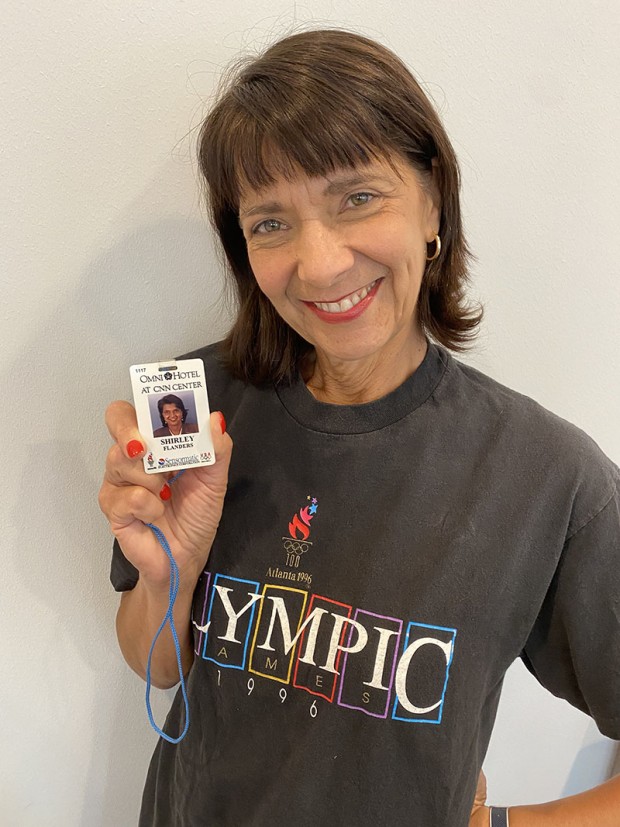 Shirley Flanders Horn still has her Olympics credential and lots of fond memories 25 years later. She said, "Living in Atlanta during those six years before the Olympics was magical. The whole town was so excited.”

Carl Lewis being interviewed by some reporters in Beijing. 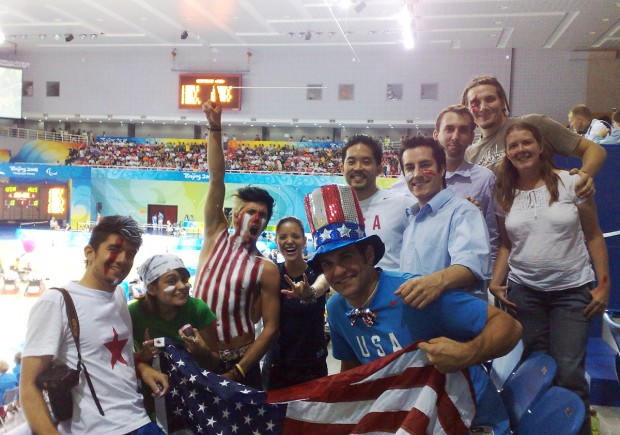 A spirited group of Patrick and Vicky's friends loved watching and cheering on the U.S. Wheelchair Rugby team in the Paralympic games and celebrating when the U.S. team won the gold. (Vicky's behind the camera in this photo.) 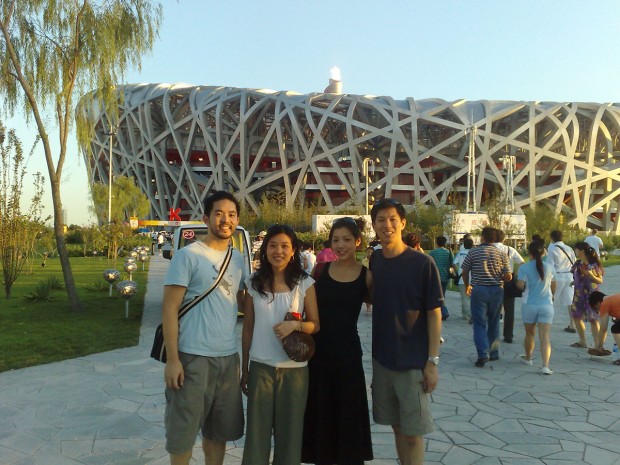 Patrick and Vicky Yip and friends Lynn Huang and Chris Luo pose in front of the Beijing National Stadium where the Opening and Closing Ceremony, as well as some sporting events, took place. The stadium was nicknamed the Bird's Nest. 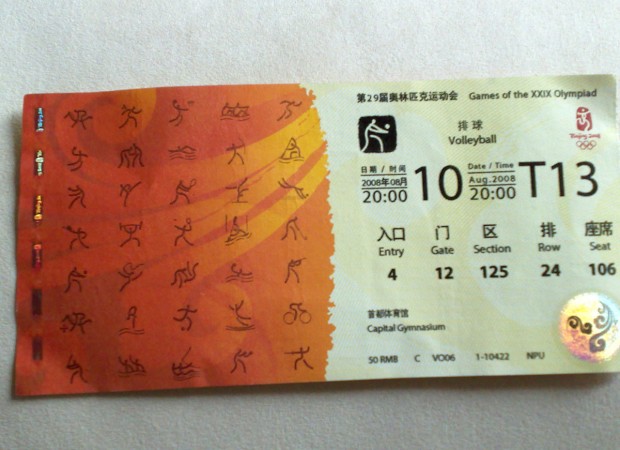 A 2008 Beijing Olympic ticket to Men's Volleyball between China and Bulgaria. Vicky shared, "We went to a lot of random events - whatever they could get our hands on! It was about $7 USD a ticket!"