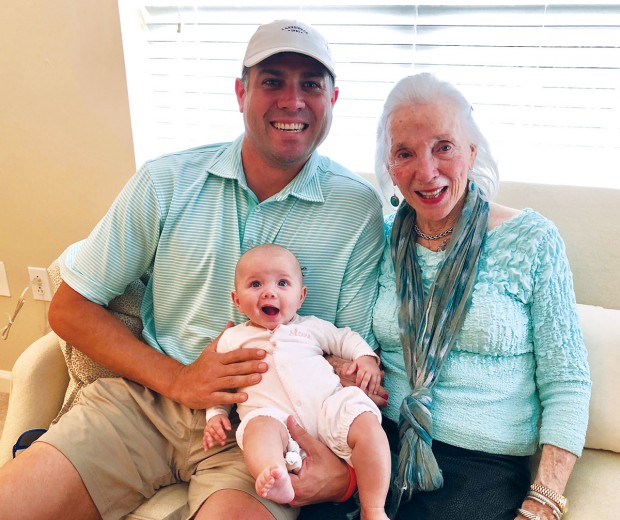 LOVIE In the summer of 2019, great-grandmother Lovie Sellers (here, with her grandson, Mark Burney) met her namesake, baby Lovie Burney.

Several years ago, engineer Sara Tomashitis and husband Beau, an operations manager, began thinking about having a second child. Their first child, daughter Margot, was 2 at the time. But their dreams of growing their family were put on hold when their lives changed in days.

Sara’s beloved father, George, died suddenly from a heart attack. Just 10 days later, Beau’s father, Bill, suffered from a seizure, which would later result in a brain-cancer diagnosis that would claim his life 20 months later.

However, amid this sadness, from the death of Sara’s father in January 2017 to the diagnosis of Beau’s father, Sara and Beau welcomed a healthy baby boy in March 2018.

William George (“Willie”) Tomashitis was born to their family between the two tragic losses, and to honor the two fathers, he was given their first names, William and George. The rest of the family was delighted at the news of the name.

Soon after he was born, they started calling him Willie, which was unexpected, but they say it stuck and captures his happy, outgoing personality. Willie is now 3, and he knows he is named after his two late grandfathers. Sara and Beau hope his name will help keep their legacies alive and that, as Willie grows, his names will be special to him.

Grandfather Bill, who had been an avid golfer and fisherman, was alive for about seven months after Willie was born, and so they were able to introduce Willie to Bill. Bill lived in South Carolina, and they visited him there.

Family namesakes are given to honor a family member or family friend, living or passed on, and the tradition is a longstanding one important in many families. Names may be passed on to honor family names or because an old family surname from centuries ago makes for a unique modern choice.

Mark Burney, who works in oil and gas, and his wife Kristen, a stay-at-home mom, strategically picked their three daughters’ first and middle names to honor family members both past and present. Mark says their family namesakes help keep loved ones’ memories and personalities with them.

The Burneys have three girls, Sellers, 6; Mae, 4; and Lovie, 2. Sellers, Mae, and Lovie are all important family names of loved ones in Kristen and Mark’s families.

Sellers, independent and determined, is named after Mark’s beloved mother, Kathy Sellers Burney, who passed away from cancer before Sellers was born. Sellers was Kathy’s maiden name, and it stuck as a nickname when she was in college and moved to Texas from Alabama.

Mark and Kristen decided a way to honor her was to give their first child the name Sellers. “We wanted to name her Sellers whether we had a boy or a girl,” said Mark. Sellers’s middle name is Kay, which is Kristen’s middle name.

Mark says Sellers, being the oldest of three, is nurturing to her younger sisters, following in the footsteps of her late grandmother and namesake.

Mae Brent Burney, their adventurous middle child, was named after another family member, her late Uncle Brent. “We lost [Brent] too soon, and we wanted to keep his memory alive through her,” said Kristen. “Mae is sweet, loving, and funny, just like her uncle.”

That is another wild thing about namesakes, especially in the case of Mae. Often, families say, they see character traits shared between the younger family member and loved one with whom they share the name.

The Burneys’ third child, and usually the “center of attention,” says Kristen, is named Lovie Lee after her now-92-year-old paternal great-great grandmother, Lovie Jean Sellers. Lovie is still living in Alabama. Lovie, or “Big Lovie” as the family affectionately calls her, and little Lovie have been able to spend time together when they visit Alabama. Lovie’s middle name, Lee, comes from Kristen’s dad, Travis Lee Bednarz.

As time passes and family trees are written down, namesakes can connect new and old branches and bridge the generations.