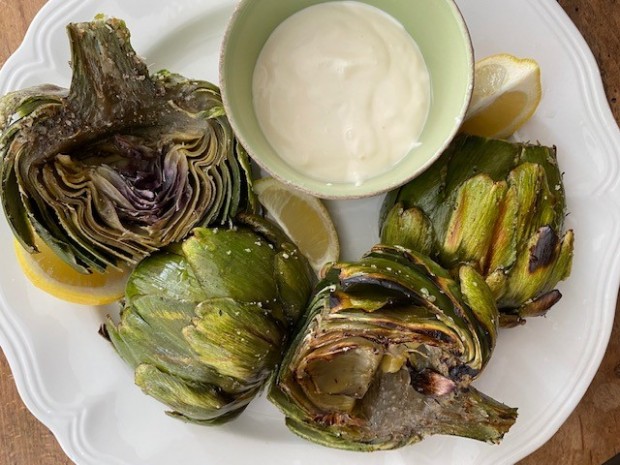 Whether or not your grill is already smoking, Grilled Artichokes should be in line to throw on it.

Grilled Artichokes are the first thing we ask for when we sit down to a table at Houston’s (now renamed Hillstone). We do this before we ask for drinks. If you’ve had them you know: they are that good.

But when we wondered why we couldn’t have them at home, we were pleasantly surprised. Grilled Artichokes are easy to make, especially if your grill is already going for something else. Just like throwing oysters into the oil you fry the turkey in at Thanksgiving (you do that, don’t you?), throwing artichokes on the grill you’re cooking the chicken on is a no-brainer.

The trickiest part of the whole thing is cutting out the fuzzy choke, but even that isn’t a big deal. Par-boiling them softens the leaves, and the grill makes them smoky. Add aioli, and you’ve got something like potato chips – you cannot eat just one.

Houston’s, we’ll be back. But we aren’t waiting for you to get our fix of Grilled Artichokes.

Bring a large pot of water to a boil, and preheat the grill.

While the artichokes grill, make the aioli. In a small bowl, whisk together the mayonnaise, garlic clove, and lemon juice.

Transfer the artichokes to a platter. Serve with lemon wedges and aioli alongside.