Hooked on the Bayou City 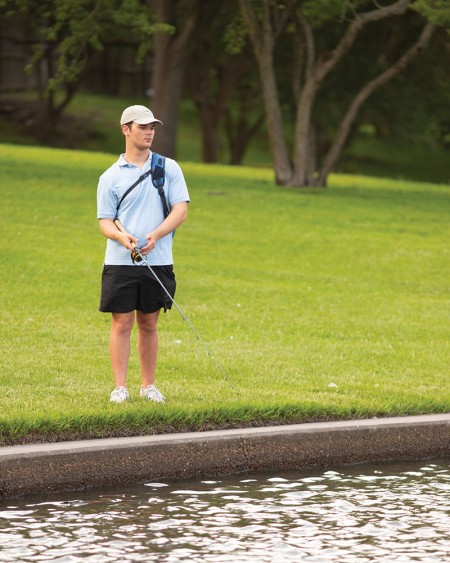 ON THE BAYOUS Frank Diamond is in his natural element while fishing in Houston’s bayous: a favorite hobby for the past 15 years. Here, he is by a pond on Meyer Park and Meyer Forest Drive. (Photo: Dylan Aguilar)

From that moment on, to Frank, every puddle in the Bayou City held great potential.

“After that day, he would sit in his car seat and look for bodies of water as we drove around Houston, asking, ‘Are there fish in that water?’” says his mother, Laura Diamond. “I would take him to Hermann Park to fish … and Galveston on occasion. Meanwhile, while other kids his age were watching Sesame Street, he would sit quietly and watch fishing tournaments on ESPN or the Deadliest Catch.

“Shortly after the renovated Buffalo Bayou park opened, I had been down there walking and thought to come back with Frank and his pole. He had a lot of luck bringing up giant gar and catfish, once even a redfish, downtown near Allen's Landing. I was always nearby. Once he turned 16, he would study aerial maps using Google, and as long as he was with a friend, we would allow him considerable range around the city's bayous.”

Now, Frank has graduated from high school and is about to head off to Louisiana State University, where he was accepted to the College of Coast & Environment. Over the years, he has found a lot of fish in a sprawling, urban, concrete jungle of a city that others might not realize holds opportunities for anglers.

“People are still surprised when they see photos of fish I’ve caught and say they didn’t know there were fish in the bayous,” says Frank. “I want everyone to know that, yes, there are fish in there!”

A walking encyclopedia of Houston fishing, Frank has caught and released all types of fish around town, including eels, carp, panfish, channel, blue, yellow bullhead, armored catfish, alligator gar, and even some saltwater fish out of the bayous.

“I like that I can, in town, start fishing in just 15 minutes versus an hour or so in traffic to get to the Gulf, having a good idea of what sort of fishing conditions and weather you will be dealing with,” says Frank. “Sometimes by the time drivers arrive at the ocean, conditions can be windy or choppy water, that make it not such a great day to fish.”

Frank thinks everyone should try fishing. “It gets people outside to enjoy nature. There can be some good people watching, and it makes a great hobby. When my friends and I get bored of watching TV, we have fun just hanging out and fishing.

“Sometimes when I am walking through areas with trees, I feel like I’m going into the woods. I’ll often see small animals like rabbits and bullfrogs that make me forget I am in the middle of a big city. I like when it’s quiet and peaceful. I’ve even had a yellow crowned night heron come sit by me. I tossed him a few small fish.”

Laura gets a lot of pleasure out of seeing her son doing what he loves. “It may sound corny, but to me, one of my greatest accomplishments as a parent was introducing him to his passion. A lot of people go through life without an outlet for frustration or a source of joy. Fishing is both of those for Frank. He's been fishing in the Florida Keys, Venice [Louisiana], Costa Rica, Mexico, all over the world, but to get his 'fix' between trips, he was always back at the bayous with his baggies full of homemade bait.” 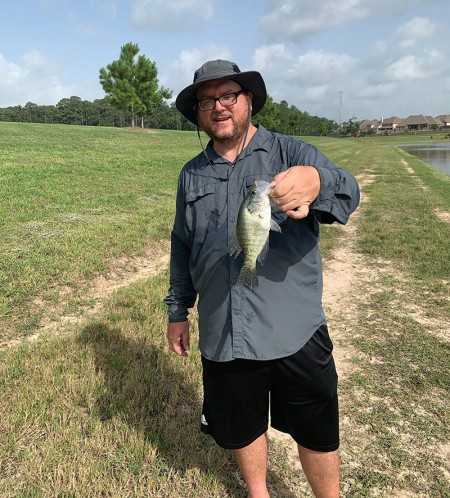 His dad had taken him fishing when he was a kid, but he had never done any serious fishing as an adult. David recruited a buddy, and, these days, they love to cast a line in local spots like Kickerillo-Mischer Preserve out 249, Cypress Park on Eldridge Parkway, Tom Bass Regional Park off 288, Bane Park off 290, and Sheldon Lake State Park, northeast at Highway 90 and Beltway 8. They also experiment with lesser known Houston fishing spots, including lakes, creeks, and flood-control detention ponds, or wherever they can find water.

“It turns out there are tons of places all over town that are full of fish,” David says. “In fact, I have found that if you can see water from the street, there is a pretty good chance fish are in it.  We have caught green sunfish, Rio Grande cichlids, white crappie, tons of bass, and some good size [26-inch] channel catfish.”

David doesn't keep any of the fish to eat because officials advise against it, due to chemicals from the ports that seep into waterways. He just takes a picture and gets them back in the water as quickly as he can.

"I am not going to give away any of my good spots,” David says. “But there are fish everywhere. I even caught a little spotted bass in a ditch behind a barbecue restaurant one time, just because the water looked deep enough for fish to be in there.

"Not all of the fish are big, but that doesn’t matter too much to me,” David says. "If I use lightweight enough gear, a small fish can feel pretty big when I catch it. If I hold it right when I take a picture, nobody knows how small it is anyway!”

David carries a pole, plastic worms, and sometimes stale hot dog buns (catfish love them) in his car in case he decides to try his luck when he's running errands. "One of my favorite spots is on the way to the hardware store. I can stop, throw in a few times, then be back in the car to buy a box of screws in 15 minutes, usually having caught something. And if my kids are with me, they can try, too.”

As someone who loves fishing but does not need all the bells and whistles, David puts his experience in perspective: “Fishing in Houston isn’t as glamorous as catching bull redfish down in the Gulf or trophy bass on a boat in a big lake. But as far as I’m concerned, catching five fish in a half-hour and walking home in time for lunch can’t be beat – and those places are all around."

A few places to start

Here are a few of Frank and David’s favorite fishing holes, at least the ones they would reveal. These locations are easy to find and have available parking.

Remember to follow local rules, and that most people over 17 (with some exceptions) need a fishing license; see tpwd.texas.gov. 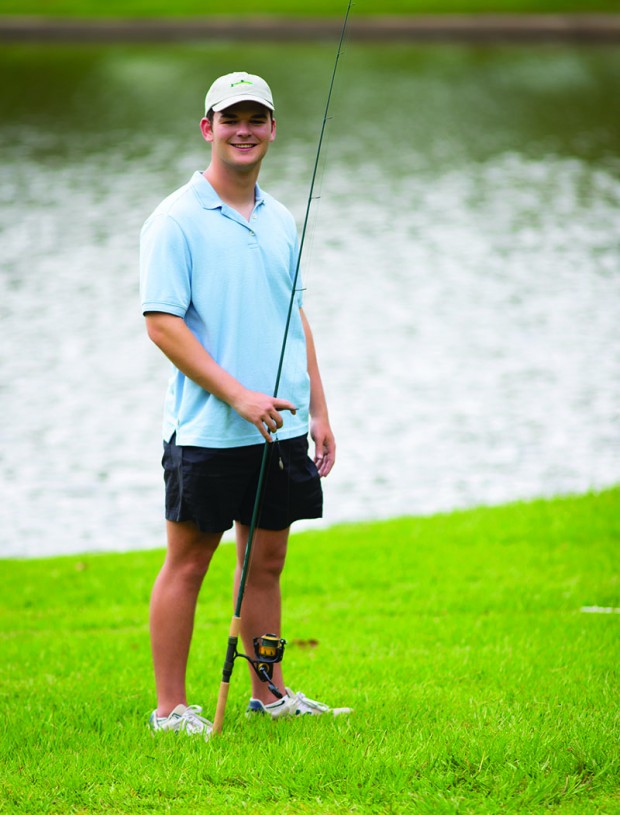 Frank Diamond loves fishing in Houston and telling others that, yes, there really are fish in the bayous. (Photo: Dylan Aguilar) 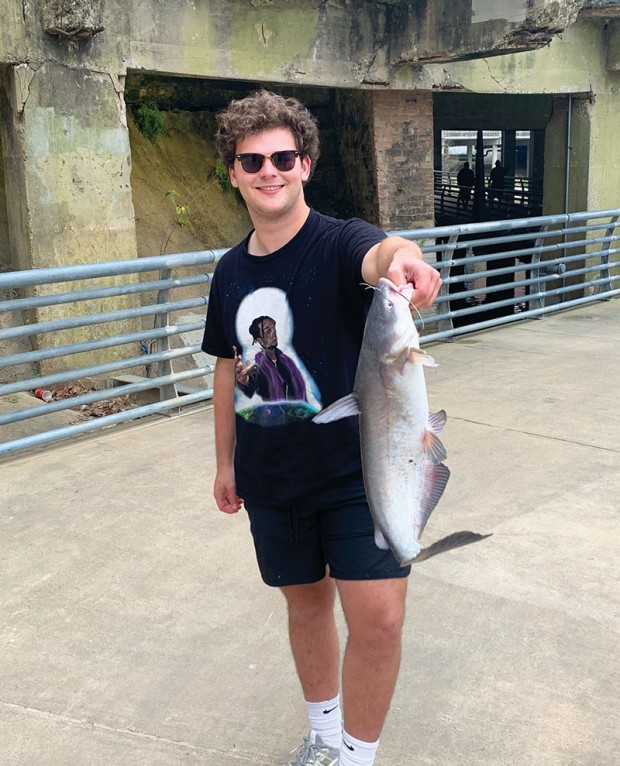 Frank Diamond lands a catfish under Louisiana Street as it goes over the Buffalo Bayou. 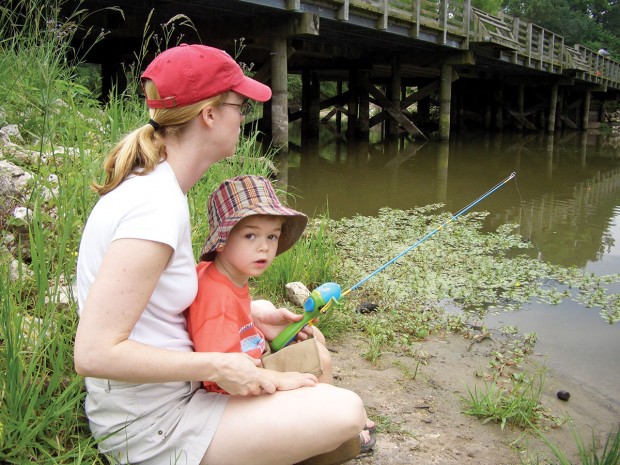 Hooked from the very beginning, 3-year-old Frank enjoys his first fishing trip at Lake Houston with his mom, Laura Diamond.