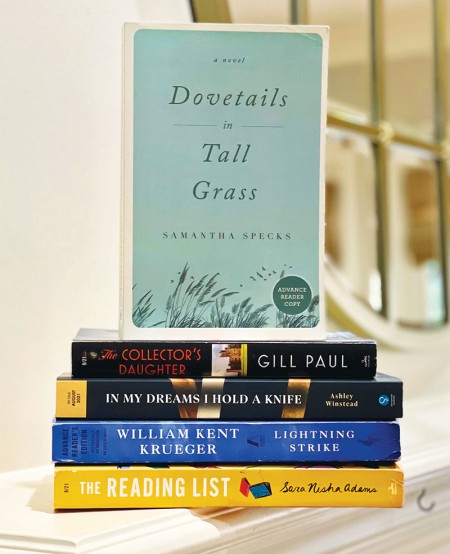 WHAT TO READ This month's picks include two books by Houston authors, historical fiction about the discovery of King Tut's tomb, a prequel to a popular series, and a story about the importance of reading and community.

The Collector’s Daughter by Gill Paul – Inspired by actual events, this historical-fiction novel follows Lady Evelyn Herbert, daughter of the Earl of Carnarvon, the only female present at the opening of Pharaoh Tutankhamun’s tomb in 1922 and the first person to enter the tomb in over 3,000 years. Fifty years later, an Egyptian academic shows up with an agenda of her own to interview Lady Herbert about what really happened when the tomb was discovered. Paul wraps in a mysterious curse surrounding King Tut’s tomb and the issue of who should own the artifacts that are discovered while vividly recreating 1920s Egypt and placing the story in its historical context. I raced through this compelling novel.

Dovetails in Tall Grass by Samantha Specks – Dovetails in Tall Grass brings to life events that led up to the U.S.-Dakota War of 1862 in Minnesota through the eyes of two young women, one a settler and the other a Dakota Sioux. Houstonian Samantha Speck’s meticulously researched and vividly depicted historical-fiction tale follows one brutal instance in the disintegration of U.S./Native American relations that played out across North America as whites displaced indigenous people, moving native populations to reservations and continually breaking promises made to them. The story slowly builds to a sad and inevitable conclusion that pays homage to those who needlessly lost their lives. The book kept me on the edge of my seat until I turned the last page.

In My Dreams I Hold a Knife by Ashley Winstead – This dual-timeline psychological thriller toggles between present day and 10 years prior when a woman was murdered in her dorm room, a crime that remains unsolved. The murder broke apart a close group of friends, and, in the present day, the individuals are returning to campus for the first time since graduation. But while some people are happy to leave the past behind, someone else wants to catch the killer. This page turner by Houstonian Ashley Winstead kept me up late into the night, madly reading to get to the end.

Lightning Strike by William Kent Krueger – In this prequel to his popular Cork O’Connor series, William Kent Krueger takes the reader back to 1963 when Cork is just 12 and the world is on the brink of a new era. In Aurora, Minnesota, on the edge of Iron Lake, a local man is found hanging from a tree, and at first the case appears to be a suicide. However, certain facts about his death do not add up, and Cork’s father, the town’s sheriff, opens an investigation. As his father works to resolve the inconsistencies, Cork and his friends become informally immersed in the case and work to discover what really happened. For those that have not read this series yet and do not want to go back and read the earlier books, Lightning Strike is a great place to jump into an entertaining and unique mystery series.

The Reading List by Sara Nisha Adams – In this beautiful tribute to books and libraries, The Reading List tells the story of Aleisha, a teenager with a troubled home situation who decides to work in the library for the summer to escape her home life. While working, she stumbles across a list of eight books with the words “In case you need it” at the top. Curious, she begins to work her way through the list, becoming engrossed in each book and its characters, and finds that each book helps transport her to another place and away from her own personal issues. Along the way, she recommends each book to a librarian patron she meets named Mukesh, a lonely widower trying to fill his days. As the two read and discuss the books, they develop a sweet friendship that helps them both through trying times. While parts of the book are incredibly sad, I absolutely love The Reading List and its focus on the incredible power of books and community.