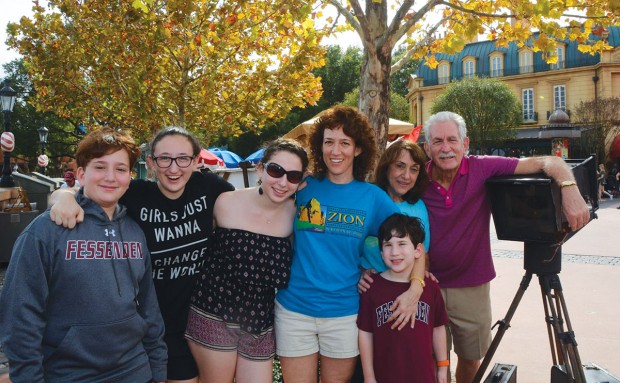 Michael Glazer, Sophia Glazer, Elizabeth Glazer, Liane Clamen, David Glazer, Rhoda Clamen, and Allen Clamen are especially close, and the grandchildren – inspired by the relationships and their grandmother's poems – write poetry for and about their grandparents. Here, they all travel together to Epcot.

Rhoda Clamen, who is the subject of many poems written by her grandchildren, used to work with blind infants at Helen Keller Services in Brooklyn. Years and a couple of moves later, she is a volunteer panel chair for the Independent Police Oversight Board for the City of Houston, appointed by Mayor Sylvester Turner; she and other panel members oversee cases where excessive force and other issues are in question.

As busy as Rhoda has always been, she has never failed to take time to write to her children and grandchildren.

“I have always sent my children poems, never a card,” she says. “I will think of something to say and put it into poetry.” She mostly waxes poetic on birthdays. “This last time, I made a train for Liane because she started a new ocular lens business. It said, ‘I think I can, I think I can,’ and I wrote on each caboose what she has accomplished.”

Liane Clamen is Rhoda’s ophthalmologist daughter in Boston. And Rhoda’s poems are one of the things that sparked her four grandchildren, Liane’s children, to write their own poems about their grandmother.

Rhoda and her husband Allen, a chemical engineer with Exxon, also have a son, Bradley Clamen, who lives in Houston.

Their grandchildren, all Bostonians, are Sophia Glazer, 21, Elizabeth Glazer, 18, Michael Glazer, 16, and David Glazer, 11. Each of them has written about their grandparents.

Recently, that poetry was especially poignant because it addressed a sadness many were feeling – the togetherness grandchildren and grandparents were missing during quarantine. Elizabeth tackled the subject head-on in a poem she wrote for her senior English class and then shared with her Grandma Rhoda.

That’s all it takes”

Her pink oven mitts, stained from years of use, protect her dark wrinkled hands from the hiss of the oven’s fire

Since I was a child, I watched in awe as she sprinkled salt and pepper into her pot of meatballs

Fried her chicken until it was crispy and tender

Braided her challah and let it rise to double its size

The smells filled the whole house, making my stomach gurgle and saliva spill from my mouth

I have tried to replicate the recipes, but they are never the same

In Texas, she tosses spices into her pan and flips the perfectly browned meat

She sits across from my grandfather at the table

Her grandchildren thousands of miles away, still smell the potatoes frying, the chicken sizzling, and the blueberry pie bubbling 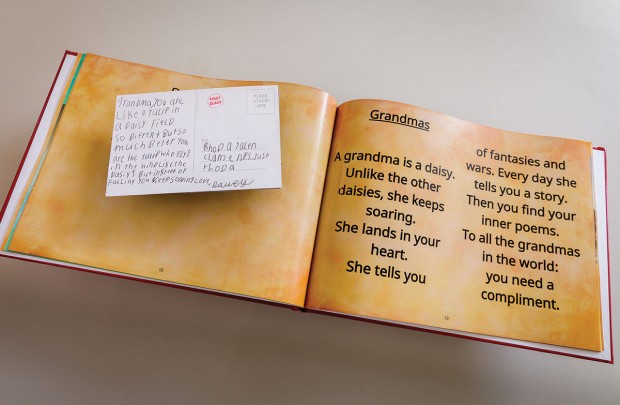 At the time Lizzy sent Rhoda the poem, they had not seen each other for a year. “I was not expecting [the poem],” Rhoda says. “I was sitting here reading it and just crying, because I couldn’t spend Passover with them.”

She adds, “It was a heart-stopper for me when she sent it because I generally see all four of my grandkids in Boston at least every six weeks. The quarantine was so sad for all of us, the anguish of being separated from our grandkids.”

For her senior writing class at Phillips Academy Andover, Lizzy chose a class called Writing for Change. “Usually, we would get to meet with underprivileged kids and help them write, but because of Covid, we did free writing. My grandma had been a little bit sick – nothing big – but she was on my mind, and I had this great opportunity to sit down and write about her. I have always found writing to be quite therapeutic, a nice way to dump all of your emotions out on the page.”

Lizzy enthusiastically makes a point of mentioning that just because the poems she wrote in class are about her grandmother, “It doesn’t mean I love my grandpa any less … we love him as well!”

Sophia, a sophomore at Tulane University, writes poems her grandmother describes as “deep.” And Michael, 16, writes, too. “Michael has written some poems about his sisters,” she says. “I have a collection of all my grandchildren’s poems.”

Part of that collection includes a special keepsake book of poetry entitled The Heart Breathes: Poems From The Heart that Davey, 11, sent his grandmother. “His teacher had introduced the class to haiku and Maya Angelou,” Rhoda says. “At the end of the year, she took all of their poems and made a hardcover book with illustrations. Davey sent a copy to me. It was dedicated, “to my grandmother Rhoda Clamen.’”

A grandma is a daisy.

Unlike the other daisies, she keeps soaring.

She lands in your heart.

She tells you of fantasies and wars.

Every day she tells you a story.

Then you find your inner poems.

To all the grandmas in the world: you need a compliment.

Rhoda keeps the little book by her bedside, along with a postcard tucked inside that Davey had sent her about a year before he penned the book. The card was addressed to Rhoda and Allen Clamen, but then Davey added P.S. – just Rhoda. “On the postcard, he had written a poem about a grandmother – me – that just blew me away.” It read:

So difrent but so much Better

You are the tulip who Fly’s in the wind

But instead of Falling you Keep soaring

Through the years, the Clamen grandchildren have been influenced by their grandmother’s poetry. For her part, Liane also writes short stories and essays.

The family’s strong ties transcend words. Calendars fill with annual trips to Cape Cod and other multi-generational vacations to places like national parks, beaches, Europe, even RV trips. Rhoda and Allen speak with their grandchildren daily. “One of them calls me with a worry du jour, or to tell me happy things,” Rhoda says. Allen tutors them in math via FaceTime.

Rhoda’s advice for such a close bond: “Accept each kid,” she says. “Don’t judge. So they are able to come to me and tell me anything, and I just listen. That’s what they need.”

“We are keeping the family as close as we can, sharing memories,” Allen says.

“And we missed a year of memories,” Rhoda laments. “When I finally saw them, they were suddenly all so tall and so different. A real big change.” The reunion happened this spring, when Rhoda and Allen were vaccinated and traveled to Boston. “What can I tell you?” Rhoda says. “We couldn’t stop hugging and hugging and hugging.”

Lizzy says she and her siblings don’t really think of Rhoda and Allen as separate from their nuclear family. “They are a big influence in our lives,” she says, speaking for herself and her siblings. “My grandmother has taught my sister and me to be strong and independent, and my grandfather is the kindest man you’ll ever meet, such an important role model for my brothers.”

Like a second set of parents, Rhoda and Allen drove to New Orleans to move Sophia out of Tulane. “We all went to move her in,” Rhoda says. “We rented a house and stayed a week and made a little vacation out of it. This year, Allen and I moved her out. Rather than her mother coming all the way from Boston, we just drove. Sophia said, ‘I can’t imagine what would happen to someone who didn’t have grandparents.’”

Every anniversary, he buys her one rose for every year they had been married

A love like the eternal flame that hangs in my synagogue

Carefully tended to and never ignored, never going out despite its flicker

Every morning they walk around the park together, holding hands in the Texas heat

They speak English but often slip into Yiddish, the dying language of my ancestors

When I was younger I thought they spoke a secret language

A way to communicate without us understanding

They grew up in the same small “shtetl”

A small Jewish neighborhood in Montreal

They didn’t know each other when they were younger

Luck brought the two together on a blind double date

They dated off and on

When he wasn’t ready for a commitment, she left

He came chasing after her

He was quiet, intelligent, and kind

She was beautiful, independent, and strong

On August 18 of this past year, 57 red roses arrived at her doorstep 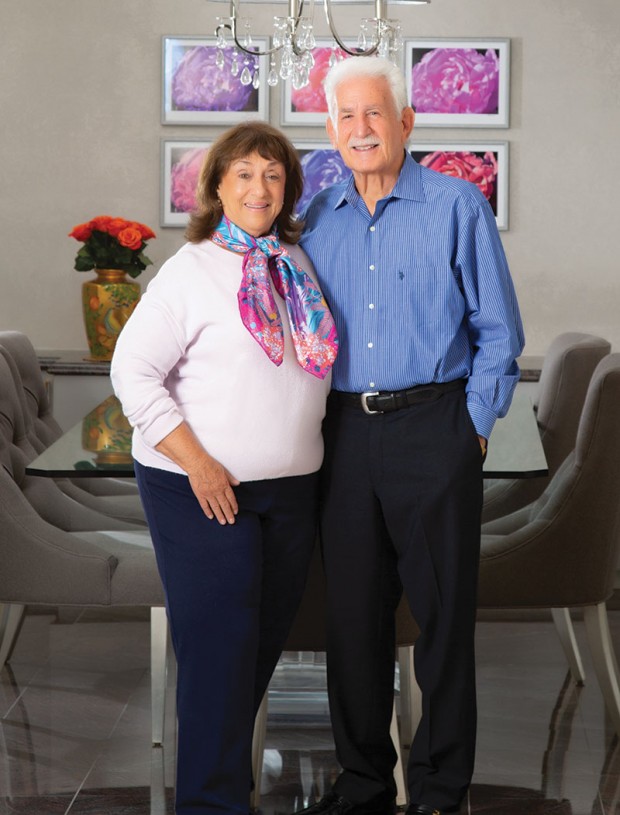 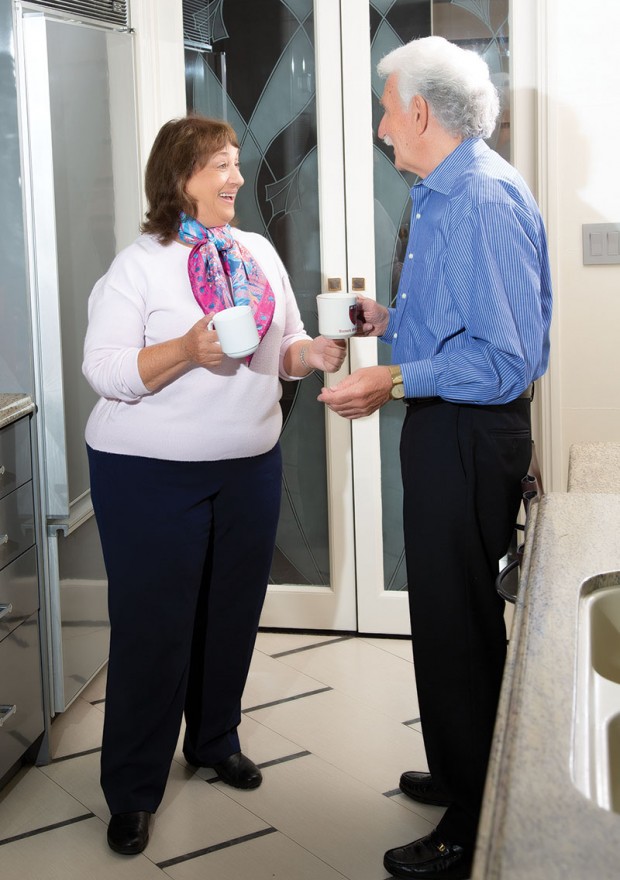 After nearly 60 years of marriage, Rhoda and Allen still have lots to talk about and are a constant source of inspiration for their children and grandchildren. (Photo: lawellphoto.com) 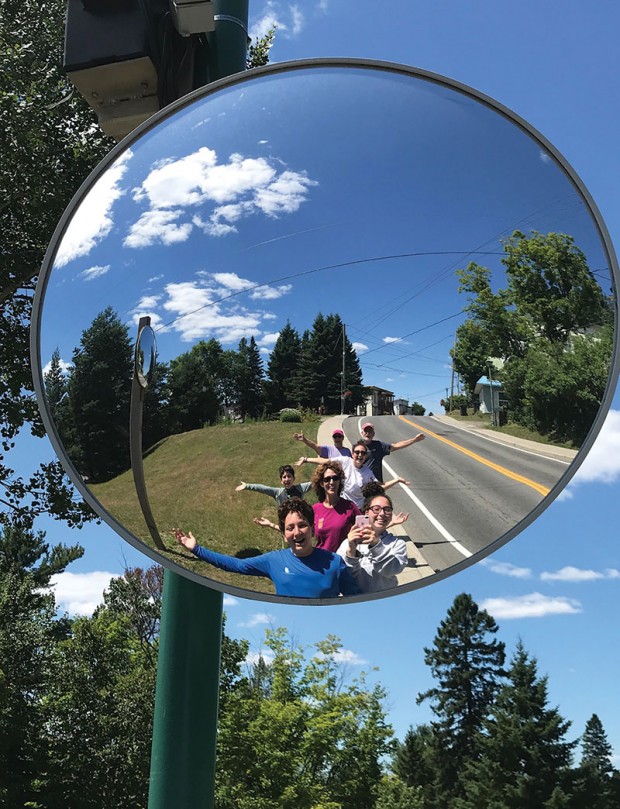