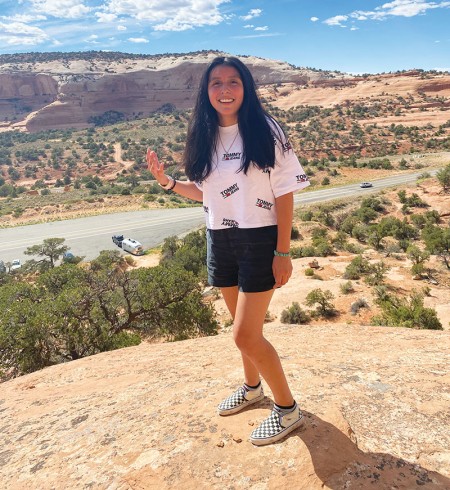 SPEAKING UP Rebecca Jackson, a junior at St. Francis Episcopal, speaks out against animal testing. She has a beagle, which she says is the most commonly used breed of dog in animal testing.

While animal testing has been around for decades, most don’t understand how severe it is. The most commonly used breed in animal testing is beagles. They have big eyes, a keen sense of smell, and a sweet nature. All of these attributes make them perfect for it.

Beagles are pack animals and were originally bred for hunting. Currently, beagles are known as excellent companions and are popular in dog shows. I have owned four beagles. My current beagle’s name is Paco. He was rescued and adopted by my family when I was six. He is very social, loves attention, and, like most beagles, only listens to his nose!

When I started reading about animal testing, I was heartbroken when I saw 95 percent of the dogs were beagles. Some of the common practices mentioned during animal testing include cutting beagles’ vocal cords so they don’t communicate with other dogs, inserting chemicals into their eyes, and applying chemicals to their skin to test for human safety. While some beagles are taken off the street, others are bred for testing. Most of them have never seen the sunlight or even been outside.

While many animal-rescue organizations try to save these dogs, the only way to stop animal testing is through education and action. There are apps you can download that will scan products and let you know if its animal testing-free. Don’t purchase products that utilize animal testing. Additionally, you can also donate and volunteer at local rescue dog centers.

Since learning about animal testing, I now look at my beagle differently. I’m thankful he was rescued and placed with my family instead of being placed in a facility. I am mindful of my purchases. It’s worth knowing my actions aren’t hurting animals. Each beagle deserves a life as happy as my dog’s. I struggle sharing my voice because often people will say they don’t want to hear it. Not hearing about it isn’t going to mean it doesn’t exist or make it go away.