Strake Jesuit College Preparatory recognizes that the transition from middle school to high school is significant. To assist its incoming freshman with this change, the school has an orientation program in place. During these three days, upperclassmen, called Crusader Crew, lead the freshmen in various activities in order to get them familiar with the campus, their classmates, and the culture of the school.

On the first day, the freshmen arrive and get placed into one of eight houses, which are named after the eight Jesuit saints. These are groups that the freshmen stay with for the rest of the three days and the remainder of high school. Each Crusader Crew leader gets assigned a group of five freshmen to lead. This gives the freshmen someone who they can feel comfortable asking questions of and talking to. 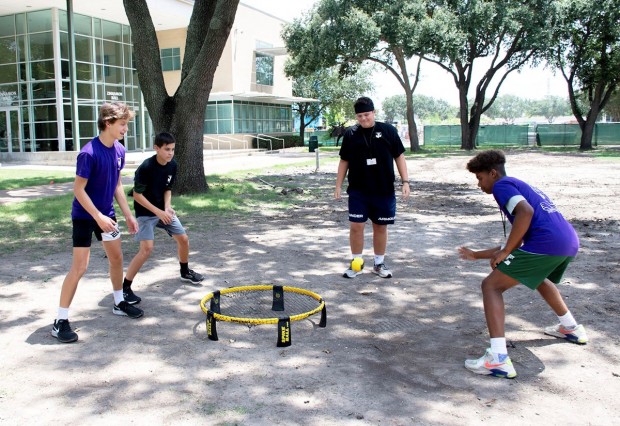 The first day is mainly used to build connections between the freshmen and ease the nervous energy that many have coming to a new school. Some of the popular games that are played on the first day are tug of war, spikeball, dodgeball, and knockout.

The second day is when the freshmen get more familiar with the school itself. It consists of a campus tour, a walk through their class schedule, and mass.

First is the tour of campus, which the Crusader Crew leads. It is a general overview of all the buildings, which helps the freshmen find the locations of their classes.

Schola Brevis, is the main feature of the day, and it is an opportunity for the freshman to experience their classes, in shorter, 20-minute sessions. This gives them a chance to meet the teachers and get a feel for the class before school starts.

The final part of the day is a mass that the whole freshmen class attends. It goes over the principles of Strake Jesuit and the basics of the Catholic faith.

The third and final day of orientation is all about getting ready for the school year, which starts the following day. On this day, freshmen set up their technology, get their school pictures taken, and spend some more time with the Crusader Crew leaders.

“The best part of orientation was playing knockout and tug of war for the house competition because it built a sense of brotherhood,” said freshman Peter Cyr.

Positive responses like this one are common among the program’s participants and why Strake Jesuit has made Freshman Orientation a part of the school’s tradition.