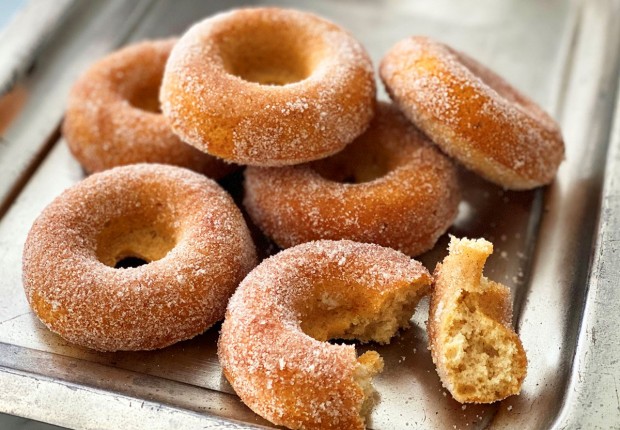 These homemade doughnuts are satisfying and delicious.

This was a first: doughnuts made at home. And not just any doughnuts, but Apple Cider Doughnuts. Baked. How hard could they be?

Come to find out, not hard at all. If you can make muffins (and this recipe could be made into muffins if you don’t have a doughnut baking pan), you can make these.

We got into the Apple Cider Doughnut spirit because Tuesday is Rosh Hashanah, the holiday that marks the Jewish New Year. Traditionally, we serve apples and honey, or an apple-honey cake, to wish each other a sweet year. But a home-cook reviewing this recipe on NYT Cooking said she ditched the apple cake in favor of Baked Apple Cider Doughnuts. How clever! we thought.

Whether or not you’ll be celebrating Rosh Hashanah, Baked Apple Cider Doughnuts are worth making, and would be a fun project with kids. While we love a good Shipley’s every once and a while, baking doughnuts in your own oven happens to be pretty satisfying, and pretty delicious.

In the bowl of a stand mixer fitted with the paddle attachment, cream 10 tablespoons butter, brown sugar and 1/4 cup granulated sugar on medium speed until light and fluffy, 3 to 4 minutes. Add the eggs one at a time and mix until well incorporated after each addition, scraping the bowl as necessary. Beat in the vanilla extract.

Add the flour mixture and mix on low speed until incorporated. With the mixer running, add the apple cider in a slow, steady stream and mix to combine. Scrape the bowl well to make sure the batter is homogeneous.

Spoon the batter into prepared doughnut pans, filling them about 2/3 of the way. (You can also do this using a disposable piping bag or a resealable plastic bag with a 1/2-inch opening cut from one corner.) Bake until evenly golden brown and a toothpick inserted into the center of the thickest portion comes out clean, 12 to 15 minutes. Rotate the pans halfway through baking. (If you are making muffins, divide batter evenly between the prepared cups and bake for 15 to 20 minutes, rotating halfway through.)

While the doughnuts bake, whisk the remaining 1/2 cup granulated sugar and 1 teaspoon cinnamon together in a small bowl to combine. In a separate small bowl, melt the remaining 6 tablespoons butter in the microwave. Let the doughnuts cool for 5 minutes after baking, then unmold them from the pans, brush with the melted butter and dredge them in the cinnamon sugar while they are still warm. Serve immediately, or let cool to room temperature.