For the Blue and Gray: Fans of Rice Football 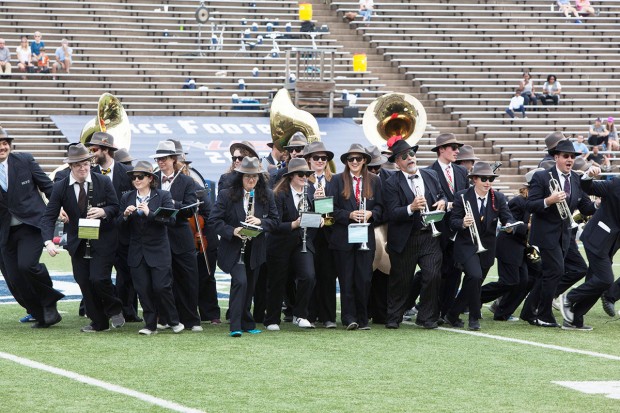 Rice Stadium has been the setting for numerous historical events including President John F. Kennedy delivering his inspiring “We choose to go to the moon” space exploration speech in 1962 as well as Super Bowl VII in 1974 with over 70,000 fans watching the Miami Dolphins vs. the Minnesota Vikings. The Houston landmark celebrated 70 years in 2019.

But through the decades, the main attraction at Rice Stadium has been Rice football games. Owl lovers share special ways that Rice Football has given fans something to cheer about through the years. 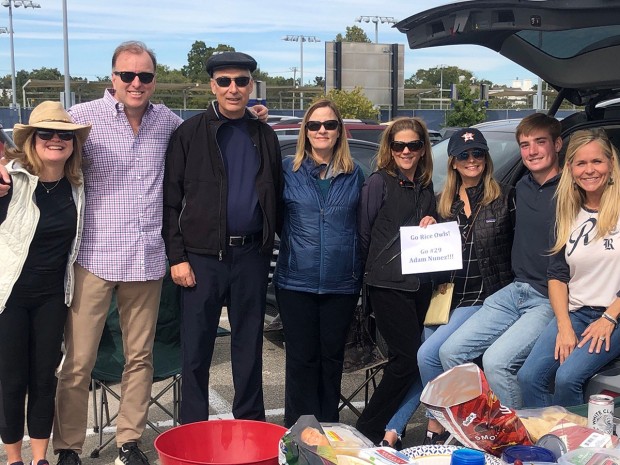 Adam Nunez, who grew up in West University, was a punter on the 2019 team. Adam's mom Renae loved having Adam play so close to home. “When he was little, we would sometimes come watch games. It's a really great family atmosphere and very convenient to attend a game with easy parking.”

Renae recalled, “An extra special game was the time our neighbors from Mercer Street came out to tailgate and cheer on Adam and the Owls.”

After receiving his MBA from Rice, Adam currently works in the accounting field here in Houston and still enjoys rooting for the Rice Owls. 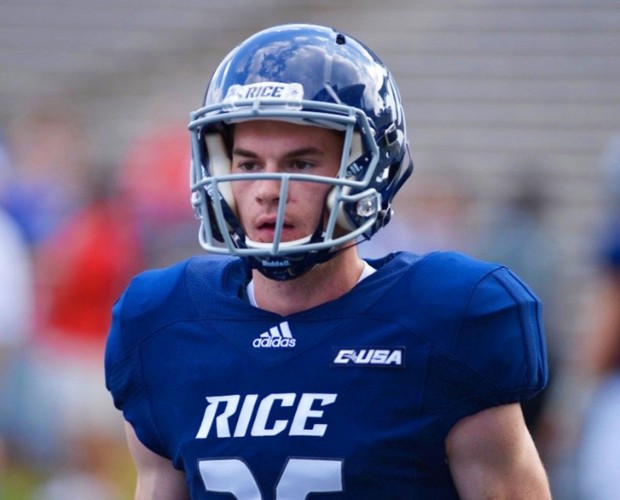 Nick Sorensen, wide receiver for the Owls in 2017, loved playing for Rice Owls and enjoys going back to cheer on his old team.

Nick Sorensen, wide receiver for the Owls in 2017, reflected, “Game days were the best because it’s when we all came together and put all of the hard work to the test. It was just really satisfying to be part of this team; it’s history and I know that so many people are pulling for us.”

Nick’s father Randy agreed that the football and academic program is special. “Rice football players put in an enormous amount of time. Very early days and very late nights are normal year-round. But in the end, the Rice degree is worth the extra work. Everyone takes the expectation for academic excellence seriously and it's reflected in Rice Football having the highest GPA in their conference year after year even though the classes are most certainly more difficult.”

These days, Nick is working toward his graduate degree in business at Rice and looks forward to cheering on former teammates. This fall, he also looks forward to supporting his younger brother, Josh Burrell, wide receiver for the Bellaire High School football team. 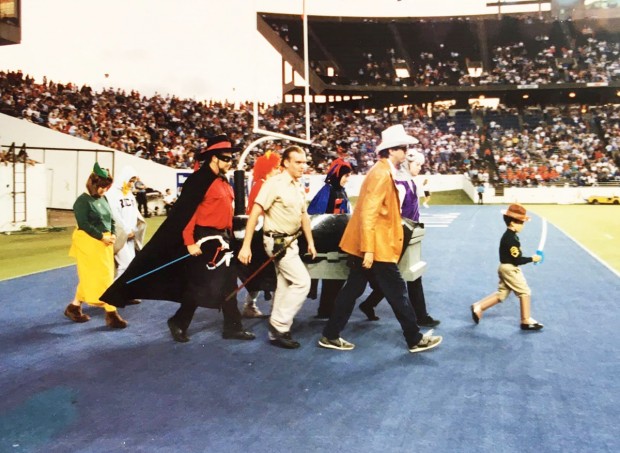 The last halftime show of the Southwest Conference on December 2, 1995, Houston vs. Rice. The Pallbearers represent the mascots of the 81-year-old Southwest Conference teams that were being disbanded. Here, John Szalkowski is the Red Raider, and his son Matt is the Aggie with the saber. Matt later attended Rice and was a show assistant in The MOB. (Photo courtesy of Alice Gifford)

Some of the most outrageous football plays that happen on the field during a Rice football game are not played by the football players, but instead by the legendary Marching Owl Band also known as The MOB (The Band that Never Marches). MOB is not a traditional band. Members do not march and some play non-standard instruments. Instead of marching band uniforms, they wear “mob-like” pin-striped three-piece suits, ties, sunglasses, and fedoras.

There are show assistants who do not play instruments during half-time shows but instead act out gags and skits (often making fun of rival universities’ traditions).

Alum (’92) Elisa Macia Donovan shared, “I loved that the MOB had an entire violin section - those orchestra kids finally had a chance to be included!” (Unique instruments include violins, violas, a cello, electric guitar, electric bass and electric piano).

Another unique feature of the band is that alumni and their children are allowed to play in the halftime show. 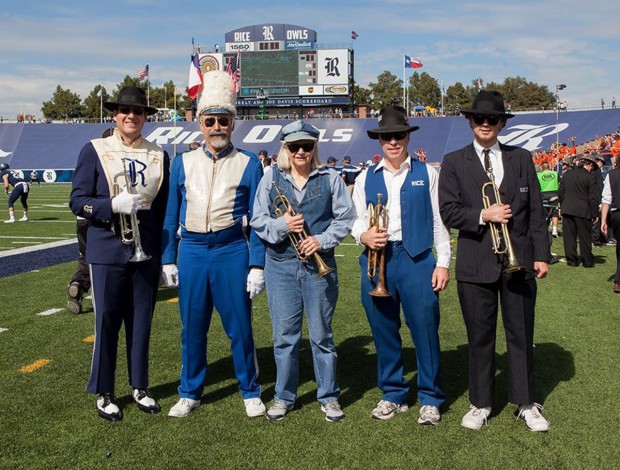 John “Grungy” Gladu has been marching in the band since 1973. “The MOB is musicianship, performance, school spirit, camaraderie, and humor rolled into one. It has fulfilled this band-geek’s need to play my instrument with others. I've worn many hats, literally and figuratively. Literal: four different uniforms, figurative: trumpet, music librarian, script consultant, announcer, photographer, historian, and old-fart.” 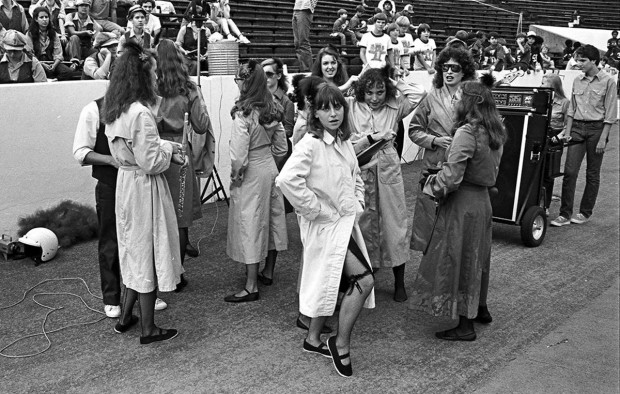 Buzz-area MOB alumni include West University Mayor Susan Sample. Susan was thrilled to follow in her father’s footsteps and attend Rice. In addition to making MOB appearances, she was also on the Rice swim team. Susan and her family enjoy being season ticket holders and showing their Rice spirit at games.

Mario and Jennifer Macia met on their very first day at Rice right about 34 years ago and it has been an Owl love story ever since! While students they enjoyed going to games and it was affordable entertainment. Over the years, they have been season ticket holders and have fond memories of taking their daughters Sarah and Anna, now college students themselves. 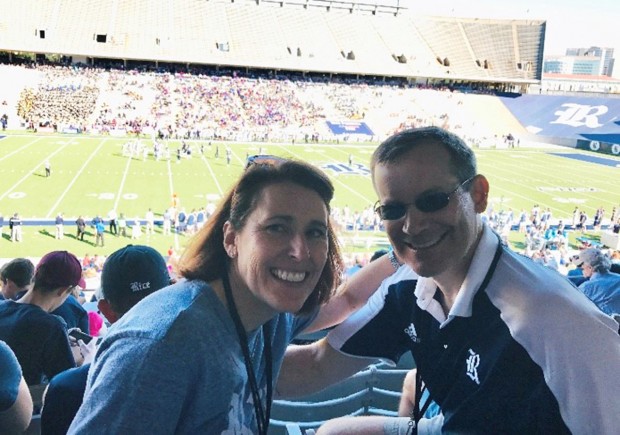 Alumni Jennifer and Mario Macia enjoy going to Rice football games and have many fond memories of going to games when they were students.

Jennifer shared one of the best secrets about Rice Stadium: “If you climb to the very top of the bleachers, you will see some of the most amazing views of downtown Houston and the Medical Center.”

The first Rice home game takes place Sat., Sept. 11, 5:30 p.m. at Rice Stadium vs. The University of Houston. The 40th Bayou Bucket Game is the crosstown rivalry between UH and Rice - the universities are five miles apart. 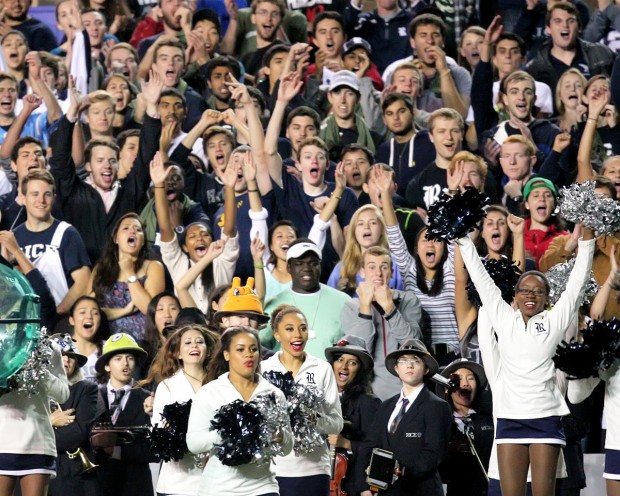 Rice students on their feet cheering for their Owls. (Photo courtesy of Rice Football Communications) 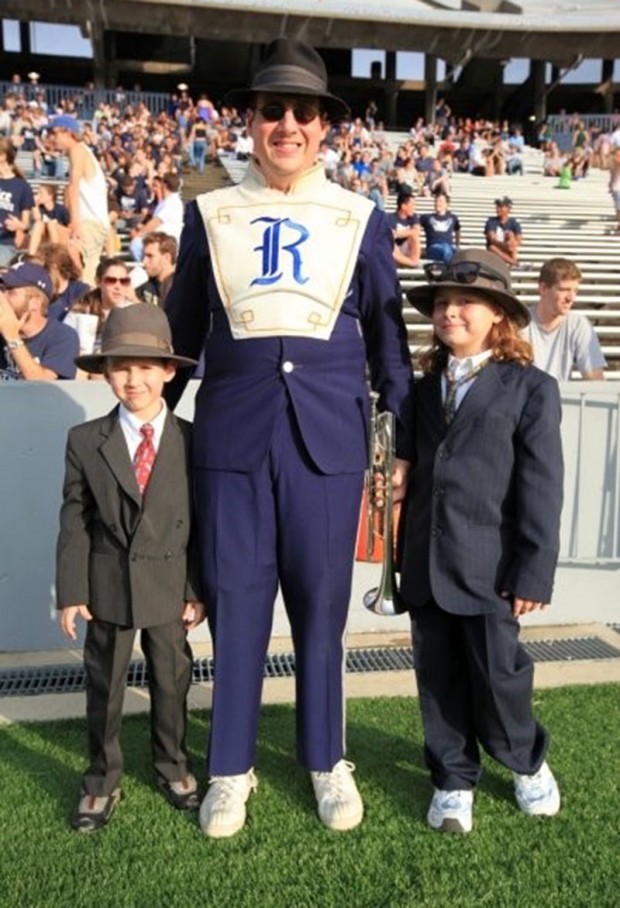 Another unique feature of the band is that alumni and their children are allowed to play in the halftime show if they come to rehearsals and get familiar enough with the music. Pictured, in 2009, is Timothy (5) and Meg McDonald (8) wearing their own mini-MOB uniforms to join their parents, Laura and Robert McDonald (pictured in vintage Rice Band uniform) for Rice Homecoming. Meg performed regularly with the MOB as a Show Assistant for 10 years, before joining her alumnus dad in the trumpet section, where he still plays.