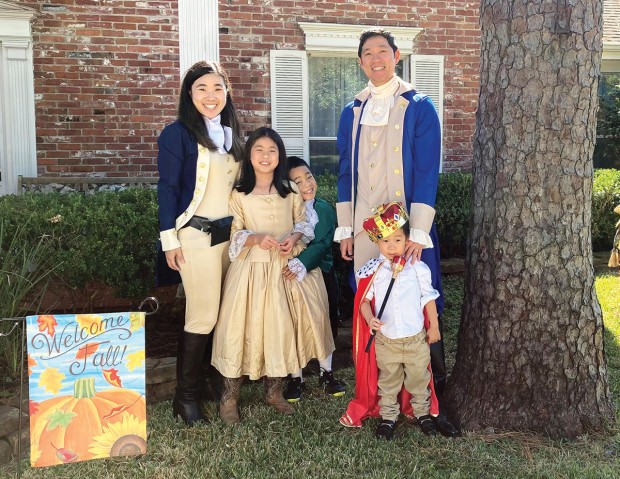 PROJECT HALLOWEEN The Yu family –  Raymond and Gina, 8-year-old Lyana, 6-year-old Matthan, and 4-year-old Jakin – dress up together every Halloween. Last year, they dressed in a Hamilton theme.

For certain fun families, Halloween is a group effort. Gina and Raymond Yu – along with kids Lyana, Matthan, and Jakin – dress up every year as a family in group-themed Halloween costumes.

The Yus do not take Halloween lightly. Gina, an investor and entrepreneur, starts the process of pulling together five costumes weeks ahead, finding accessories for each character.

Their Halloween family-costume tradition started almost a decade ago. For oldest daughter Lyana’s first Halloween, they assembled various bits and pieces to create costumes from the old comic strip Popeye the Sailor Man, with Raymond as Popeye, Gina as Olive Oil, and 6-month-old diaper-wearing Lyana as Swee’Pea. Raymond’s nude body suit had fake muscles, and he wore a sailor hat and held little Lyana in her red felt dress.

Gina says taking a lot of photos that first year slipped their mind, so they have only one picture, but now, they document their Halloween well. And they are hooked on their costume tradition.

Each year, these days, the whole family – parents, 8-year-old Lyana, 6-year-old Matthan, and 4-year-old Jakin – selects a popular movie or TV show of the year to dress up as together.

They picked the Disney show PJ Masks in 2019. Last year was Gina’s favorite, when they dressed as characters from Hamilton. Jakin, 3 at the time, was King George and wore his costume all week long. In 2018, they dressed as the family from the movie The Incredibles. Gina says the kids’ personality traits even matched up with their characters.

On Halloween night, the family sets out to their neighborhood’s annual parade one block from their house; the parade wraps around street by street. They trick-or-treat, filling their bags with candy. Once it gets dark, they head home to spend the rest of the evening handing out candy together from their doorstep. “We live near a bustling intersection, so we get plenty of foot traffic late into the night,” said Gina.

When they were younger, their kids were allowed to eat 10 pieces of candy on Halloween night, but their limits increase each year, and less candy gets saved for the family stash.

People-watching on Halloween night is their favorite part, says Gina. “Our family loves seeing others in costume and also being seen in costume.” She said she feels like other parents walking the streets with candy-filled bags have an “unspoken understanding” of exactly how much thought and effort went into each costume. “We can all appreciate the work behind the festive environment.”

Gina says it is all about the process – they plan early and keep it thrifty by pulling bits and pieces from various websites and stores. “For the PJ Masks villain [Romeo], I ordered a lab coat, safety goggles, and rubber gloves, which double as dishwashing gloves,” said Gina. “We like to be resourceful with our costume accessories.”

The Yus also reuse the costumes for other events they attend, such as the Texas Renaissance Festival and their school’s storybook parades.

As some of you know, Halloween-costume plans don’t always work out, especially when there is a toddler involved.

Shannon Richey, who works in interior design, checked off an item on her to-do list last year by ordering her then-2-year-old daughter Hollan’s Halloween costume – Poppy the troll. “She was very much into Poppy and Trolls,” said Shannon. “I was pleased that I was ahead of the game and did not have to scramble last minute.” Shannon and her husband Dylan were all set (or so they thought).

The costume arrived and Hollan was so ecstatic about it, that is until Halloween night rolled around. In true toddler form, one hour before her neighborhood’s annual Halloween parade, Hollan decided she did not want to be Poppy. No way. She wanted to be a ghost.

Shannon says she didn’t have time to play tough or convince Hollan otherwise. She was on her neighborhood’s Halloween parade committee and needed to get there early to help set up.

The resourceful mom and dad grabbed an old pillowcase, cut circles for heads and arms, and painted Hollan’s face white. “Dylan went a little crazy on the face paint, so we didn’t let her look at herself in the mirror to avoid another ‘I don’t like it’ moment,’” Shannon said, laughing. Shannon says she plans to wait until Halloween is much closer to order costumes this year. 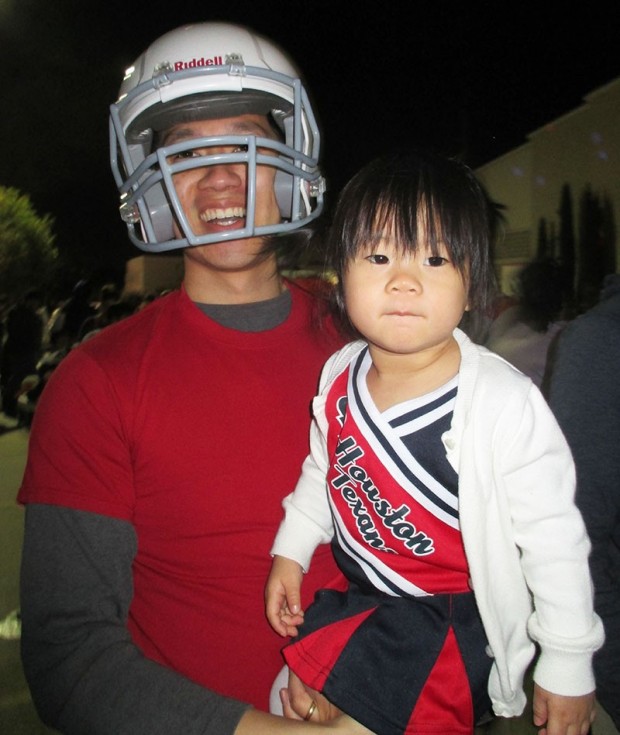 Raymond and Lyana Yu dress up as a football player and cheerleader. 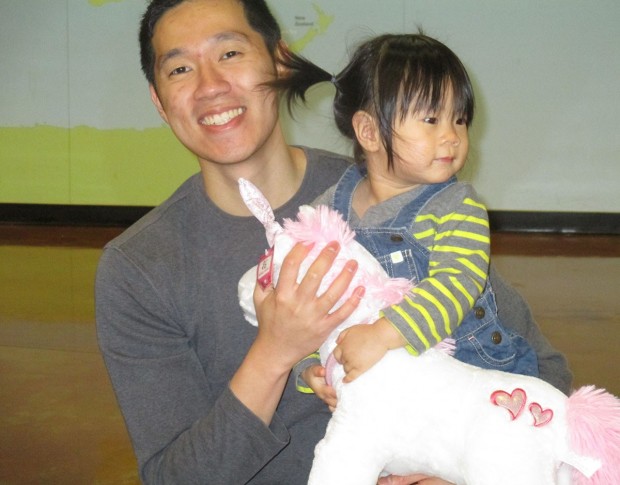 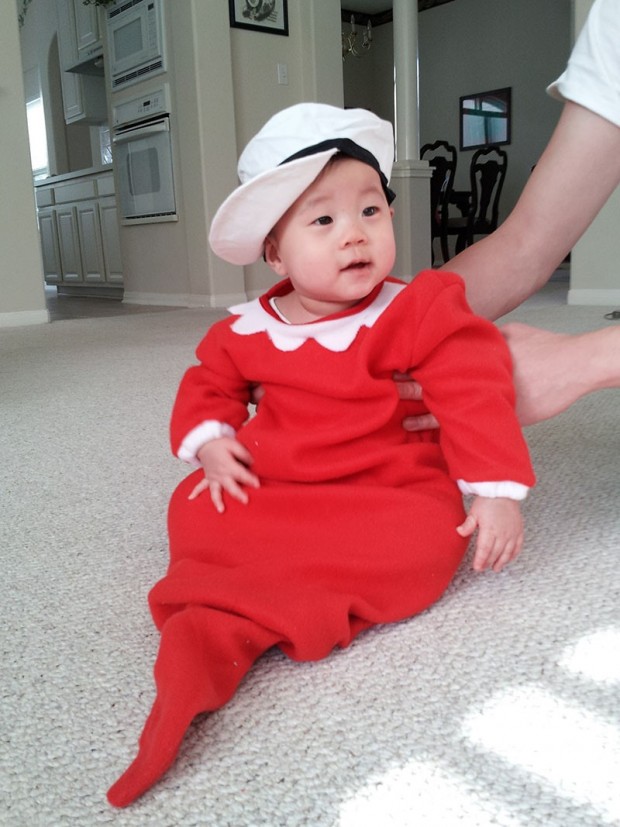 Lyana Yu (pictured, at 6 months) dressed up as Swee’Pea from Popeye the Sailor.