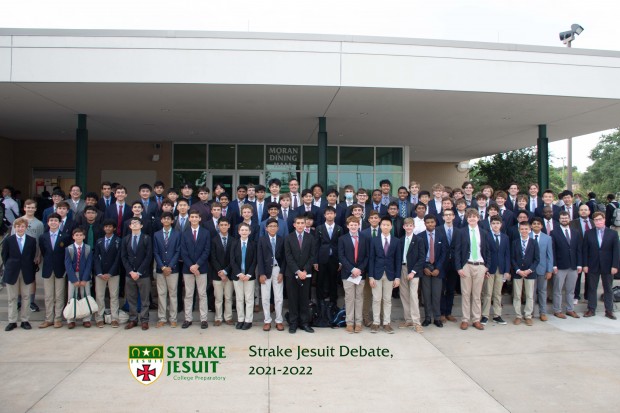 Strake Jesuit Debate Team is ready for a competitive year.

The Strake Jesuit College Preparatory Lincoln-Douglas debate team has hit the ground running this school year after their record-breaking season last year. Debate teams from all over the United States send debaters to compete in national circuit tournaments for Lincoln-Douglas debate, a one-on-one event that involves arguing for or against a bimonthly topic through a philosophical, critical, and policy-making lens.

Debaters compete for bids to the prestigious Tournament of Champions (TOC), held at the University of Kentucky every Spring. Each debater must earn at least two bids to qualify for the tournament - these can only be awarded to those who reach late elimination rounds at national circuit tournaments, yet the Strake Jesuit team consistently outperforms the rest by earning them weekend after weekend.

For the 2020-21 school year, the team claimed the title of bid leader by earning a whopping 57 bids (a school and national record!) to the Tournament of Champions, qualifying a handful of debaters to the most prestigious debate tournament in the country.  In context, the only school that came close to this achievement earned 39 bids.

The team also excels at the local and state level; debaters need to earn 12 state points to qualify to the Texas Forensics Association (TFA) State tournament by competing in tournaments in the Houston area just as they need to earn two bids for TOC by competing in national circuit tournaments. Jesuit qualified a record-breaking 18 Lincoln-Douglas debaters to TFA State this past year, and they plan to shatter the record for both state and TOC yet again this year.

Just like any sports team, Strake Debate would not be worth anything without its coaches – it’s no surprise that a team as successful as this is led by the best coaches in the nation. The Strake Jesuit Lincoln-Douglas Team is coached by Mr. Chris Castillo, who works with head coach Mr. Jerry Crist to produce the best debaters our school has to offer. Coach Castillo spoke with me about the many working parts that make the team as successful as it is.

“A lot of elements go into making the Strake team so successful. It starts from the top. We have an administration that is extremely supportive,” he said. “A program cannot sustain year-to-year excellence without an excellent head coach. Jerry Crist is the engine that keeps the machine running. The team would not be where it is without him and his dedication. Finally, we are lucky to have some of the smartest and hardest-working students in the country.”

Coach Castillo, along with Mr. Crist and Strake’s administration, play a crucial role in the development and sustainment of the team. The late nights, early mornings, and consistent leadership and instruction necessary to direct a team of Jesuit’s caliber use up tons of time and energy, but it’s all worth it for Coach Castillo.

“I think debate imparts some of the most important skills young people need. No other activity teaches critical thinking, research skills, public speaking, and writing the way debate does, said Coach Castillo. “I also enjoy seeing students progress from year to year and reach goals they previously thought unattainable.”

Participating on a debate team may not work for everyone, though – it requires more time and energy than most people can allot. Here are some tips from one of the best debate coaches in the nation for anyone who does not want to join a debate team, but still seeks to become more open-minded, learn argumentative skills, and become more involved in current events and politics:

“Good argumentation starts with good research.  Read what the experts have written on the subject before you jump into a debate.”

“You don't have to win every argument to win a debate. It's ok to be wrong sometimes as long as you can explain why the arguments you are winning are more important than the ones you are losing.”